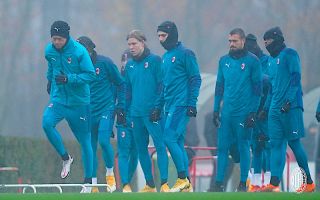 AC Milan boss Stefano Pioli is set to make several changes to his starting XI for the visit of Celtic on Thursday night, according to a report.

The Rossoneri go into the game knowing that they are 90 minutes away from either having their qualification secured or will face another dreaded winner-takes-all shootout in the sixth round of matches, just as they did in 2018-19 when they were dumped out by Olympiakos. You can read our match preview here.

According to reports from Peppe Di Stefano for Sky (via MilanNews), Pioli seems ready to make several changes in view of the visit of the Scottish champions.

In defence, Diogo Dalot is expected to come back into the starting XI as is Matteo Gabbia, with the latter replacing Alessio Romagnoli but it is not declared whether the former would come in for Davide Calabria or Theo Hernandez.

Franck Kessie could be partnered by Rade Krunic in the centre of midfield, while the three behind Ante Rebic should be Samu Castillejo, Hakan Calhanoglu and Jens Petter Hauge.