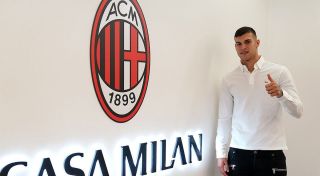 Sky: New signing could be set for first involvement in Sunday’s game against Cagliari

New signing Pietro Pellegri should be able to play some part in Sunday’s first home game of the season against Cagliari, a report claims.

It was confirmed yesterday that Pellegri has joined Milan on an initial season-long loan deal which includes an option to buy that will turn into an obligation to buy once certain conditions are met.

As reported by Sky Italia (via MilanNews), the 20-year-old underwent his second training session at Milanello today while yesterday he took part in a friendly game against the Primavera team.

It is therefore very likely that Pellegri will be on the bench for Sunday’s match against Cagliari, meaning he could make his first appearance for the club just a few days into his time with the Rossoneri.