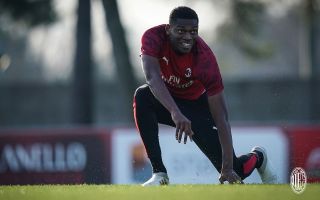 Sky: Pioli experiments in training with new line-up – Leao up front and Calhanoglu out wide

AC Milan head coach Stefano Pioli made a key tweak to the formation he tried during Friday’s training session at Milanello, a report claims.

Speaking to Sky Italia (via MilanNews), journalist Manuele Baiocchini gave some training news in view of the match against Atalanta, one which will decide the club’s top four fate and therefore it is imperative that Pioli gets his choices right.

He remarked that  Friday’s training is usually always quite indicative of what Pioli is planning to do as it proved to be for Brahim Diaz’s selection in the eleven against Juventus. The big news is that Pioli tried Rafael Leao in place of Ante Rebic as centre-forward, with Brahim Diaz the attacking midfielder, Calhanoglu on the left and the rest as usual.

Pioli is changing a lot and wants to keep everyone on their toes and it could be that Leao was tried there to give him an extra bit of motivation.