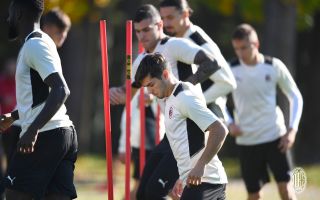 Sky: Pioli grants squad a day of rest but over half of the team show up at Milanello

A good number of the AC Milan squad showed up for training this afternoon despite being given a day of rest by Stefano Pioli, a report claims.

Milan are on a winning streak in Serie A that now stretches to six games, but the last three victories did not come easy. First was the comeback against Verona to win 3-2 having been 2-0 down at half-time, then was the 4-2 against Bologna when the team gave away a two-goal lead against ten men, and finally the difficult 1-0 victory against Torino on Tuesday night.

It is also worth noting that a very difficult trio of games awaits with Roma away on Sunday night next, then a must-win Champions League game against Porto at home on Wednesday and then the derby against Inter on 7 November, before the international break.

Sky Italia (via MilanNews) writes that Pioli gave his squad a day of rest today but more than half of the team showed up at Milanello anyway to do some work. It is yet another sign that the group have a great desire to stay together and work even on the days off they are granted.

READ MORE: Abate reveals what it is like coaching Milan’s U16 side and describes his tactical approach