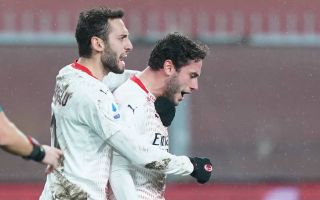 Sky: Pioli has two ideas in mind for if Tonali does not recover to face Lazio

AC Milan have two ideas in mind for the game against Lazio if Sandro Tonali is not fit enough to take part in the game, a report claims.

As Sky Italia report (via MilanNews), in the next few hours the condition of Tonali will be evaluated, who yesterday against Sassuolo was forced to leave the field at half-time due to a muscle strain.

Ismael Bennacer will be out until the new year with a muscle problem while Franck Kessie will be suspended for the next game, meaning Rade Krunic is the only recognised midfielder left at the moment.

If Tonali does not recover, Stefano Pioli would have two ideas in mind on who to deploy in the middle of the field together with Krunic.

The first involves moving Hakan Calhanoglu back from his usual playmaker role into a deeper position, while the second would see Davide Calabria move over from right-back and then Diogo Dalot would slot in there.