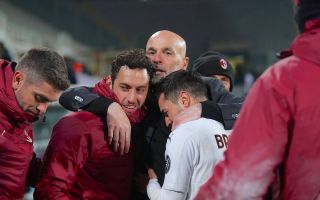 AC Milan head coach Stefano Pioli tried a different system in training at Milanello today in view of the six-pointer against Juventus this weekend.

Sky reports (via MilanNews) that news has come from Milanello about an important potential tactical change for Sunday’s match against Juventus. This morning, among the various approaches used, Pioli also tried the 4-4-2 with Alexis Saelemaekers on the right, Hakan Calhanoglu on the left and Brahim Diaz alongside Zlatan Ibrahimovic up front.

Pioli has actually deployed such a system before, as we saw the 4-4-2 in action in a couple of recent home games during which Ibrahimovic was injured, namely the ones against Genoa and Sassuolo.

Pioli spoke after the Genoa game about how he wanted Rebic to essentially play close to Leao to support him up front, and it became apparent that a 4-2-2-2 (basically a 4-4-2) was being used against Sassuolo, as we picked out in our tactical analysis of the game.

EXCLUSIVE: All the information regarding Milan’s 2021-22 home shirt – design, inspiration and record sales

CM: Milan lacking the economic resources for a Scudetto win – a crossroads approaches for Elliott
24 January 2022, 18:57
Serie A Standings