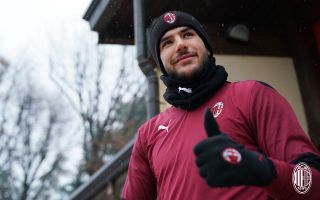 AC Milan will travel to Verona to face Hellas with their injury situation having developed into a full emergency, a report claims.

Milan seemed to have found the right form again with what was a strong win at Roma, restoring some much-needed confidence. However, they followed it up with a frustrating 1-1 draw against Udinese.

The Rossoneri were without some of their key players, such as Hakan Calhanoglu and Zlatan Ibrahimovic, and this was very evident during the game. And with that result, it’s indeed very hard to tell where they stand ahead of Sunday’s clash vs. Verona.

According to Sky (via MilanNews), Milan will arrive in Verona in total emergency. In addition to the absent sextuplet of Ibrahimovic, Calhanoglu, Bennacer, Mandzukic, Rebic and Daniel Maldini, there are three more players who are not fit enough to start.

Theo Hernandez and Sandro Tonali are not ready to start, and will begin the game from the bench. The full-back and the midfielder will be replaced by Dalot and Meite respectively. Hauge is also not at his best, so he will not play either.