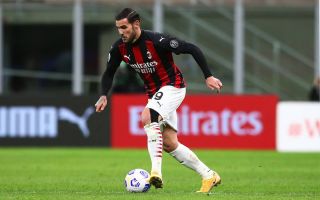 Sky pundit believes Theo should have won a penalty: “When there is such a contact it is a penalty”

AC Milan should have been awarded a penalty kick towards the end of their 1-0 home defeat to Napoli tonight, according to one Sky pundit.

Milan’s Scudetto hopes were all but ended on Sunday as Napoli ran out winners on a frustrating night at San Siro. Both sides had chances to open the deadlock, but it was Matteo Politano who scored the only goal of the game early in the second half, finishing with composure from the left side of the Milan box past a helpless Gianluigi Donnarumma after the ball was surrendered in midfield.

Substitute Ante Rebic was given his marching orders for insulting the referee in added time, and that would be very symbolic of a very frustrating evening for Milan.

The referee Fabrizio Pasqua was summoned to the VAR screen in the dying moments as Theo went down claiming he was impeded by Bakayoko, but there was rightly no spot kick awarded.

Fabio Caressa spoke in the Sky studio after the game, and stressed that the incident should have resulted in a penalty.

“With VAR, when there is such a contact it is a penalty,” he said (via MilanNews).