An update has arrived on the various injuries and selection issues that AC Milan are fighting at the moment from Sky Italia.

Pioli was forced to make four changes to his starting XI from Sunday’s win over Benevento for the game against Juventus in midweek as the Rossoneri saw their 27-game unbeaten league run ended.

Matteo Gabbia, Ismael Bennacer, Alexis Saelemaekers and Zlatan Ibrahimovic were all out injured, Rade Krunic and Ante Rebic tested positive for Coronavirus on the day of the game and Sandro Tonali was suspended.

According to the latest from Sky, there is some promising news on the horizon. Tonali will be back for tomorrow’s game as he has served his ban, while Saelemaekers, Ibrahimovic and Bennacer are all expected back by January 18 so should be ready to face Cagliari.

For Rebic and Krunic it remains to be seen how long it will take for them to test negative, while Gabbia’s injury will take more time to heal. 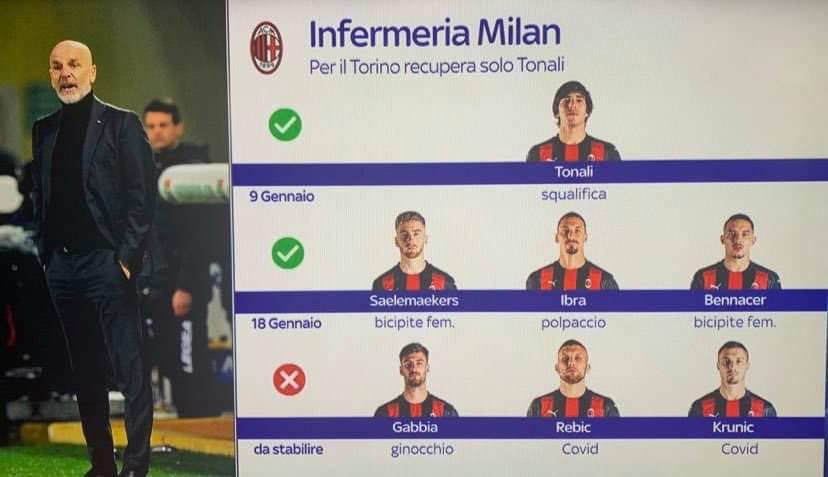 Tags AC Milan Alexis Saelemaekers Ismaël Bennacer Matteo Gabbia Zlatan Ibrahimovic
Related Articles
Tomori ‘excited’ to return but fires warning to Chelsea ahead of Milan’s visit
3 October 2022, 21:42
MN: Why Milan and other clubs have become more prone to injuries
3 October 2022, 21:23
Pellegatti gives thoughts on Leao’s renewal: “Milan only have to pay a third of his value”
3 October 2022, 20:45
Serie A Standings