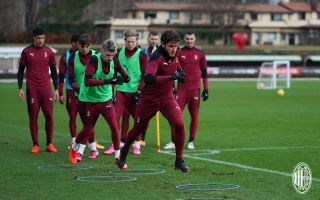 Sky: Tomori, Tonali and Calabria back in for Bologna clash but several question marks remain

Head coach Stefano Pioli will have some decisions to make regarding the starting XI he fields against Bologna on Saturday, it is claimed.

Speaking to Sky (via MilanNews), Peppe Di Stefano took stock of the current situation ahead of the game at the Stadio Renato dall’Ara, beginning by praising Fikayo Tomori and describing him as ‘a player with enormous personality, despite his young age’.

On Saturday, he will play as a starter for the first time for his new club alongside captain Alessio Romagnoli given the absence of Simon Kjaer. Davide Calabria returns to the right-back position and Sandro Tonali is very likely to start in midfield, because the staff plan to phase Ismael Bennacer back in rather than rush him.

For this reason, Brahim Diaz will not be risked either and will sit the game out. On the right there is a battle between Alexis Saelemaekers and Samu Castillejo.

Then there are three possible solutions given the lack of a No.10: Rebic on the left and Leao in behind Ibrahimovic, or Krunic as the playmaker with Leao on the left. The third option involves Daniel Maldini playing in Calhanoglu’s usual position.