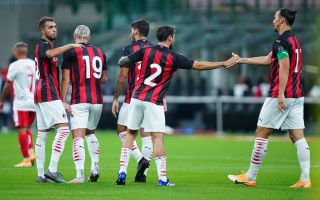 The start of the season is now just one week away, a tad more to be exact, and Milan have played two friendly games thus far. Before taking on Shamrock Rovers in the Europa League qualifiers, they will play two more.

According to Sky Italia (via MilanNews.it), the Rossoneri have scheduled a friendly game against Serie C side Vicenza on Wednesday evening. It is yet to be revealed if it will be another 60-minute game, like the one against Novara, or a full one like last time out.

Kick-off is scheduled at 17:00 and will be broadcasted on the Rossoneri’s official app, like with all the other games. Furthermore, they will take on Serie B side Chievo Verona on Sunday, which should be a 90-min game.

In other words, just four days before the Europa League qualifiers. It became clear in the game against Monza that more preparation is needed, so perhaps the friendlies will do them well. The players on international duty will also return, of course.