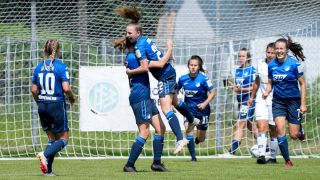 AC Milan will be taking on TSG Hoffenheim at 20:00 CET this Friday. The winner of this match will go onto the UEFA Women’s Champions League second round, and the draw for that will be made this Sunday.

You’ll be able to watch the match on Milan TV, the AC Milan app, Milan’s Dailymotion page, and on a stream provided by FC Zürich. SempreMilan recently spoke to Jasmina Schweimler to get more insight about Hoffenheim. Schweimler is a 27-years-old women’s football writer who lives near Wolfsburg, in Germany.

How did Hoffenheim fare in the Frauen Bundesliga last season?

“They played amazing last year, coming third and making it to the Champions League qualifiers which makes the season their most successful one yet. 44 points after 22 games are still remarkable (14W, 2D, 6L) for them and they were also among the teams that scored the most goals (54), only Wolfsburg (71) and Bayern (82) were better. Striker Nicole Billa ended as the league’s top scorer, grabbing 23 goals, and was also voted Germany’s player of the year.

“Hoffenheim’s potential and their quality has come through over the past years (coming third in 19/20 already too) with them making steps forward in their development every year, but people always seem to say that they have to prove themselves again and again. I didn’t think so – I knew they were capable of claiming that third spot and becoming German representatives on the international stage.”

What’s Hoffenheim‘s playing style and which players should we be aware (or wary) of?

“If you had to put it down to a specific tactic, I’d say coach Gabor Gallai prefers a 4-1-4-1 with a solid defense, a central midfielder as a playmaker, and a four-line in front with both wingers also working and helping defensively. Upfront you have a clinical and very reliable striker in Nicole Billa.

“I’ve noticed that they didn’t play long balls against Valur Reykjavik much and preferred short passing, with players making the runs behind the defensive line of Valur. Franziska Harsch and Gia Corley played a central role and were very active, distributing and contributing to the build-up and having a good eye for their teammates. Jule Brand is a very fast and talented winger who always knows how to find space, she’s a good finisher as well. Billa is their key player though and if she ends up with the ball, it almost always ends up being very dangerous.

“She’s the most dangerous player you need to take care of, can work well solo, make use of crosses, and can anticipate situations great in general. There are many names to mention though: Tine De Caigny has proven her skills in Belgium plenty of times, defender Katharina Naschweng is someone who can easily take long-range shots, Fabienne Dongus is very experienced too. They are definitely not a team to take lightly.”

Milan usually plays in a 3-5-2. This year, there‘s talk of a switch to playing a 4-3-1-2 and against Zürich, the team played with five at the back. The team tends to have a lot of possession but it can be rather aimless at times. Milan also tends to press high and has trouble with teams that are fast on the counterattack. How do you think Hoffenheim can exploit this? And how do you think they can beat Milan?

“Hoffenheim is definitely a team who can make a lot out of counter-attacks, especially with players like Jule Brand, Nicole Billa, or even new signing Tine De Caigny who are fast and good with possession. Milan needs to be very aware of their surroundings and prevent them from having too much space, even though I would assume they wouldn’t go ahead with a 3 backline against a team like Hoffenheim.”

Hoffenheim once beat Bayern Munich by a score of 3-2. Do you think they can pull off a similar surprise against Milan?

“Absolutely. I think Hoffenheim’s biggest disadvantage is the short pre-season and that they didn’t have as much time together to prepare and get the mechanisms going. They lost quite a few key players in Lena Lattwein, Tabea Waßmuth or Maxi Rall. Compensating for that on the pitch will take some time either way.”

Germany has been producing a lot of talented players lately. However, the national team seems like it‘s coming off a decline and is currently in the process of rebuilding. Do you think Germany can become a global force in women‘s football again?

“I wouldn’t say it’s on the decline. It’s just trying to find and implement their new path, recovering from some bad years. Germany has a very good talent pool with lots of players who are already playing on a high level at a young age (Jule Brand, Paulina Krumbiegel from Hoffenheim for example, Lea Schüller, Klara Bühl, Lena Oberdorf, Lena Lattwein, Sophia Kleinherne, Max Rall, Nicole Anyomi, Laura Freigang, Sydney Lohmann, Sjoeke Nüsken, Stina Johannes, and I could keep going with names who haven’t even been nominated yet).

“The most important part for Coach Martina Voss-Tecklenburg will be to decide and set a fixed axis and then build the rest of the team around it. That way you have some consistency set but can always try out new things, integrate new players, or react to changes.”

“There’s no real answer to the first question because it shouldn’t be so hard. The league should be available for everyone, both nationally and internationally. Unfortunately, the DFB have been lazy in that regard for many years. I can only hope that the Magenta Sport deal and the fact that they will produce every league game from now on and show it live, will somehow push the whole thing in the right direction.”

Author’s Note: In a landmark deal, all of the Frauen-Bundesliga games will be available on Magenta Sport this season. However, the service is only available to those who live in Germany.

Finally, what’s your prediction for tomorrow?