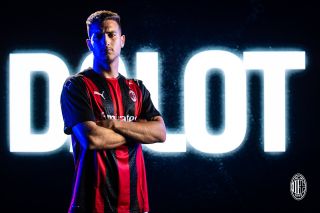 SM Exclusive: Man Utd insider gives insight on Dalot – “He has left us scratching our heads”

One of the summer signings that may go under the radar for most is the arrival of Diogo Dalot on loan from Manchester United.

The 21-year-old is an energetic and versatile option as he can play both right-back and left-back, proving some much needed cover to Stefano Pioli’s squad.

What is your reaction to the news that Dalot has joined Milan?

“Mostly positive considering I thought we could have used the funding from a potential sale to help finance a deal for Jadon Sancho but that hasn’t happened.

“He’s got potential but I don’t think Dalot has a future at United as things stand. He will need to seriously impress during his time in Milan.”

What kind of player can Milan fans expect in Dalot?

“Dalot likes to get forward and doesn’t get pushed off the ball easily. Expect lapses in concentration when he’s asked to defend.”

The deal is officially a dry loan but there is speculation in the Italian media that a permanent deal will be discussed, would he be a big loss for United and what kind of fee would you want?

“Dalot wouldn’t be a loss to Manchester United. The club paid £19m for him in 2018 so anything above that would be acceptable. If he has a good season I’m adding an extra £20m on top of that by the way!”

What are Dalot’s biggest strengths and weaknesses?

“His strengths would be pace and physicality. A weakness would be defending.

“Dalot’s crossing has been abysmal during his time at United, but I think a lot of that is down to us not having players who fight for the ball inside the opponent’s box. Milan have Zlatan Ibrahimovic so it will be interesting to see if he improves that part of his game.”

After Smalling’s move to Roma, Sanchez and Young’s moves to Inter and Pereira’s move to Lazio, why do you think Serie A clubs are coming after your fringe players?

“I’m guessing the experience some of those players have is a huge factor.

“As for Dalot, he’s got a lot of potential and has been unable to show it at United. He has left us scratching our heads and wondering why Jose Mourinho ranted and raved about signing him.”