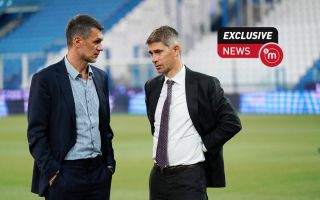 SM Exclusive: Romano on Milan’s summer budget and the main targets they have

The January transfer window hasn’t come to an end yet, but it seems Milan are satisfied with the three signings they have made. Therefore, they are now focusing on the summer instead, with several targets in mind.

Paolo Maldini and Ricky Massara will have some important decisions to make this summer, depending on the outcome of the season. In our podcast, we spoke to Fabrizio Romano about the budget and the positions Milan want to reinforce.

What would you say are Milan’s main targets for the summer and what kind of budget will we have? It surely depends on if we get Champions League and/or win the league…

“That’s it, that’s it, because it’s a matter of budget so it will depend on the Champions League and the Scudetto. I expect them to go for a striker, a right-winger, a left-back to be the deputy for Hernandez and let’s see the situation in the midfield.

“They are so happy with Bennacer and Kessie so I don’t expect anything big there, also because they want Tonali to grow up with the club and show his skills in the coming years. Let’s see, the most interesting part in my opinion is the centre-back.

“We’ll see if they will sign Tomori or send him back to Chelsea and go for a different centre-back. It’s an interesting player, he had a good match against Inter. He’s a different centre-back, fast, aggressive but €30m is too much. Milan will take a decision at the end of the season, Ricky Massara is in love with the player.”

READ MORE: Rebic eager to build on goal vs. Bologna after complicated period