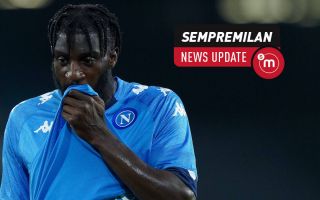 SM: Milan ‘are interested’ in Chelsea midfielder – Rossoneri are his ‘preferred destination’

AC Milan are interested in signing Tiemoue Bakayoko from Chelsea and the midfielder would welcome a return, we have been told.

There has been an abundance of speculation in recent weeks suggesting that Bakayoko – who has returned to west London after his loan at Napoli expired – could re-join Milan, where he was on loan during the 2018-19 season under Gennaro Gattuso.

We spoke to Chelsea insider Nizaar Kinsella of Goal.com to get the latest information on whether Bakayoko could indeed secure a return to the San Siro.

“Yes, Milan are interested in Bakayoko for sure and the asking price has come down since they last took him on loan. Bakayoko is in the last year of his contract and should be available for less than 20m euros. Milan seems to be his preferred destination at this stage. Nice have asked about him but he is less interested in that move.”

READ MORE: Talks over Kessie’s renewal set to be delayed due to Tokyo Olympics