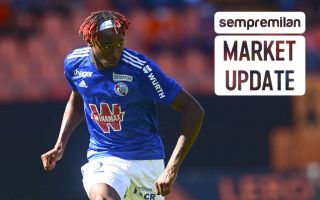 AC Milan are at work to find a final agreement with Strasbourg for Mohamed Simakan and close the deal, we have learned.

In the last few days there has been an attempt to from RB Leipzig to enter the race, with the Bundesliga side having identified the Frenchman as a possible future replacement for Dayot Upamecano, but there is nothing doing.

As Pietro Balzano Prota tells us, Milan have moved with greater decision, and contacts with the boy’s entourage continued even after the summer transfer window (when Milan tried to close the deal) and continue today.

Yesterday his entourage denied a “done deal” but let leaks out, which have continued even today. The player’s message on his Instagram story is enigmatic, a photo complete with Rossonere braids (for the most passionate about details) and a “loading” message.

The feelings are “positive”, and the “done deal” could come at any moment, also considering Milan’s willingness to make any new arrivals available to Pioli as soon as possible. The last steps are missing, the will and the hope of the player and his agent are that the right terms are found for his passage to the Rossoneri.