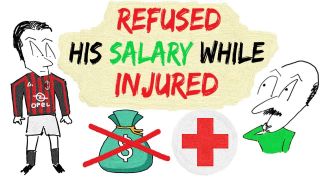 SMTV: The story of the AC Milan player who refused his salary when injured

In the year 2000, AC Milan completed the signing of Fernando Redondo from Real Madrid for a total of €18m. Despite what was a disappointing spell, the Argentine gained the respect of the fans.

The midfielder made just 33 appearances for the club in four years and eventually retired in 2004 due to injury issues. While injured, though, he refused salary and gained the admiration of the Rossoneri.

In our latest for SempreMilanTV, Mouwen takes an in-depth look at Redondo’s spell at Milan. Enjoy the video, and as always tell us your thoughts in the comment section below 👇

READ MORE: Milan dealt blow as ‘last way out’ fades for right-wing outcast – he could stay