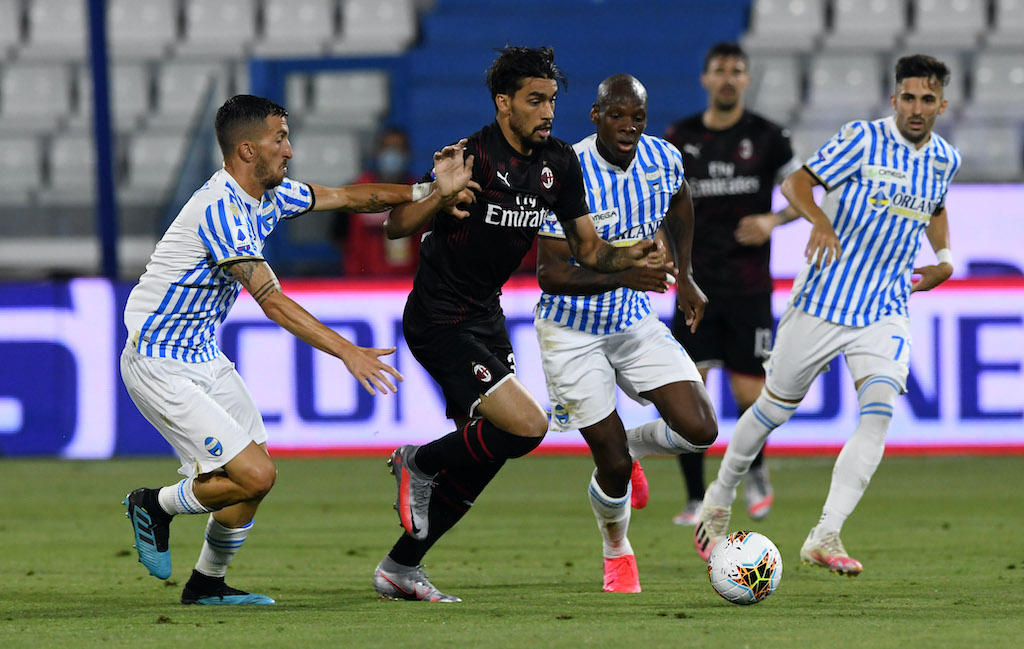 AC Milan played out a thrilling 2-2 draw against SPAL at the Stadio Paolo Mazza on Wednesday night, coming from two goals down.

Two of them came in the back four as Davide Calabria and Matteo Gabbia started in place of Andrea Conti and Simon Kjaer respectively, while Giacomo Bonaventura was rested in favour of Lucas Paqueta in behind Rebic.

The first half chance of the game fell to the Rossoneri inside the opening four minutes as Samu Castillejo fed Paqueta who darted towards goal before firing straight into the hands of Karlo Letica from 25 yards.

Milan continued to press high and camp inside their opponent’s half, with Castillejo coming closest three minutes later as he rolled an effort wide of the near right post after nice hold-up play by Rebic and Paqueta.

Rebic was barrelling towards the goal inside the 10th minute and given his red-hot form it looked certain to be 1-0, but the Croatian got the ball trapped under his feet inside the area just as he was about to shoot and SPAL cleared.

Despite having all the early play it was the home side who took the lead. A corner came into the box and was not well dealt with, allowing Bryan Dabo to square to former Milan Primavera player Mattia Valoti, who bundled the ball home from the six-yard line.

Letica was called into action again inside 17 minutes as Hakan Calhanoglu found space inside the box to shoot; the SPAL keeper doing well to palm the ball away as it looked destined to curl inside the far post.

The substitute Saelemaekers made a brisk impact and weaved space to try and draw Milan level in the 24th minute, but his shot was deflected just wide. From the resulting corner Paqueta glanced his header into the side netting at the near post when he should have done better.

The Belgian was again involved when Calhanoglu stood a ball up to the back post, however he cleared the bar comfortably with a first time volley.

Just before the half hour mark though it was 2-0, and it was an incredible goal from the veteran striker Sergio Floccari. The ball sat up nicely for him around 30 yards out, and he hit it perfectly with dip and curve past a back-peddling Donnarumma and into the back of the net.

SPAL then decided to sit back as expected and Milan began to turn the screw again. Paqueta tested Letica with a stringing near post drive and Rebic should have done better moments later when he rolled an effort wide from inside the box.

Milan thought they had a route back into the game when Calhanoglu bundled in a pull-back from Rebic, but just as the game was about to kick off again the goal was called back by VAR for offside in the build-up.

The Rossoneri were thrown a lifeline a few minutes before the break as Marco D’Alessandro was shown a straight red card for a tackle over the top of the ball on Theo Hernandez, again after VAR consulation.

From the resulting free-kick Calhanoglu came agonisingly close, striking the woodwork with a fierce drive from distance.

The probing continued with Theo Hernandez fizzing an effort over the bar from distance, but after the red card it became clear that the home side were going to camp in and make life difficult.

The final action of the first half saw Davide Calabria strike a volley incredibly sweetly at the far post in an almost Van Basten esque way, but his effort bent narrowly wide of the far post.

Pioli made a somewhat surprise change at half-time as Rafael Leao came on for Calabria in a clear statement of intent, with Saelemaekers moving to right-back.

There were also two changes for the hosts as Missiroli and Fares came on for the goalscorers Valoti and Floccari.

Paqueta drew a fantastic sprawling save from Letica with his powerful effort from just outside the box, and from the resulting corner Bennacer’s crossed curled past everyone and narrowly wide of the far post.

SPAL were happy to play on the break and arguably should have done better when the space opened up for Petagna in the 53rd minute, but he fired well over.

Paqueta was the man who continued to fire at will and he twice let fly from just outside the box – the first time drawing an easy save, the second time seeing his attempt deflected wide.

Milan drew incredibly close to halving the deficit moments later as a deep cross found Saelemaekers who headed back across goal but saw his effort cleared off the line.

The Rossoneri continued to be wasteful with the few clear chances they were creating, with Rebic becoming the latest to fire over in the 63rd minute after Leao was forced to check back his run while seemingly in behind.

Pioli’s next roll of the dice came not long after as Diego Laxalt and Zlatan Ibrahimovic came on for Theo and Rebic.

Ibrahimovic’s first opportunity came just before the final 20 minutes when Saelemaekers picked him out with an excellent cross, yet the Swede could not get over the ball and his header was wayward.

The final change came wheb Bennacer made way for Giacomo Bonaventura, and second later Paqueta fired over with a volley after a neat header back from Ibrahimovic.

SPAL continued to have all the good fortune as Calhanoglu saw an effort deflected and, with the keeper wrong-footed, the ball rolled agonisingly wide of the post.

With just over 10 minutes to go Milan finally got the goal they had been trying so hard for. A cross from the left was deflected to Rafael Leao, who finished with calm and composure to make it a one-goal game.

The away side continued to press for a leveller, and came close when Ibrahimovic’s free-kick from 25 yards was deflected just wide for a 14th Rossoneri corner.

Just as it looked like Milan would return from Ferrara empty-handed, they equalised in the dying seconds as a ball from Saelemaekers was diverted into his own net as Vicari attempted a shanked clearance.

That would be the last kick of the game, as Pioli’s men were forced to settle for a point.