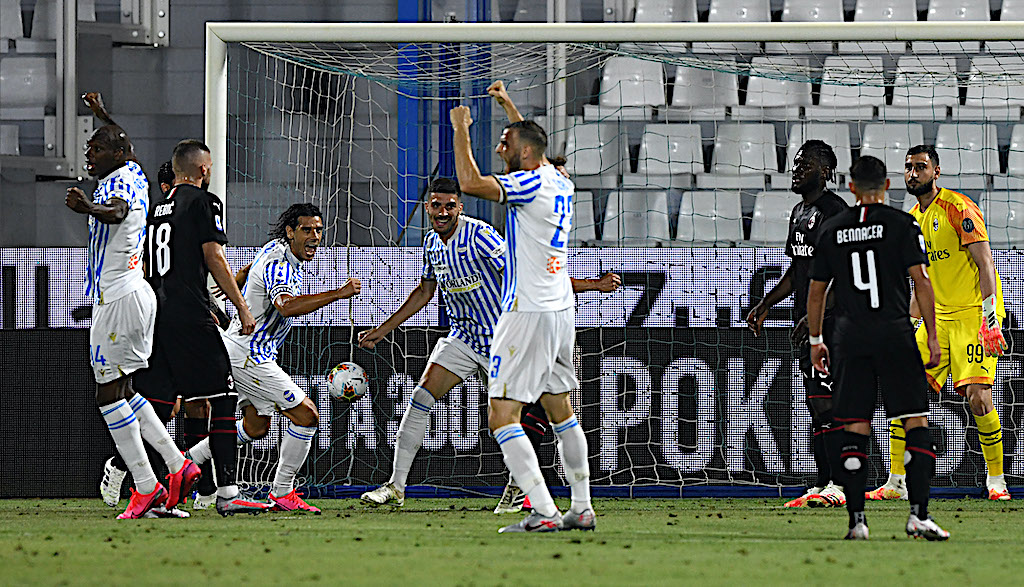 AC Milan faced SPAL in a midweek game that seemed very winnable, especially after the Rossoneri managed to beat Roma 2-0 over the weekend.

Unfortunately, the game began on a bad note for Milan as they were trailing after only fifteen minutes. To make things even worse, Donnarumma was caught out by a brilliant long range effort just after the half hour mark to make it 2-0 to the hosts.

Pioli’s men pressed high trying to get themselves back in the game and even scored a goal which was ruled due to offside. Towards the end of the first have Marco D’Alessandro was awarded a red card which made the home side sit back and defend their lead.

While the number of shots was growing, Milan failed to get a goal back until 80 minutes when Rafael Leao got one back with a neat finish. With a man up and ten minutes to go the Rossoneri were trying their best to turn the game around but it just wasn’t their night.

However, with a large amount of luck in the 90th minute an own goal from SPAL gave Milan a point, but ultimately the result was a big blow for Pioli as he probably expected an easier game and all three points.

Lucas Paqueta finally got his chance from the start and finally he managed to justify the trust of Pioli. He was arguably the man of the match, and while we already seen what he can do with the ball at his feet it is the consistency that needs to come in order for him to try and maintain a starting spot and potentially be involved in Milan’s future project.

Paqueta managed an 88% pass success rate with three chances created and four successful dribbles. He also made a few nice interceptions and tackles helping his team recover the ball.

The one thing the Brazilian lacked though was decision making towards the end of the game which may be due to the fact that he wants to prove his worth and was a bit too eager to make the difference.

The a very positive performance from Paqueta though, who needs to build on this and continue on improving until the end of the season.

Milan conceded the first goal of the game through a corner kick in which Matteo Gabbia failed to clear the ball twice. The uncertainty of the young defender caused his team a lot of issue last night, but it also justifies all the rumours that suggest Milan are looking for a centre-back to partner up with Alessio Romagnoli.

Gabbia got his chance from the start but failed to impress as he has done. The 20-year-old seems not ready to be a permanent part of the starting XI, sending a signal to the Milan management for the upcoming transfer window.

It is important not to ignore the youngster’s abilities though as he has shown his qualities, but he may need some time on loan to gain experience and grow into a more mature defender.

A big problem for Milan was their struggles to convert chances and shots into goals. With thirty-nine shots in total, Milan only managed one goal as their second one was an own goal.

That is a worrying statistic and even though it can happen from time to time, it is not the first time we see the Rossoneri being unable to convert and generally wasteful.

#ACMilan had 39 shots against SPAL, their highest tally in a single Serie A game since November 2013 against Genoa (also 39).

Even Zlatan Ibrahimovic didn’t help his teammates after coming on the pitch and the majority of shots on target were at the keeper or deflected as the shot was into a crowd.

Pioli must work on that, as the team are starting to create lots of chances and look more and more dangerous with every game, but they are still failing to bring that efficiency into action.

Franck Kessie was looking to build on his previous positive displays and he did not disappoint against SPAL. His energy and strength helped Milan a lot in recovering the ball and moving into attacking phase.

Kessie had an exceptional 95% pass success rate combined with three key passes and three aerial duels won. While his team-mates up front failed to convert, the former Atalanta man was doing exactly what was expected from him.

It now provokes the dilemma of whether or not Milan actually need a partner for Ismael Bennacer or if in fact they already have a solution within the current squad. Time will give us an answer, but Kessie is slowly proving a point and he may win the fans and management over if he continues his former against Lazio and Juventus.

Ante Rebic was uncharacteristically poor against SPAL, and it was Rafael Leao that took the spotlight in the second half. The Portuguese had a positive impact managing a goal to his name and looking more like himself in general.

After scoring against Lecce this makes it a second goal for him in the last three games and we may see him from the start on the weekend depending on Castillejo’s condition.

The youngster is one of many players in this current Milan squad that has a point to prove and fight for his future, therefore it will be intriguing to follow him until the end of season and see if he can find some momentum.