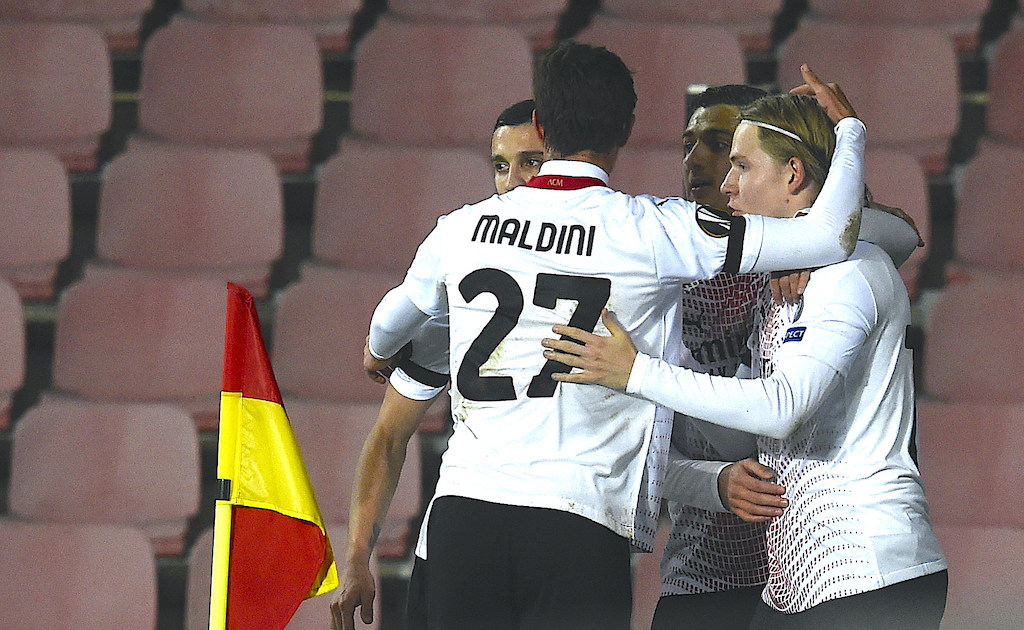 Tatarusanu, Conti, Kalulu, Duarte, Maldini and Lorenzo Colombo where given some playing time after barely having any in the weeks prior. Dalot, Tonali, Hauge, Krunic and Castillejo formed the rest of starting XI.

It was a slow game to begin with, unsurprisingly, with so many players playing their first minutes of the season. Despite the absentees, the team still looked solid and managed to create chances throughout the game, but poor decision making denied them a bigger advantage.

The only goal of the game was scored by a brilliant solo run from Hauge as the Norwegian yet again impressed when given the chance to do so. Fortunately for his team, the goal was enough to give Milan the first place in the group.

It was the Norwegian’s night yet again as he was the biggest threat to Sparta, finishing one of his solo runs in a brilliant way opening the scoresheet.

The youngster is growing game after game and is beginning to knock on Pioli’s door asking for a starting XI place. Great business by Maldini to act fast and bring him to the San Siro.

❄️ Ice in his veins.

He now has three goals in his last four games for Milan, with some very smart finishes against Celtic (twice), Napoli and now against our Czech opponents. There is quite simply nobody in the squad in better form.

2. Growing with every game

Another player mentioned a lot is Sandro Tonali. The Italian is finally given some more game time on a consistent basis and is showing his talent.

Tonali has exceptional vision for the game and his passes are getting better with every game as he finds rhythm and becomes more and more familiar with playing in a double pivot, having operated at the base of a midfield three for Brescia.

📈 Growing with every start.

Pierre Kalulu got his first minutes for Milan in an official game and did not disappoint. While he usually fits better in the right-back position, Kalulu was used as a centre-back this time around to partner up with Duarte, a role he has played in the UEFA Youth League.

The youngster – despite not being the biggest in terms of height – managed to deal with everything that came his way and seemed confident on the ball. Satisfying signs by the former Lyon man as he can only grow from here on.

Diogo Dalot has been given game time in the Europa League and hasn’t failed to impress. This time around against Sparta he played on the left and not in his usual position on the right, but that didn’t seem to bother him too much.

He showed great work rate and he was solid at the back making no mistakes, but he was also effective going forward even racking up an assist for Hauge’s goal.

If the Manchester United loanee continues like this, the management should try and make his stay permanent, because having a full-back who can cover both sides is an absolute luxury.

5. A tough and tiresome night

Both Lorenzo Colombo and Daniel Maldini were given a chance from the start against Sparta Prague, but they didn’t exactly shine under the lights of the Stadion Letna.

Colombo in particular had a tough game as he was struggling on the ball and overthinking situations too much. The youngster seemed to be afraid at times to make a shot or be more selfish and he need to work more on that as we’ve seen what he’s capable of.

Maldini on the other hand wasn’t disappointing, but didn’t really impress either. The youngster had a decent game, showing his skilful footwork from time to time. He tried making a few solo runs which were successful until the point someone outmuscles him.

What looks to be his biggest problem at the moment is that he is too weak. Similar to Gabbia a few year ago, Maldini needs to get into a better physical shape, but he does have the time to do so as he is only 19 years of age.