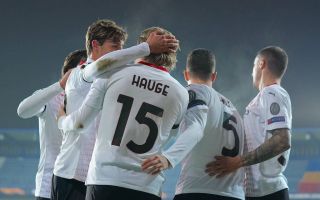 AC Milan managed to steal top spot in their Europa League group as they beat Sparta Praha 1-0 in Prague and received a favour from Celtic.

In the end it would be a first half solo goal from Jens Petter Hauge that was the difference as he continued his fantastic recent form, making it three goals in his last four games.

The game was otherwise played with high intensity and got a bit feisty at certain points, though the evening was rounded off perfectly when news filtered through that Celtic had beaten Lille meaning Milan top their group.

That means that the Rossoneri should in theory get a kinder draw in the Round of 32, but they also net an extra €500k from finishing top as opposed to second, making it a good night all round.

Head coach Stefano Pioli made 10 changes to his starting XI from the win over Sampdoria, with Tatarusanu, Conti, Duarte, Kalulu, Dalot, Krunic, Hauge, Daniel Maldini, Castillejo and Colombo all starting.

The Rossoneri were the first to threaten as Tonali slid a ball through to Conti, and Colombo should have had a shot near the penalty spot but he dummied the ball to nobody and it was subsequently cleared.

Heca was forced into the first save 60 seconds later when a cross from Castillejo on the right wing found its way to Dalot at the far stick, who took a touch and settled himself before shooting and forcing the Sparta keeper into a reaction save at his near post.

Tatarusanu was then called into action in the seventh minute when a corner was clear but the ball came back in over the top and found an unmarked Polidar who looked offside, though thankfully he rushed his effort and hooked it straight into the arms of the Romanian.

Five minutes later Castillejo thought he was in behind having made a smart incisive run from the right wing, though the linesman flagged him offside before the play could conclude and it appeared to be a harsh call.

With their fate also sealed prior to the game Sparta chose to rotate and they selected two 17-year-olds in their line-up. They had a good spell on top after Milan’s initial dominance, penning an inexperienced back four in with dangerous aerial balls.

It seemed that the main source of Milan’s danger was going to come from getting the ball to the wingers in space, and that’s exactly how the opener arrived. Hauge picked up the ball on the left and darted inside before opening his body and sidefooting it inside the far post. It was deja vu of the goal against Celtic at San Siro in many ways.

🔥 HAUGE'S ON FIRE, YOUR DEFENCE IS TERRIFIEDpic.twitter.com/zzwZuP6CTy

Right on the half hour mark Colombo had a golden chance to make it 2-0 to the visiting side as he was found unmarked around 10 yards out by an out-swinging corner, but his header was weak and wide, and he was frustrated with himself for it.

The game then descended into niggling challenges and there was certainly no love lost between the two sides; Polidar going into the book after a late challenge on Conti that was absolutely unnecessary.

The first incident of the second half was yet another flashpoint as Daniel Maldini was adjudged to have gone through the back of Polidar and he went into the book, with tensions flaring between the players and the Sparta players surrounding the referee.

Hauge tried a repeat of his first half effort what he dipped his shoulder and shifted the ball onto his right foot, though this time his effort didn’t have the power or the placement to trouble the goalkeeper.

The home side had a big chance to level in the 57th minute and Milan had Tatarusanu to thank for preserving the lead. The ball found its way to the far side of the box through a crowd of bodies and Krejci had time and space to shoot unmarked, but by the time he had settled and fired his effort, Tatarusanu had covered his near post well.

Moments later it could have been 2-0 for Milan when a Hauge-led break ended with Castillejo cutting in onto his left foot and sending a tame shot at Heca that he gathered at the second attempt, though Maldini had made an overlapping run.

Substitute Karlsson tried his best to make inroads into the Milan defence when he cut onto his right foot and crossed from the right side, though it ended up narrowly evading two back post runners.

Rafael Leao came on immediately after, with Pioli using him up front as Colombo made way.

Just under 15 minutes from time, Sparta were reduced to 10 men and it appeared to be a very harsh decision from the referee Siebert. Leao led Milan on a counter-attack with options either side and Plechaty chopped him down, though he was shown a straight red even though defenders were rushing back and the foul was on the half way line.

Daniel Maldini made way after the sending off, with Franck Kessie perhaps surprisingly given the last 15 minutes or so.

Despite their numerical inferiority, Sparta had the next two half-chances as Krejci shot wide from distance in space and not long later Julis slashed an effort wide of the near post from inside the box.

Hauge had a big chance to clinch the game as the Diavolo piled bodies forward on the counter in search of a killer second goal, though he sent a very timid effort at Heca when found alone on the left side of the box.

The final change came as the exhausted Hauge was replaced by Brahim Diaz as the clock struck 90.

Tatarusanu was solid all night and he was called upon to make a fantastic low save down to his right to deny Karlsson, who had somehow got through on goal with a simple long ball.

Job done for Milan: four wins from six, just one defeat and top spot in the group.