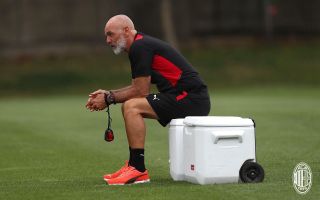 After a number of forgettable seasons on the bounce it was quite unexpected when the well-travelled manager Stefano Pioli was able to drag AC Milan to a second-place finish in the Serie A standings, bettering the likes of Atalanta and Juventus in the process.

With Pioli entrusted to lead the team through the 21/22 league campaign, as well as a welcome return to the Champions League, we take a look at the challenges that face this team, many of whose players were seen by many as overachievers last term. Can they all kick on, or will Pioli be unceremoniously sacked as he was at Inter?

It is hard to judge how AC Milan will deal with the rigours of not only competing domestically but in the Champions League as well.

Building a squad big enough to deal with fixture congestion

Fixture congestion and all the injuries and suspensions that come along with it is a growing headache for managers all around Europe.

Milan’s squad will be tested to the max in this regard next season as they attempt to compete on two major fronts, at home and abroad in the Champions League. One of the issues they may have is that it is obvious that older players will suffer more from fixture congestion having a negative effect on their bodies. This could be a major issue for Milan, especially when you consider that their strike force will consist of a soon-to-be 40-year-old Zlatan Ibrahimović and an almost 35-year-old Olivier Giroud.

Milan has a long history of getting the most from veteran players, but this could be a stretch too far.

Desperate for a proven goal scorer in their prime

The point about ageing strikers leads nicely onto this section and whether AC Milan really have the fire-power to seriously challenge the likes of their cross-city rivals, and Juventus.

They relied heavily on midfielders such as Franck Kessie and Ante Rebic chipping in with impressive goal tallies last term, as Zlatan topped the Rossoneri’s scoring charts with a measly 15 league goals. Giroud has hardly been prolific during his stop-start career at Stamford Bridge, and it remains to be seen if the French star has much left in the tank.

So far this summer Milan have spent the rest of their transfer kitty on strengthening their midfield and defence. Could this come back to bite them?

The San Siro expects big things from their Milan team this season, but it remains to be seen if there is enough talent in the squad to deliver.

Closing the gap on a rampant Inter

While most of the challenges that face Milan in the upcoming season are daunting, there are others that come with something of a silver lining.

Of course, their biggest challenge will be overhauling Inter at the top of the Italian topflight, in order win Milan’s first league title since 2010-11. This will be no easy task with the Nerazzurri still boasting top players like Romelu Lukaku.

However, the silver lining previously mentioned comes in the form of many key players having left Inter after Antonio Conte surprisingly stepped down to be replaced by Simone Inzaghi. This means they will be without Achraf Hakimi, Ashley Young, and of course the incapacitated Christian Eriksen.

This could leave the door open for AC to wrest the Serie A title to the red half of Milan. With rumours that Nicolo Barella could also be on his way out of Inter, suddenly their squad looks particularly patchy.

Much of Milan’s success last season was down to their ability to keep clean sheets. Italian Euro 2020 hero Gianluigi Donnarumma was instrumental in bringing that about, but he has joined the mass exodus of stars running towards the PSG cash cow.

His replacement is Mike Maignan, who proved his worth in Lille’s incredible run to the Ligue 1 title last season. There is no doubt he is a capable keeper, but can he fill Donnarumma’s boots?