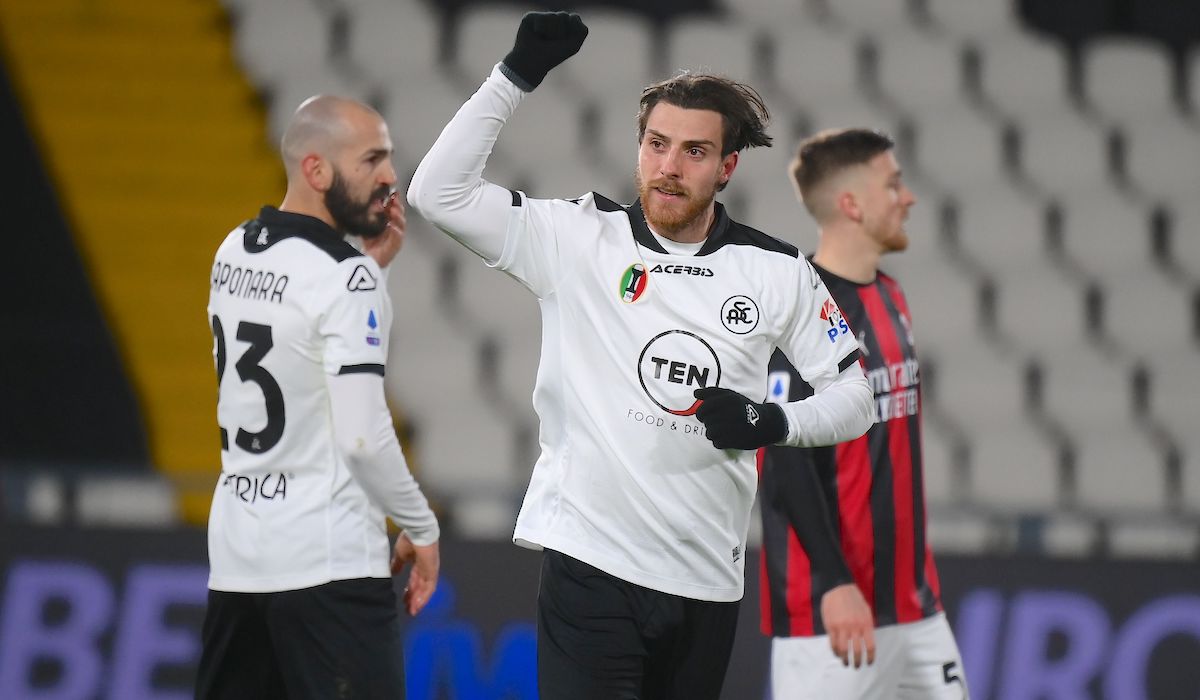 AC Milan fell to their first away league defeat of the season as they were soundly beaten 2-0 by Spezia on Saturday night.

Much like the Atalanta game at San Siro, the Rossoneri were outpressed and outfought in all departments by their hosts, who got both goals in the second half having been the better team in the first too.

The opener came from the captain Maggiore as he was on hand to tuck a ricochet into an empty net, and the second came via a rocket from Bastoni that had Donnarumma beaten.

The result means that Milan failed to take advantage of Juve’s defeat to Napoli, and Inter can claim top spot back with a win over Lazio tomorrow night.

The main team news was that Simon Kjaer, Ismael Bennacer and Hakan Calhanoglu all returned to the starting XI after their respective absences, while Ante Rebic was a late exclusion due to a knee problem sustained in training on Friday.

The hosts had the first half chance of the game in the opening few minutes as a free-kick from the right side reminded that Rossoneri about the threat they pose from set pieces, but Gyasi could not keep his header down.

Agudelo led the line for Spezia in the absence of their top scorer Nzola, and he will have been kicking himself that he didn’t get a shot off having walked through the box, but he couldn’t benefit from Romagnoli’s slip and was eventually crowded out.

Gianluigi Donnarumma was called into action moments later when the former Milan man Saponara picked up a loose ball after a corner was cleared to the edge of the box, but the No.99 responded well to the fierce rising shot to parry it over.

Milan actually struggled to assert any dominance in the game in the early stages and their first real opportunity didn’t come until the 26th minute when a free-kick from the right corner of the box was headed narrowly wide of the far post by Kjaer.

Pioli’s side showed their threat when a sweeping counter saw the ball move quickly from Theo Hernandez in the left-back position, through Ibrahimovic to the right wing and eventually seeing Leao have a cross cut out. From the resulting corner Romagnoli should have done better than heading wide at the near post.

Spezia almost hit Milan on the counter and beat them at their own game as Agudelo rolled a ball into the path of Maggiore, with Romagnoli blocking heroically.

The hosts started the second half with the same intensity, and Dalot was required to make a fantastic stand-up block to deny a shot from Saponara that was goal-bound.

Milan’s first real opportunity of the second half came when Ibrahimovic was brought down about 20 yards out, yet Calhanoglu – as many other players had – slipped over and hit the wall.

Kjaer was required to intervene and block as the ball was dangerously fired towards the far post as the Ligurians continued to pen the Diavolo in.

The home side took a deserved lead in the 56th minute through Maggiore. Agudelo won the ball back from Theo and drove into the box, cutting it back for the onrushing man, and a miscommunication between Romagnoli and Donnarumma see the ball spilled into the bath of the Spezia captain who simply had to slot into an empty net.

Three changes followed just after the hour mark as Soualiho Meite, Fikayo Tomori and Mario Mandzukic all came on in place of Bennacer, Kjaer and Leao respectively.

There was a moment of controversy when Saponara went down right on the edge of the box with the Spezia players pleading for a penalty, but they will have perhaps been glad it wasn’t given as Bastoni doubled the lead. The free-kick was rolled short to the edge of the box and the left-back thumped his effort in off the far post.

The truth is that Milan never really threatened to get back into the game despite the late introduction of Jens Petter Hauge, as they limped to their first defeat away from San Siro since December 2019.

Mandzukic headed wide in the closing stages, with Spezia hit the bar with a 25-yard wonderstrike in the final action of the game before play was finally brought to a conclusion.