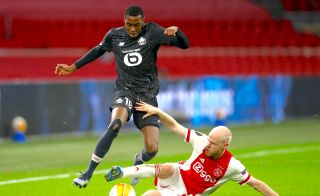 AC Milan are keeping an eye on Lille winger Isaac Lihadji and could launch a move if they sell a player first, according to one journalist.

Lihadji is regarded as one of Lille’s next rising stars, having joined them last year from Marseille where he came through the youth ranks where he had been since he was 12 years of age. He is yet to score for Les Dogues but has 3 assists in 26 appearances across all competitions with 461 minutes of action across that time, showing most were outings off the bench.

According to the latest from Sportitalia journalist Rudy Galetti, Milan are ‘closely monitoring’ Lihadji as they look for potential reinforcements for the right wing.

The teenager class is considered an option for the right side in case Samu Castillejo leaves in the January transfer window, amid rumours he is attracting interest from Spain.

READ MORE: Red Bull Salzburg striker dreams of playing for Milan like his father did