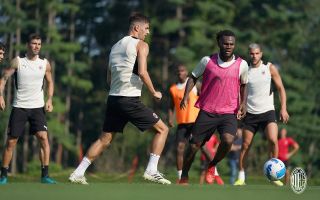 Sportitalia: Spurs closing in on €10m-a-year deal with Milan star including ‘monster’ fees

Rumours that AC Milan midfielder Franck Kessie is heading towards a move for Tottenham are beginning to gather steam, with an agreement reportedly close.

Earlier today Spurs made the announcement that they have appointed Antonio Conte as their Head Coach on a contract until the summer of 2023, with an option to extend it. Given Conte’s knowledge and experience in Serie A, there is already plenty of speculation that he is going to raid some Italian clubs.

According to the latest from Rudy Galetti of Sportitalia on Twitter, Kessie’s agent George Atangana and Tottenham director Fabio Paratici are close to reaching an agreement over a contract that would begin in July 2022.

The Ivorian would earn €10m net per season in salary and there would be ‘monster’ fees for the agent involved too. Kessie’s contract with Milan of course expires at the end of the season and there are no signs that a renewal is imminent.