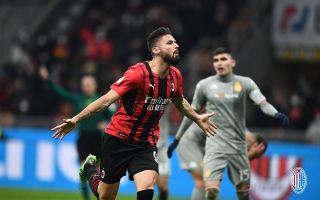 San Siro king Giroud and a 13-year run: All the key stats from Milan’s win over Genoa

AC Milan were pushed to extra-time by Genoa at San Siro in the Coppa Italia last 16 on Thursday night before eventually prevailing 3-1.

A lethargic and largely underwhelming first half performance proved problematic for Milan, with Genoa taking a deserved 1-0 lead into half-time following a header from debutant Leo Ostigard, but Giroud levelled after 74 minutes before Leao and Alexis Saelemaekers scored in extra-time to secure progression.

The win sees Milan into the quarter-finals of the Coppa Italia where they will face either Lazio or Udinese, and below are the most interesting statistics to come from the match via the official website…

➤ Milan have reached the Coppa Italia quarter-finals for the 13th consecutive season.

➤ Rafael Leão has been involved in four goals in three games in 2022: two goals (both as a substitute) and two assists.

➤ All of Olivier Giroud’s six goals in all competitions this season have come in home games.