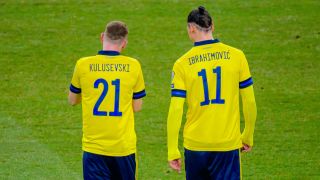 Sweden coach Andersson gives update on Ibrahimovic’s condition: “He is not that advanced in recovery”

Sweden head coach Janne Andersson has revealed that he spoke to Zlatan Ibrahimovic about his recovery from a knee injury, and found out he is not far along in his recovery.

Ibrahimovic damaged his knee when Milan triumphed over Juventus last month, which sparked fears as to whether he could be set for another long spell away from the game. However, it looks as though he has avoided serious injury, and while he did not play for the Rossoneri again in 2020-21, he will also miss out on the Euros.

Sweden have a bit of a crisis on their hands as Dejan Kulusevski and Mattias Svanberg have both tested positive for Covid and are therefore away from the squad at the moment. Speaking at a press conference, the coach of the Swedish national team spoke about the conditions of Zlatan Ibrahimovic. Andersson, in fact, revealed that he had heard him by phone after the forfeits of Kulusevski and Svanberg. These are his statements:

Andersson spoke at a press conference ahead of the start of the European Championships and was asked about Ibrahimovic’s current condition, revealing that he has spoken to the veteran striker.

“I have had contact with Zlatan. He is not that advanced in recovery, as we had understood from the beginning. Of course I did an extra check to see how his rehabilitation is going,” he said (via MilanNews).

“We did not expect to be able to summon him, but I checked to be sure. He’s not that advanced in the rehabilitation development. I would have spoken to him regardless of these forfeits but of course I took the opportunity to check when this situation arose.”