AC Milan made it back-to-back wins and consecutive clean sheets in Serie A as they beat Salernitana at San Siro on Saturday afternoon.

Franck Kessie got the first goal inside the opening five minutes, tucking away a feed from Rafael Leao after an excellent run from the winger, then the second came courtesy of Alexis Saelemaekers as the Belgian got on the scoresheet for the first time this season, cutting in from the right and finishing into the far corner.

We must preface this tactical analysis by saying that Salernitana – as their league position and 12 defeats from 16 games suggests – were a very poor opponent who offered virtually zero threat and played right into Milan’s hands in many ways, yet were actually quite lucky that the Rossoneri were incredibly wasteful.

One of the main facets of Milan’s approach to their game was to try and cause confusion through the rotating of forwards. As we have begun to see against teams who play the low block (or are expected too), Kessie (2) took up an advanced position as the home side looked to always have four players ahead of the ball carrier at any one time.

In the sequence below, the presence of Theo Hernandez (1) is important as he pins the full-back thus creating some space for Leao to attack. Pietro Pellegri (3) plays a key role too as he acknowledges the man on him and uses that later in the play, while Brahim Diaz (4) drops in to potentially facilitate some link-up play. 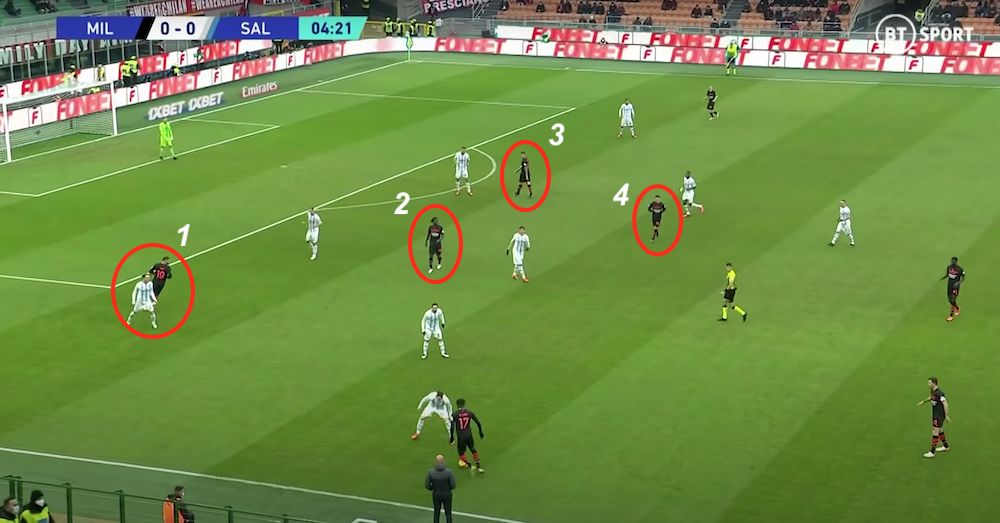 As mentioned, Pellegri (circled left) has wisely continued his run to cause the defender to drop in, which allows Kessie to take up a position in space. Leao certainly didn’t look directly at the Ivorian when cutting the ball-back, suggesting once again that it is very much a routine to centre the ball into an area just in front of the penalty spot. 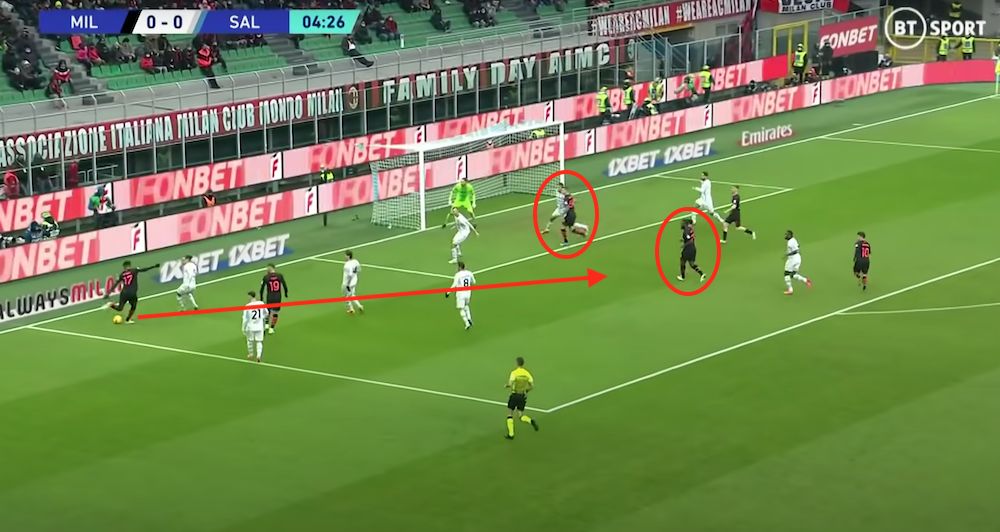 As mentioned above, Salernitana were pretty much the ideal opponent for Milan to play when factoring in their weaknesses and the strengths of Pioli’s side. They were incredibly lacklustre and sloppy in possession, often giving the ball away, which encouraged Milan to press high and facilitated opportunities through giveaways in dangerous areas.

It should have been 2-0 in the 13th minute when Bakayoko (circled in red) pushed up the field and seized possession, and what is striking is how the Diavolo are clearly banking on Salernitana not being able to pass through the press nor to switch play, thus being happy to cede huge areas of space and even have players like Kessie not even tracking a man.

Brahim Diaz missed a couple of huge chances on the day and should have netted here as Bakayoko drove forward and curled the ball to the Spaniard at the back post, who slid in and hit the side netting. Quick, direct and effective. 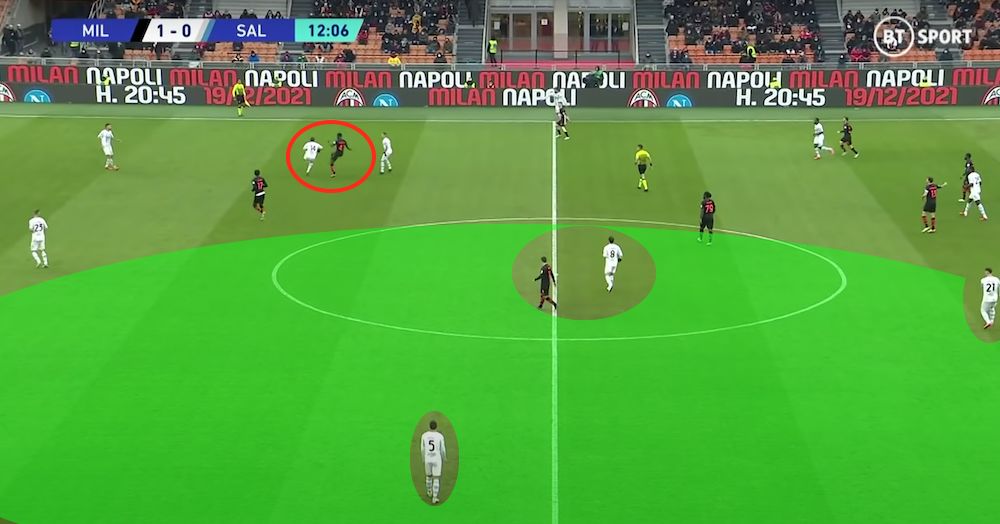 The second goal again comes from some shuffling in positions. Kessie has moved out wide to the left as Leao picks up possession, and for as smart as Brahim (far left) is to occupy the space he does in a passing lane, Salernitana’s strange diamond essentially sets the trap for themselves.

The movement of the other players is key too. Rade Krunic is the man furthest left and this is where we first see his interesting role as almost a false nine (he came on for the injured Pellegri), while Theo Hernandez makes a parallel run to drag the defence over and create space.

The goalscorer Saelemaekers acknowledges the two Salernitana players being preoccupied by Brahim in possession and gets ready for a run into the space behind. 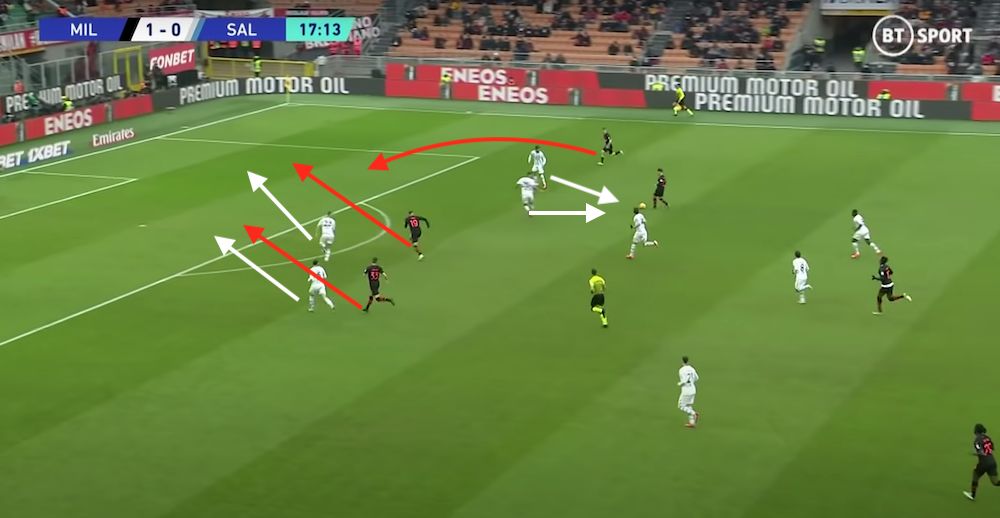 With Krunic and Theo pinning their men, Brahim Diaz makes a dart towards goal and we are convinced Saelemaekers only had one thing on his mind: to shoot on goal. To do that effectively, he is looking for the space highlighted in green. 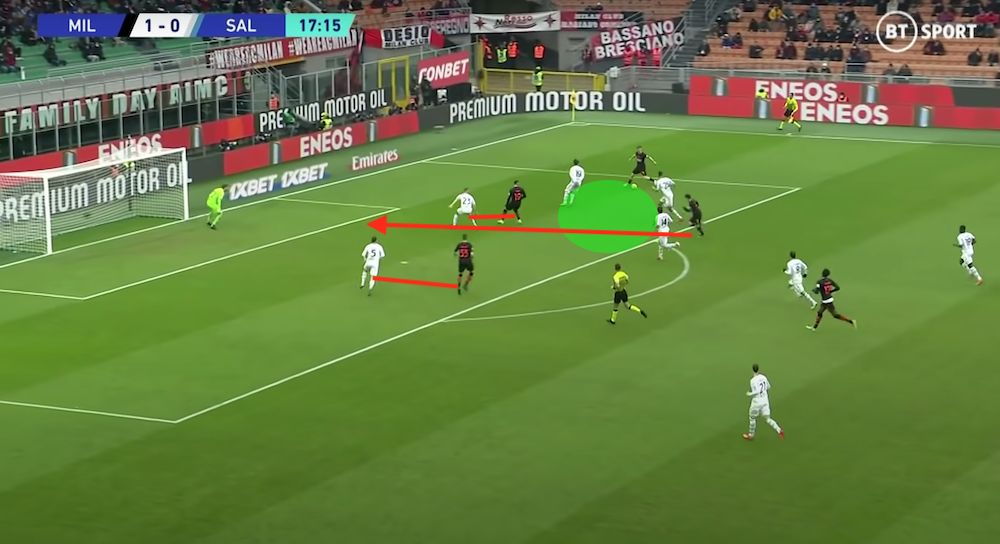 By the frame shown below, Salernitana’s defence has collapsed in on itself and there are four men stood between Saelemaekers and the goalkeeper, which means the Belgian knows a shot on target towards the far corner is likely to be a goal. 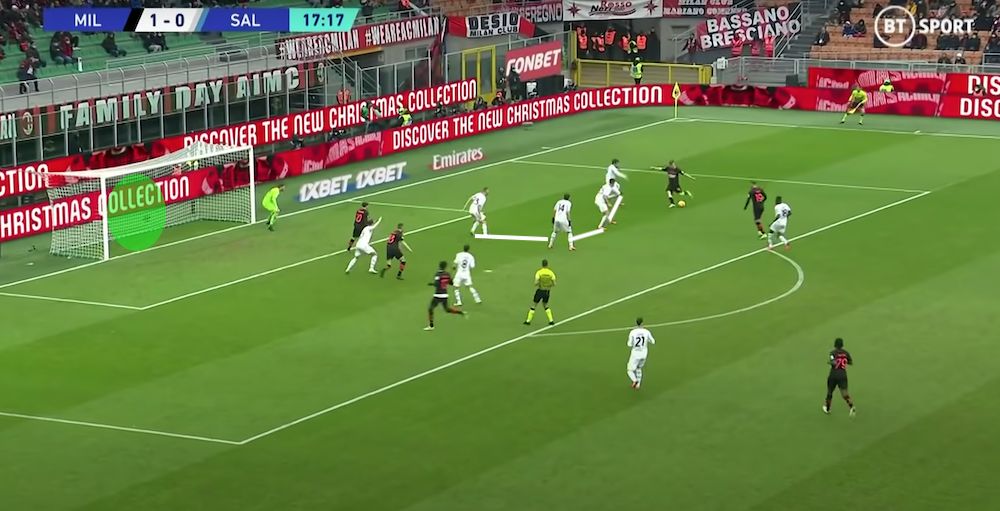 With the game at 2-0 and their visitors offering zero threat at the other end, Milan smelt blood. In the image below it can again be seen how the forward players interchanged, with Leao on the left as normal but Brahim Diaz taking up the false nine role, Kessie (in possession) behind and Krunic on the right. 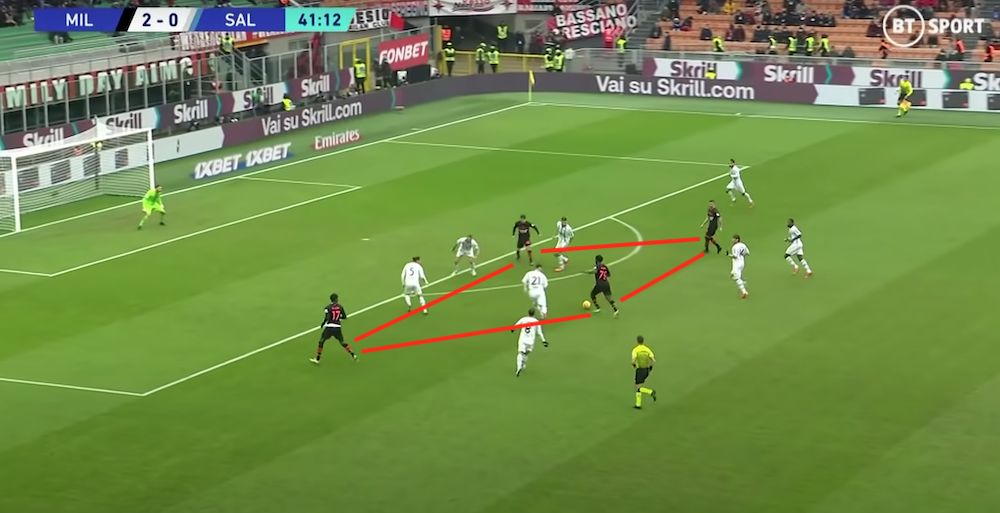 Milan will probably not have an easier game at home all season no matter what the scoreline suggests. They created chance after chance and could have had double figures, with Messias coming on and looking lively.

We have been impressed with the movement and instinct of the Brazilian, and he again sensed the chance here. Krunic is furthest forward and is circled to the right, with Brahim Diaz able to sit between the lines again, and no attempt made to stop the supply to the No.10 who is able to turn into a huge amount of space. Defensively, the Granata were all over the place. 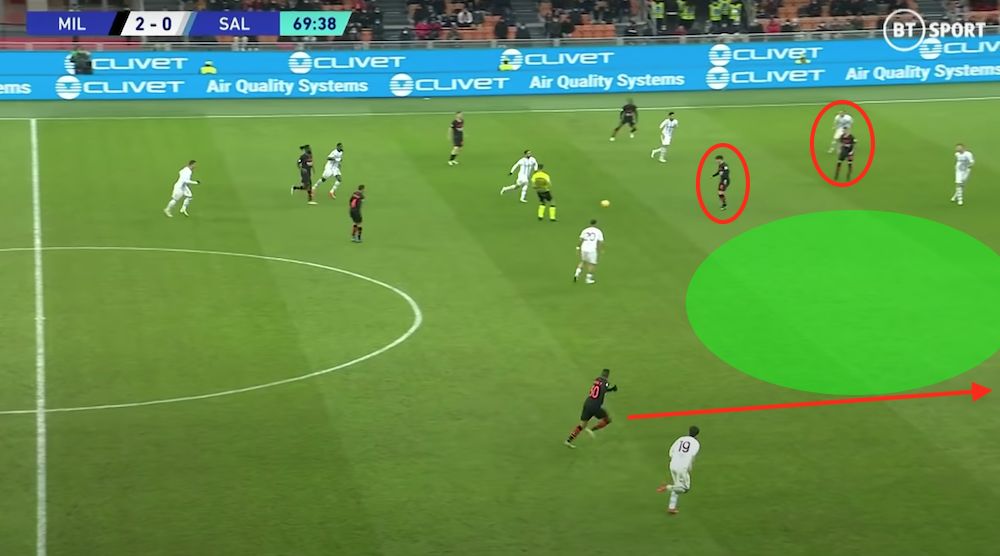 The main way to describe Brahim’s performance would be bright but wasteful; he did everything right until the final shot or pass and sadly this ball was just a bit behind Messias who didn’t hit his shot in stride, though it was a good save. 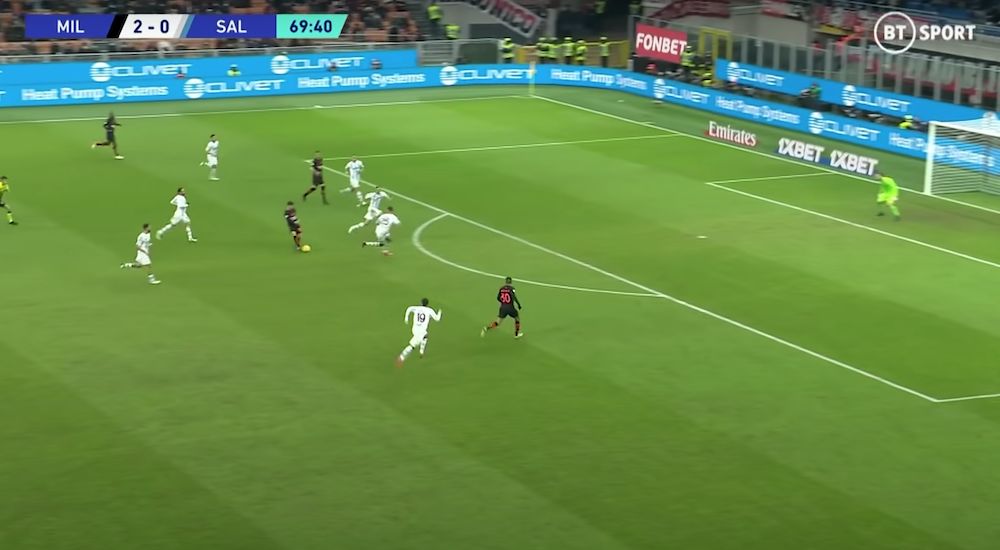 The press continued right into the final quarter of the game which showed just how committed and how fresh Milan looked. In the sequence below three man are pressuring the ball carrier and cutting the options available to the man in possession – left-back Pawel Jaroszynski.

The pass he ends up playing isn’t great, but the anticipation and enthusiasm of Saelemaekers 79 minutes into the game is what creates the biggest chance to make it 3-0. He nips possession and rolls it to Brahim Diaz, who somehow missed. 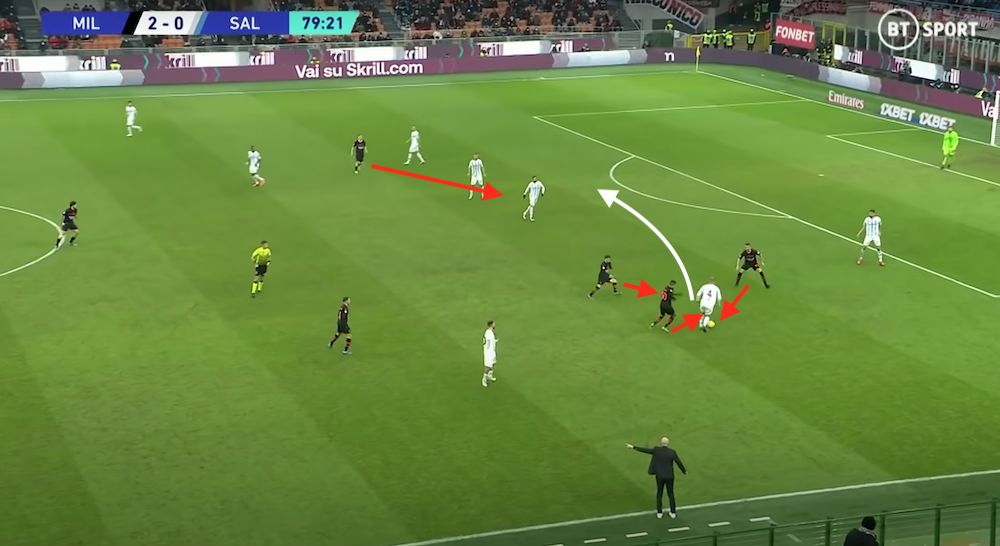 There was just one small moment that was unsatisfactory and it came right at the end with Romagnoli and Maignan failing to communicate properly and both going for the same cross. It ended up dropping to the Salernitana man who fired off target but it really could have cost a clean sheet and some chemistry and command is certainly needed moving forward. 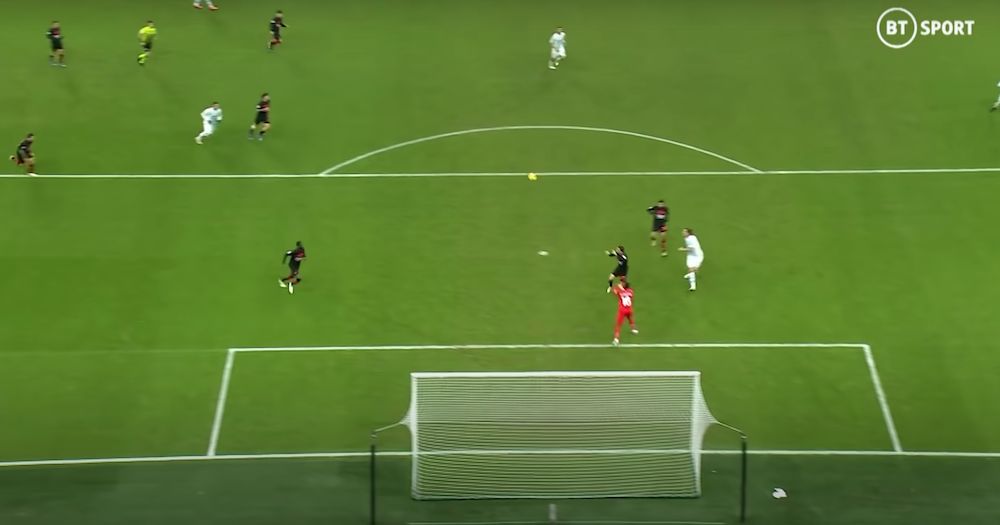 ➤ As alluded to above, Salernitana seemed out of their depth. Disorganised pressing with no real structure made them very easy to play through.

➤ One of the approaches they tried was to overload Milan’s wings which gave space through the centre when they inevitably lost possession either due to the press or due to poor passing, which helped Brahim Diaz a lot in transition.

➤ The right-sided centre-back in Salernitana’s three-man defence – Frederic Veseli – was targeted in a lot of two-on-one situations. He is not particularly slow but is perhaps lacking in positional awareness, though it must be noted Milan have constantly tried to overload down the left with Theo and Leao already this season.

Starting with the average position of the players, it can be seen that the Rossoneri kept their 4-2-3-1 system while Pellegri (No.64) was on the field with Kessie appearing more advanced in the pivot due to his surges forward. When Pellegri went off, Krunic became the man furthest forward and it is here we see the impression of a front four as mentioned above.

Salernitana’s approach on the other hand was clearly to try and play narrow and have a difficult two banks of players to get through. They didn’t achieve this as quick ball movement and the interchanging of players caused too much confusion. 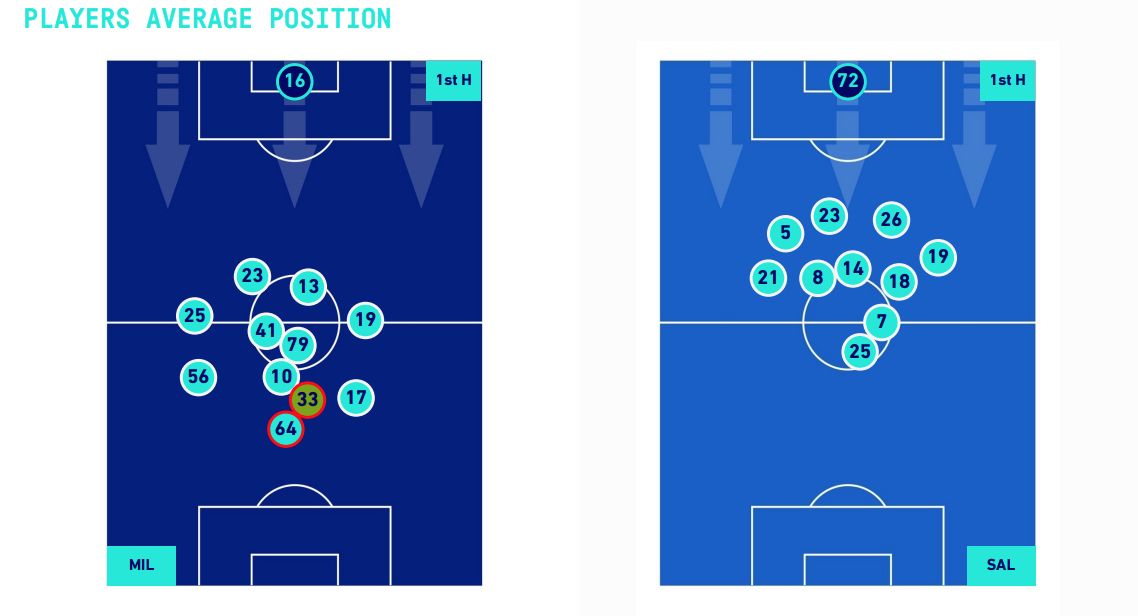 The heat map shows a good overall trend of the game: Milan able to have a lot of the ball in and around the edge of the visiting side’s 18-yard box and controlling the midfield around the half way line, while Salernitana had virtually no presence in Milan’s half. 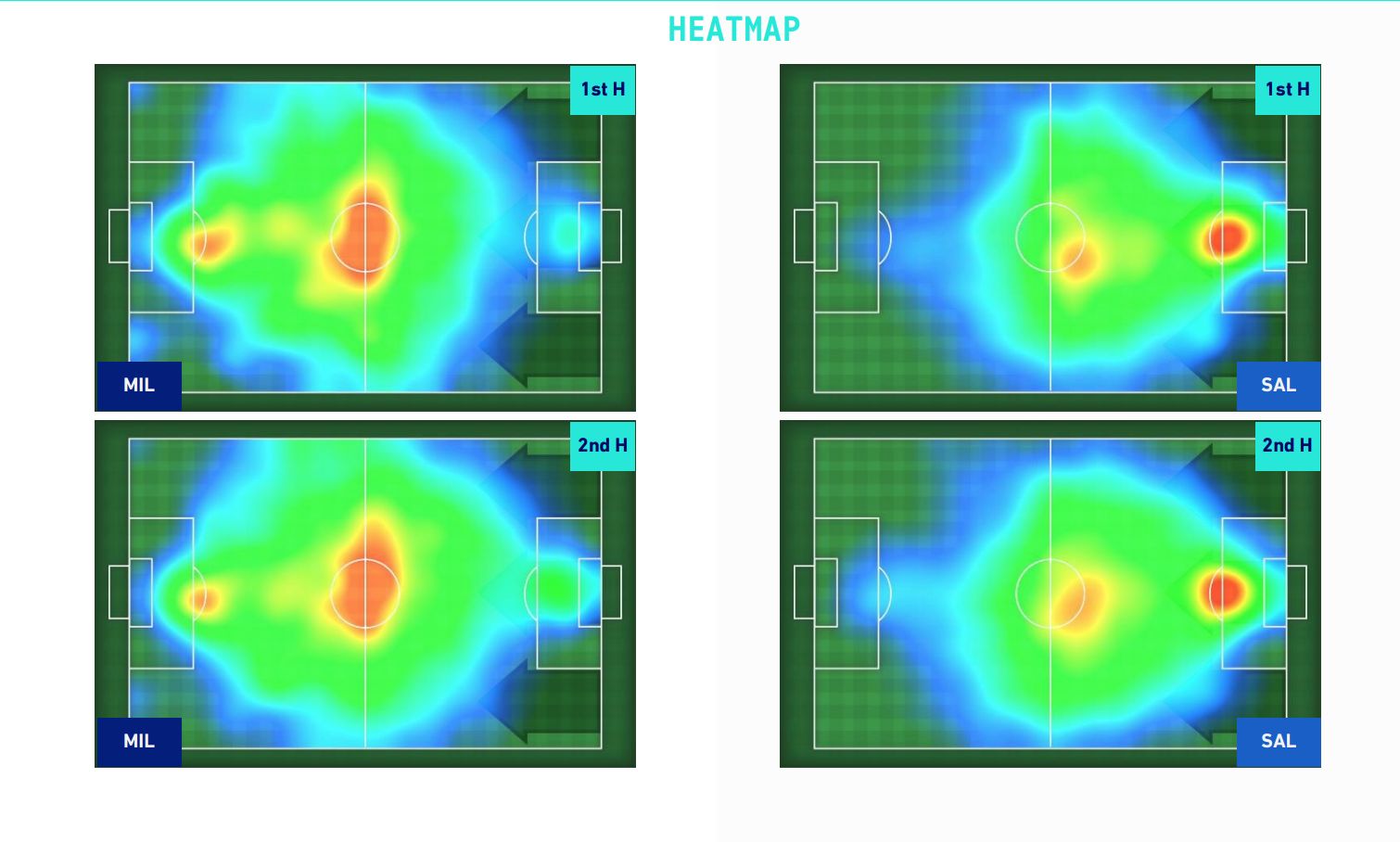 The amount that Milan pushed up in the first half to press the Campanian side is seen in the height of their average line, which was at almost 58m and was therefore in the opposition’s half. They also played with quite a low average width showing the willingness to overpower down the middle. 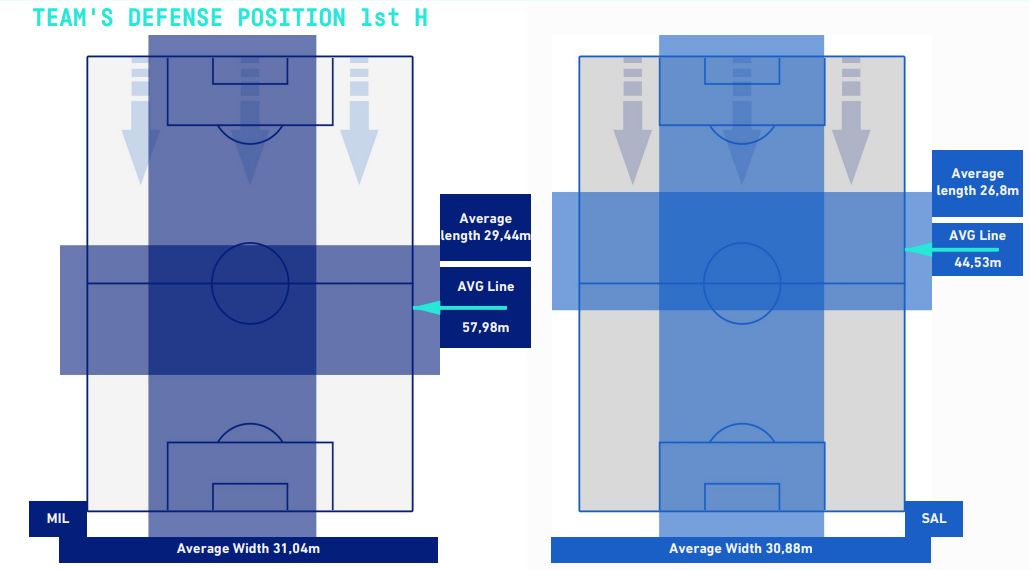 Finally, the touch map best displays the domination. Milan had 192 touches in Salernitana’s third compared to 71 for the away team in Milan’s, with over twice the amount of touches in midfield too, and 38 touches in their 18-yard box compared to 8. 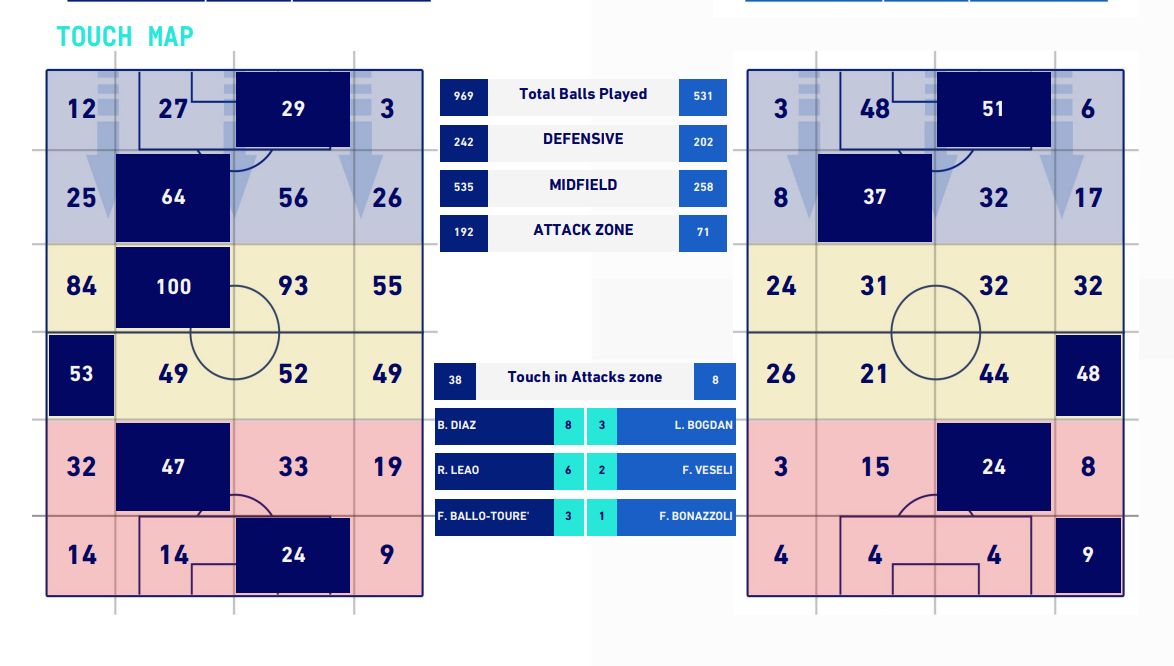 Milan will rarely come up against an opposition that lets them impose their strengths as much, so we cannot take too much from a game where it could have been a cricket score in truth. However, it was a useful reminder that the Rossoneri are capable of navigating potential banana skins with relative ease and was also a good exercise in being able to manage energy levels ahead of tougher games to come.