Wide overloads and the role of Messias: Tactical analysis of Milan’s win over Genoa

AC Milan put an end to their three-match winless run as they beat Genoa comprehensively on Wednesday night at the Marassi by a scoreline of 3-0.

Zlatan Ibrahimovic scored his second free-kick of the season in the first half to give the Rossoneri the ideal start and Junior Messias scored a goal each side of the interval to make it a comfortable night overall, taking advantage of Napoli’s slip-up against Sassuolo.

That said, Milan beat a Genoa side that are now winless in 12 games, have an injury crisis to battle and have not yet scored a goal in Andriy Shevchenko’s three-game tenure. Below is our tactical analysis of the game…

After the 4-3 defeat against Fiorentina last weekend and the 3-1 loss against Sassuolo on Sunday, Milan matched something they have not done for over 23 years as Pioli’s men conceded 7 goals or more in two consecutive league games for the first time since March 1998, when they lost 3-0 against Inter and 4-1 against Juventus.

There was only one antidote to the defensive problems and that was a clean sheet against Genoa. We saw inside the opening minute that the Rossoneri were quick to collapse into a narrow shape with the home side attempting to overwhelm down the middle with their 3-5-2.

It was an early indication that Milan were happy to frustrate Shevchenko’s side – who did not have a single player on the pitch with over one league goal this season – by containing and blocking. 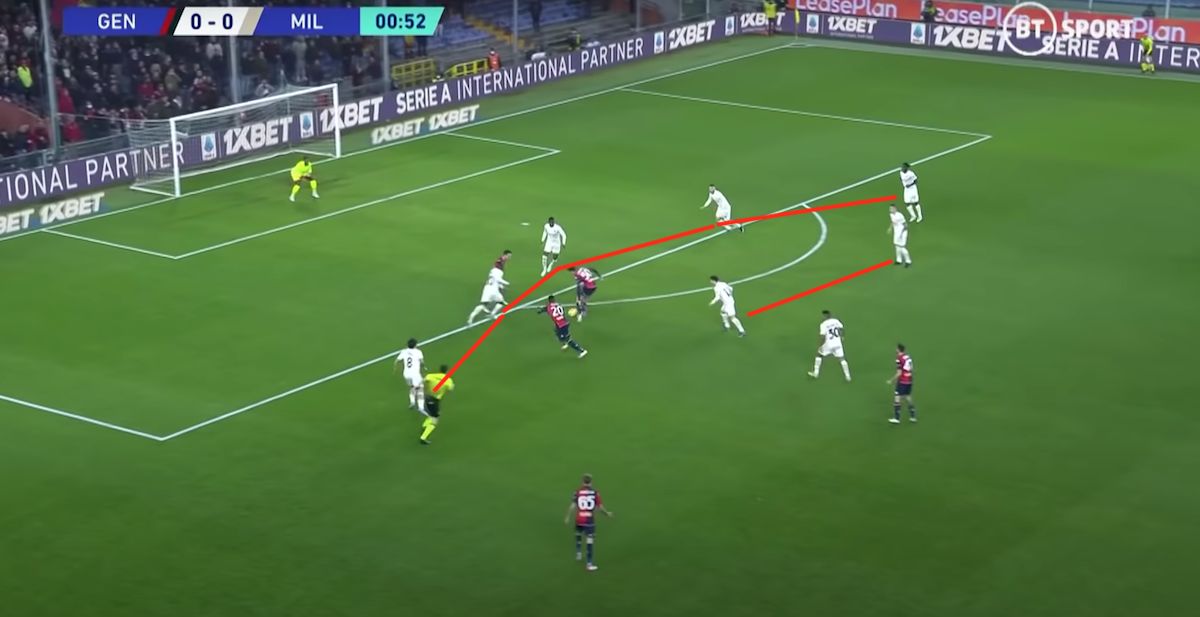 Forgive us for turning into SempreGenoa for a second, but we have to ask what Sirigu – a veteran goalkeeper – is thinking as this free-kick his lined up. With the ball 25 yards out, he does not over commit to either side and places his wall centrally.

How does Ibrahimovic score his set pieces? With power over placement. What this set-up did is tell Ibra that if he got the ball around the wall he was very likely to score. It seemed far more obvious to cover the left side of goal (from Sirigu’s point of view) and shift the wall to his right, so he is on the side the ball was almost certain to be struck at. 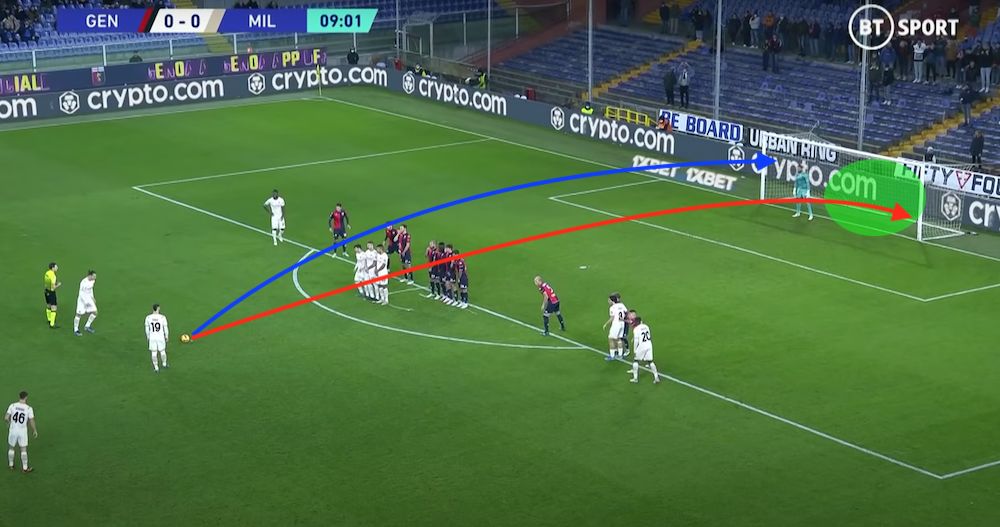 One observation that could be made several times between Milan taking the lead and Messias doubling the advantage was how many players got forward. In the sequence below, the Rossoneri get between the lines and have a string of five to push at Genoa’s defence, which consisted of a flat four but the 35-year-old Masiello acting as a sweeper. 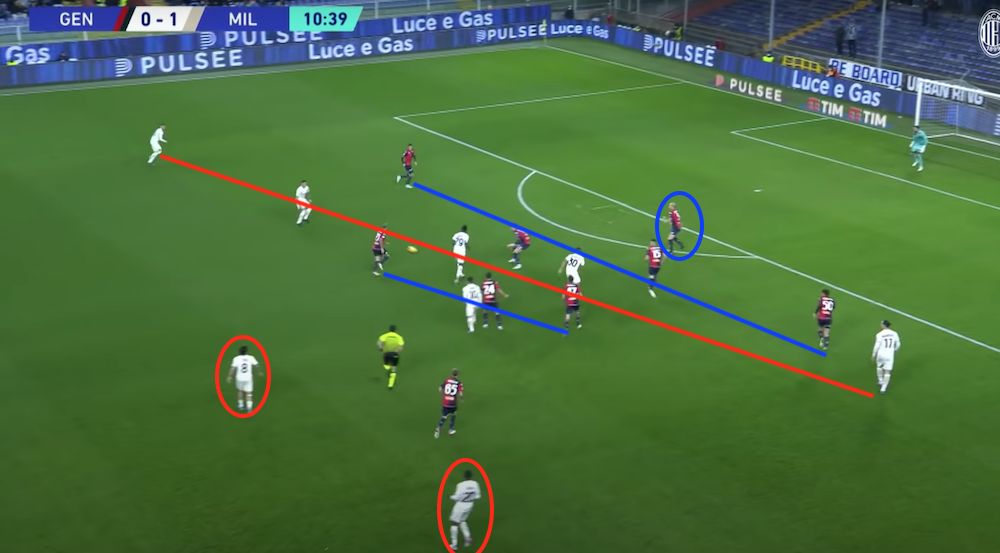 Shevchenko has some work to do on organisation, as Genoa dropped a bit too deep as a line of four thus opening up several passing options for Theo, and Ibrahimovic should have made it 2-0. 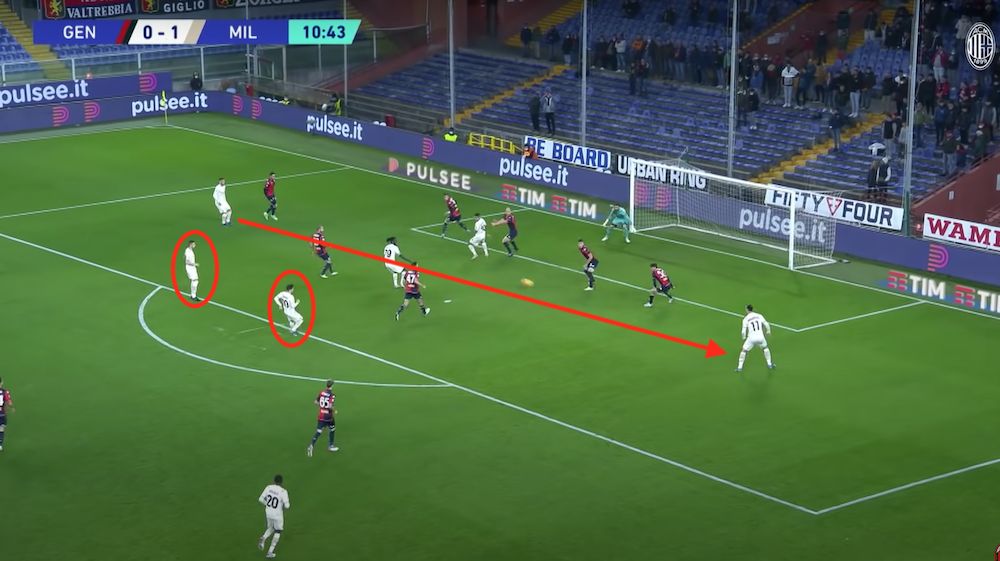 Shevchenko realised the danger his side were under so seemed to instruct his side to deploy more of a man-marking approach, particularly in the moments when Milan were trying to break out.

What this did however is allow the visiting side to cleverly exploit the space by allowing Ibrahimovic to drift to the flanks and try seize possession, knowing Brahim Diaz would be ready to run directly down the middle to bring the team forward 40-50 yards at a time. 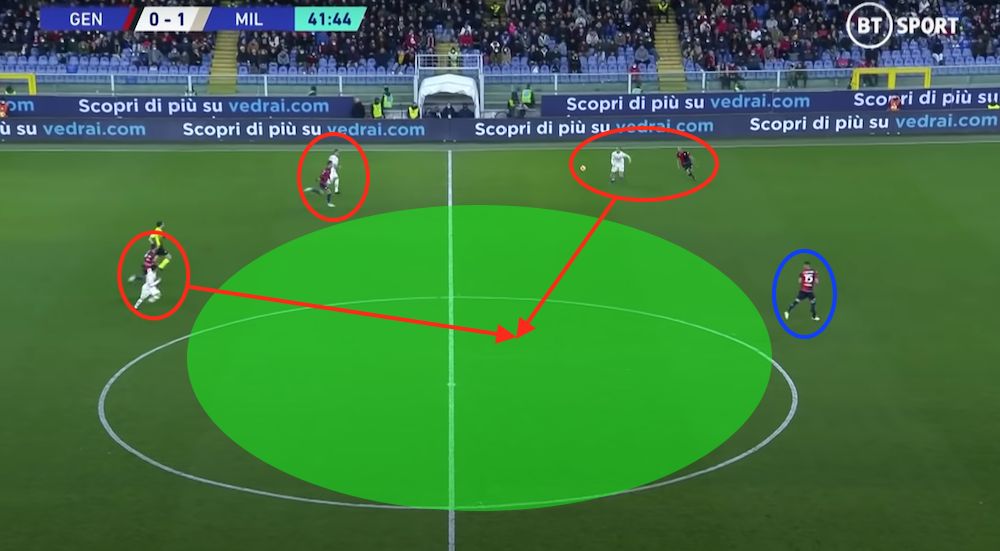 Genoa’s issue in this particular chance was that they almost half-hearted their attempts to stop Brahim. There was no threat from the onrushing Milan forwards, but the four Rossoblu defenders succeeded only in presenting the Spaniard with an obvious space to attack with the dribble, which is of course his main asset.

They got away with it thanks to the shot being drilled narrowly over, though it serves as another example of how Milan can switch it up and play direct but in a clever way. 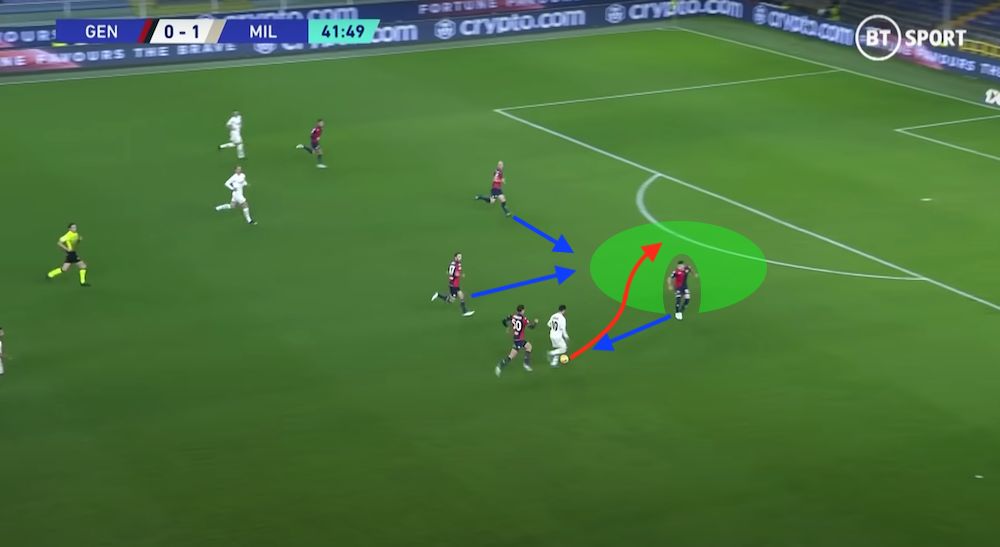 One of the running themes of Milan under Pioli from a tactical point of view is the tendency to embrace the wide overload. The move for the second goal starts with the Rossoneri committing four bodies down the right, almost hugging the touchline and creating passing lanes.

This sucks Genoa over and creates two spare men near the edge of the box, with some ball watching being done as well for good measure. 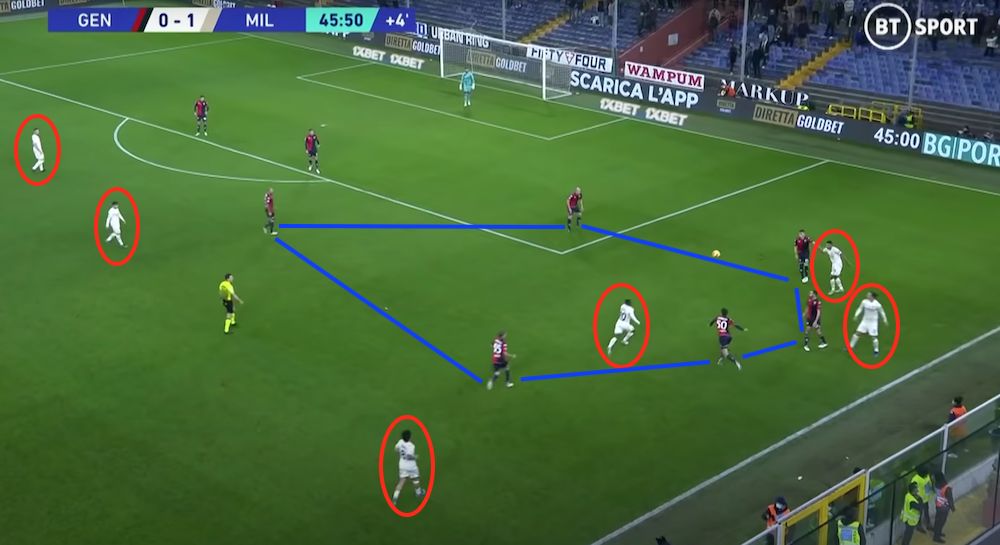 When the ball does eventually come to Brahim Diaz, it is close to an example of a quick switch because Milan have created a moment of disorganisation. A ball out wide to Theo was on again, but he chose to feed Krunic. Messias is circled as this is the first instance of a pattern that develops whereby he is the spare man out on the right. 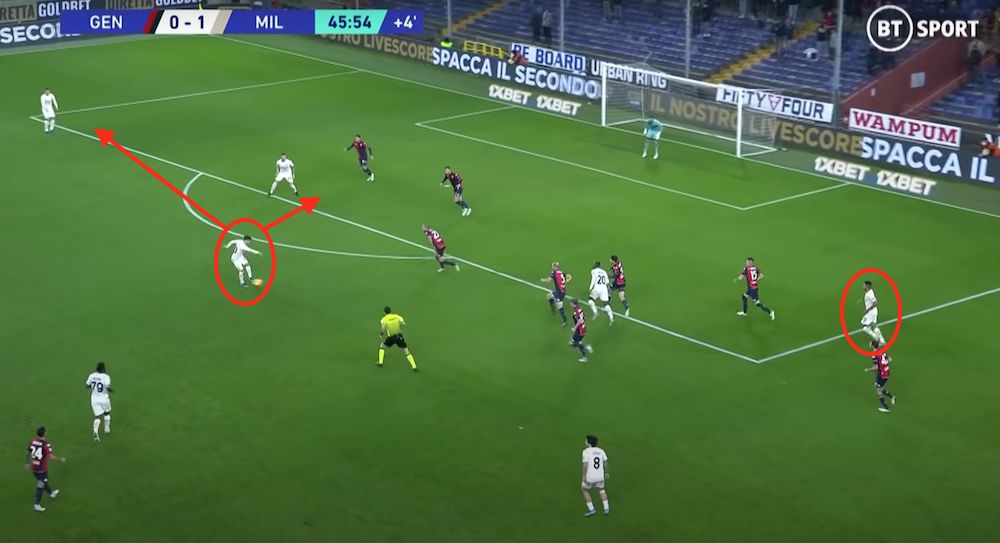 Krunic sees his spinning snapshot blocked, and the anticipation of Messias is excellent. He had positioned himself to attack not only a block but a rebound or a deflection, showing all of his goalscoring prowess to net a second header in three games. 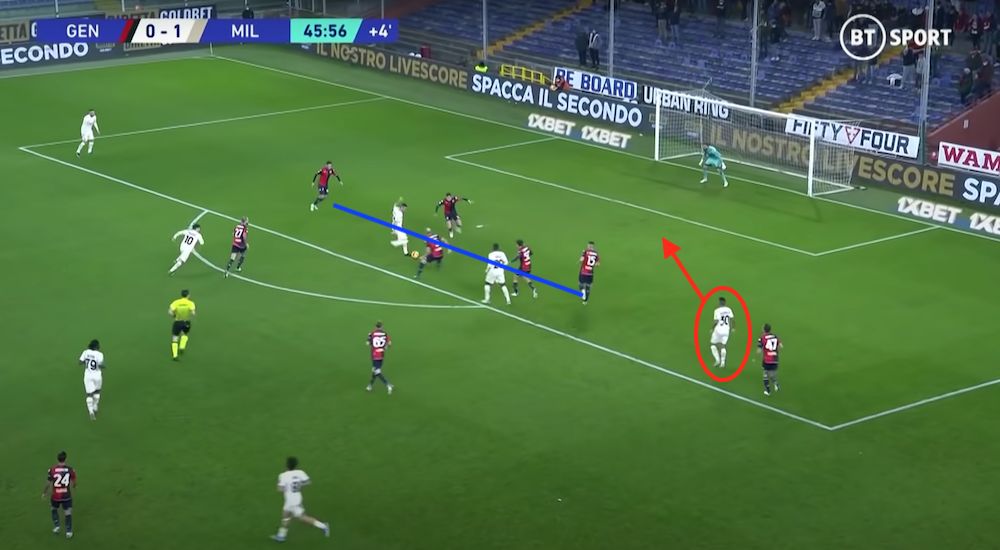 Milan have had a really tough time defending set pieces recently. It hasn’t always resulted in a goal (though did against Sassuolo), yet Pioli appeared to change approach and tell his side to take up two flat lines for free-kicks that were obvious crosses.

This can be seen from the lack of man-marking in the still below, where it becomes very obvious that there might be a problem in between the two banks if the ball was put into the right area. 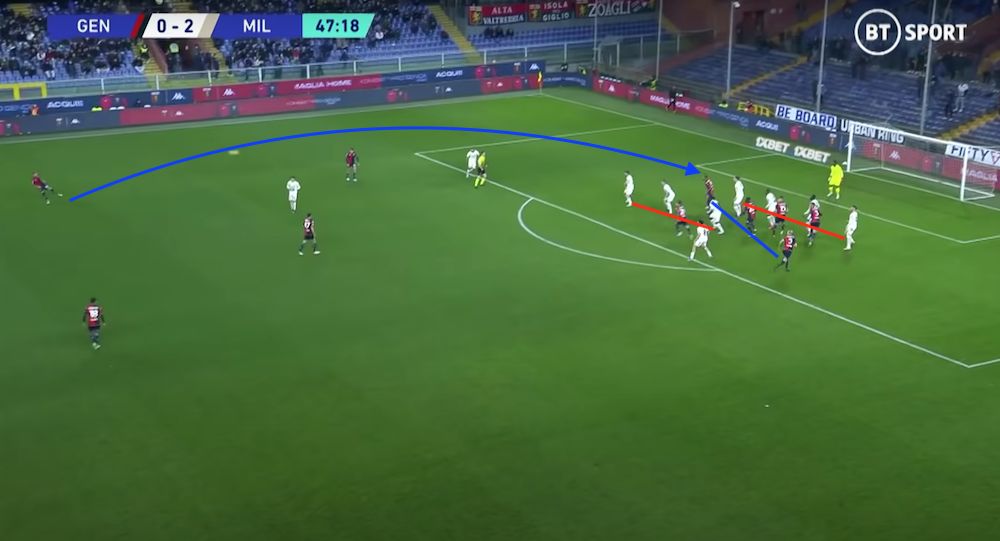 Sure enough, the delivery landed pretty much on the penalty spot where two Genoa players were waiting to flick a header on goal, and only Mike Maignan’s long reach prevented a goal that would have given the hosts renewed vigour. What must be credited is how Tomori reacted to the second ball, clearing acrobatically. 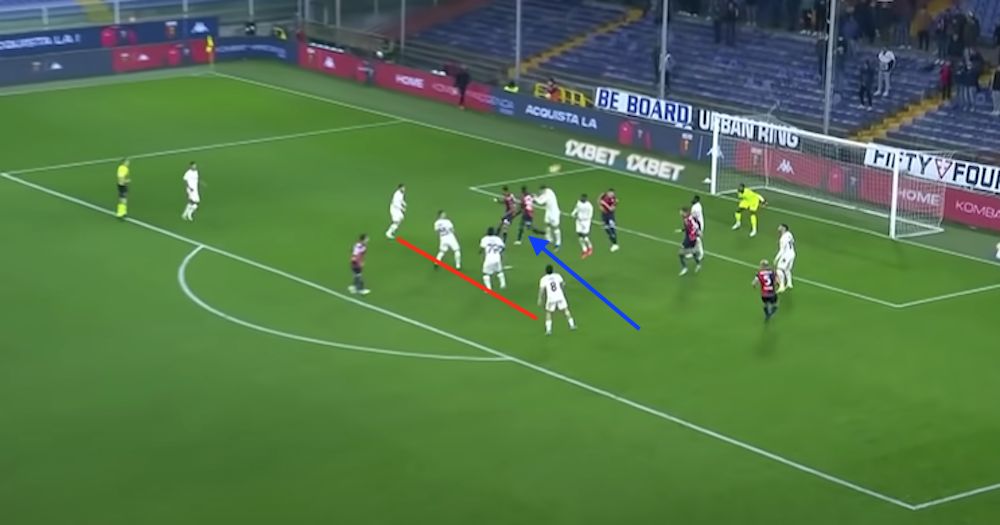 Milan’s third goal was without a doubt the best sequence strung together all night and it came from another overload down the flank, but this time the left side. Tomori is playing almost as a left-back and starts the move in a smart way, taking advantage of the tight man marking to advance the ball up the wing knowing others could then be brought into play. 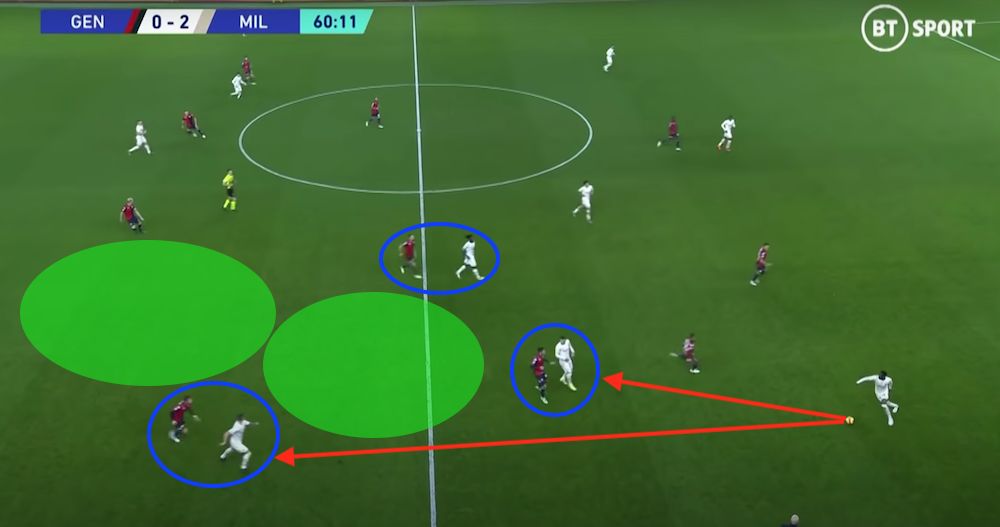 Sure enough this set Theo on his way, and Rade Krunic provided his biggest contribution via a fantastic flick around the corner to the Frenchman. The space in behind between the right wing-back and right-sided centre-back for Genoa had been appealing from the first pass and it was all of a sudden exposed to attack. 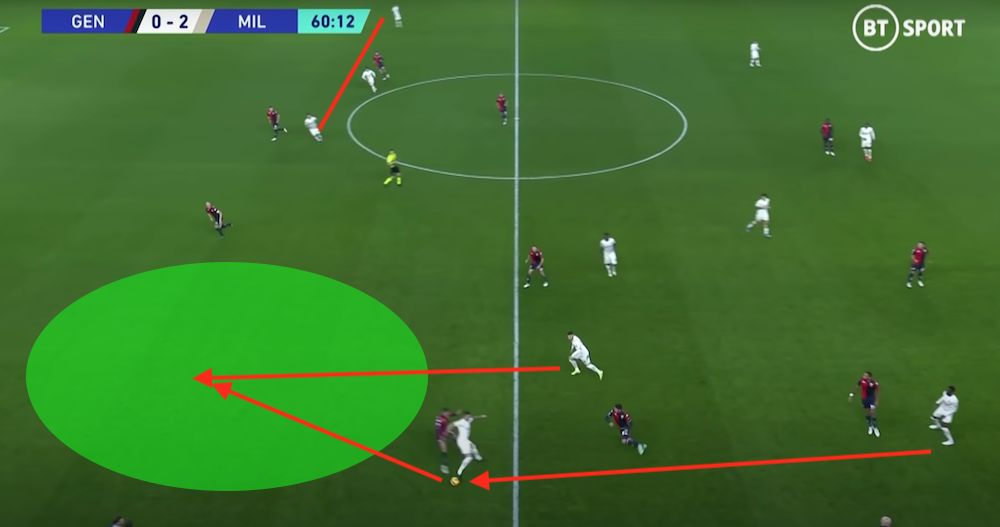 Theo Hernandez carries the ball and preoccupies his man in isolation given he normally cuts to the byline. Substitute Pietro Pellegri’s movement is smart as he pins his man and creates space for Brahim Diaz. Messias is once again taking up a position as the spare man on the far right. 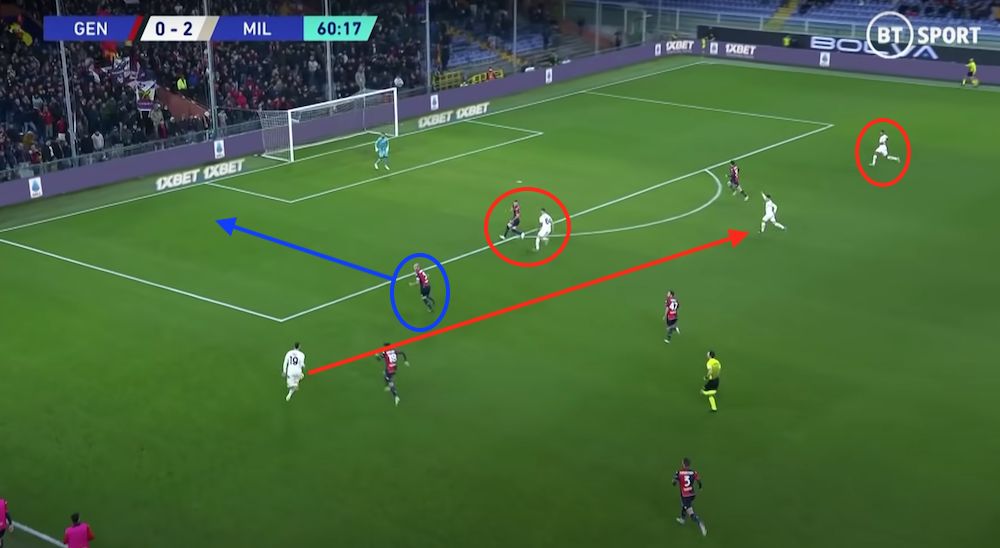 Theo pulls the ball back to a virtually unmarked Brahim Diaz, who has already premeditated his decision to tee up Messias. 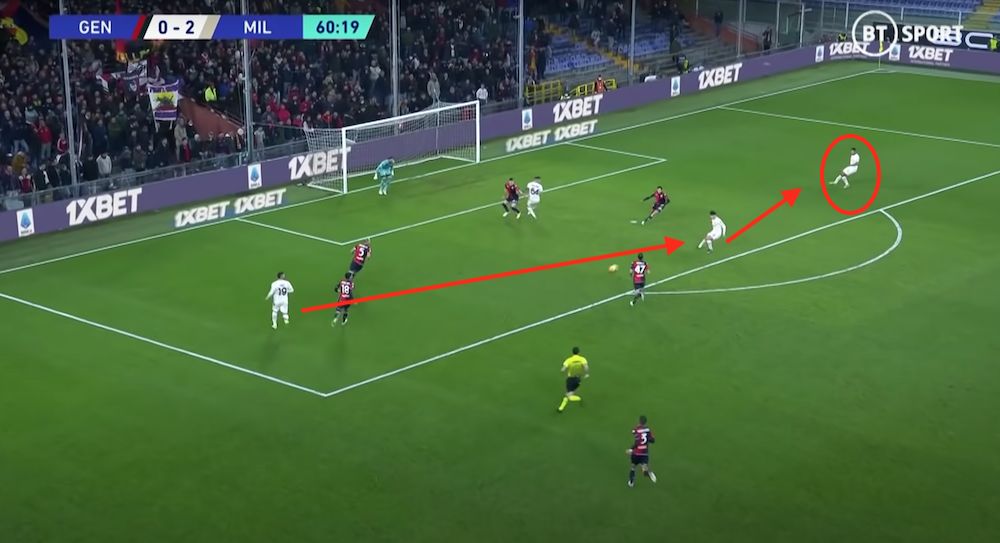 Messias played like a right-sided Ante Rebic for Milan against Genoa and this finish perhaps best illustrates this. Rather than trying to thump the casing off the ball, he spots the gap and finishes with the ice cold composure that will have made the Croatian proud. 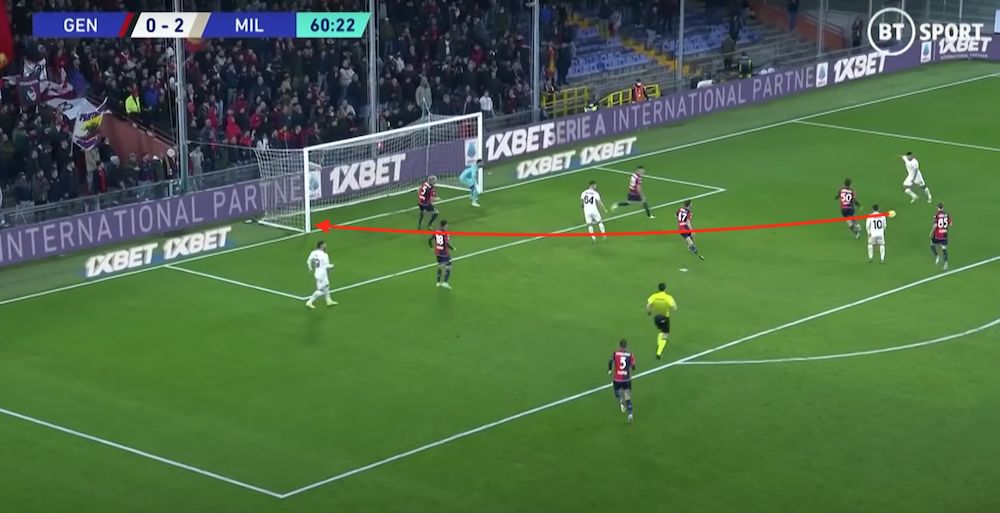 The average player positions of the first have demonstrate an earlier point regarding Milan playing with a wave of forwards rather than just attempting to overload down the middle. The formation almost resembles a 2-2-6 which says a lot about the desire to get the game put to bed and the confidence on the ball. 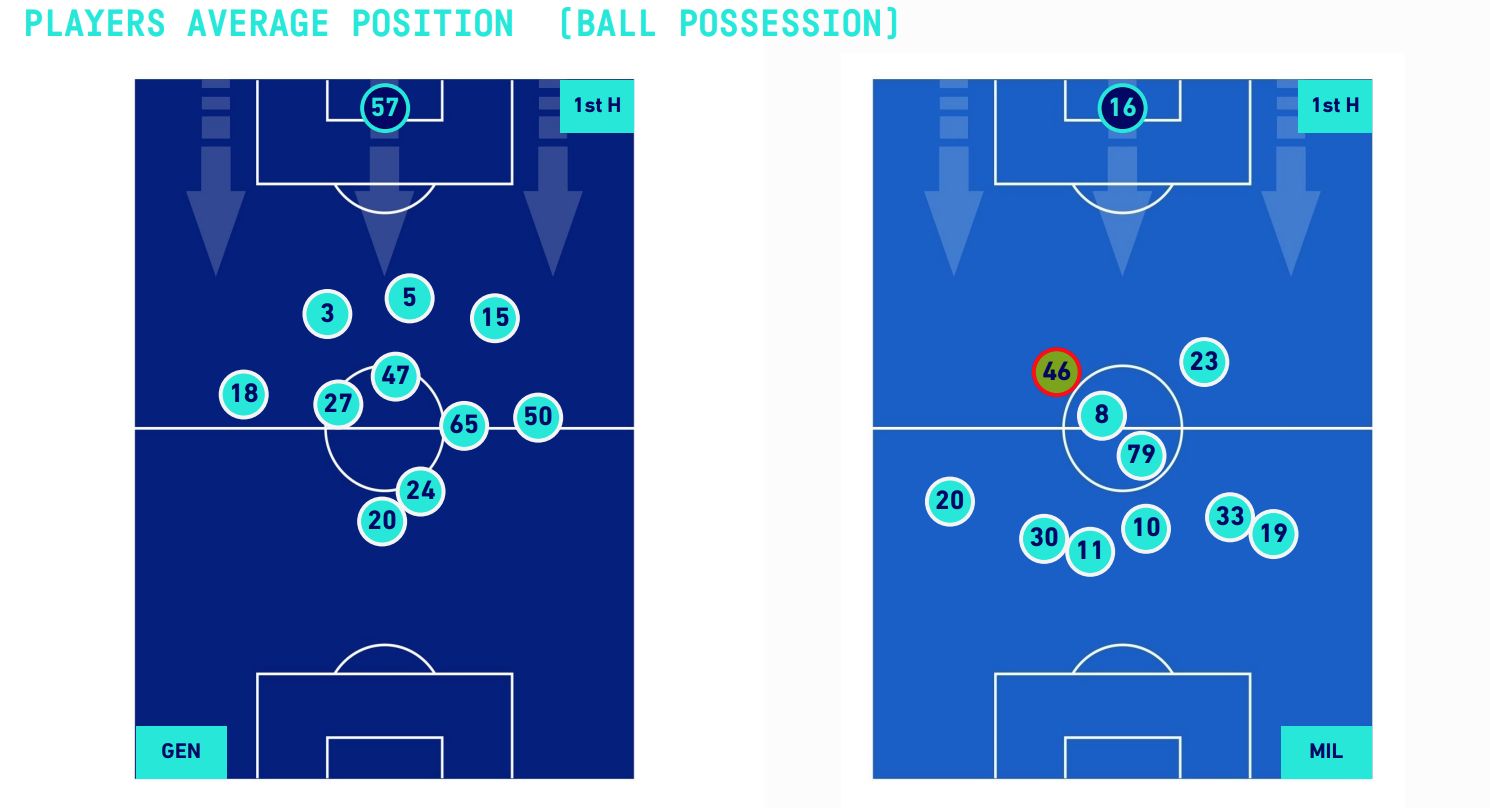 The heat map also shows how much Milan outplayed their hosts. They had more touches all over the park but particularly wide right in the first half and in midfield in the second half. Genoa on the contrary look like they are playing on a pitch 1/3 the size of the full thing. 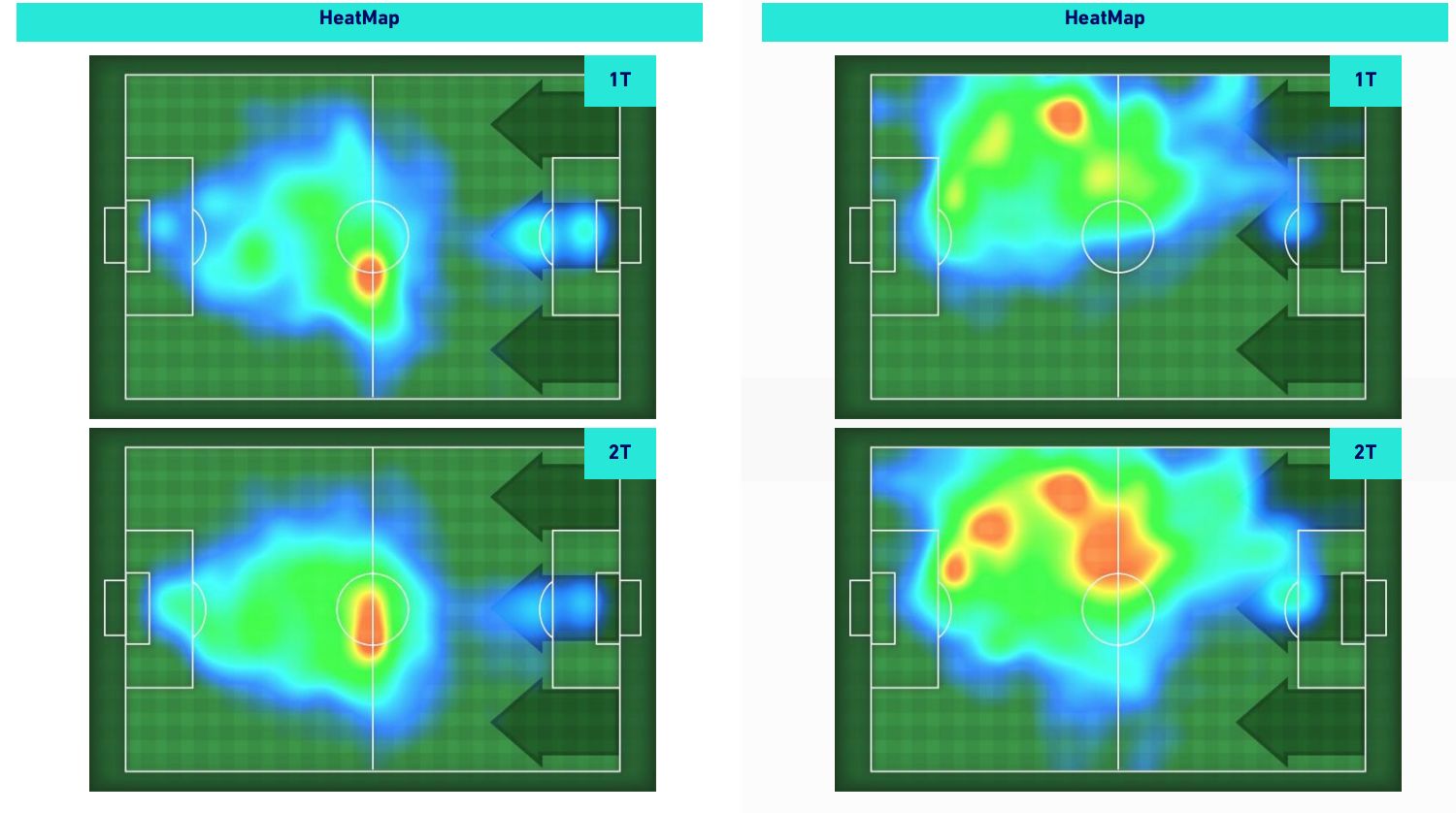 The touch map also shows how Milan targeted the flanks to create those overloads and get in behind with quick interchanges. The Rossoneri also had almost twice as many touches in Genoa’s third than vice versa, and more in every other area. Theo Hernandez had as many touches (5) in the Rossoblu’s third as Genoa’s top player Ekuban (5). 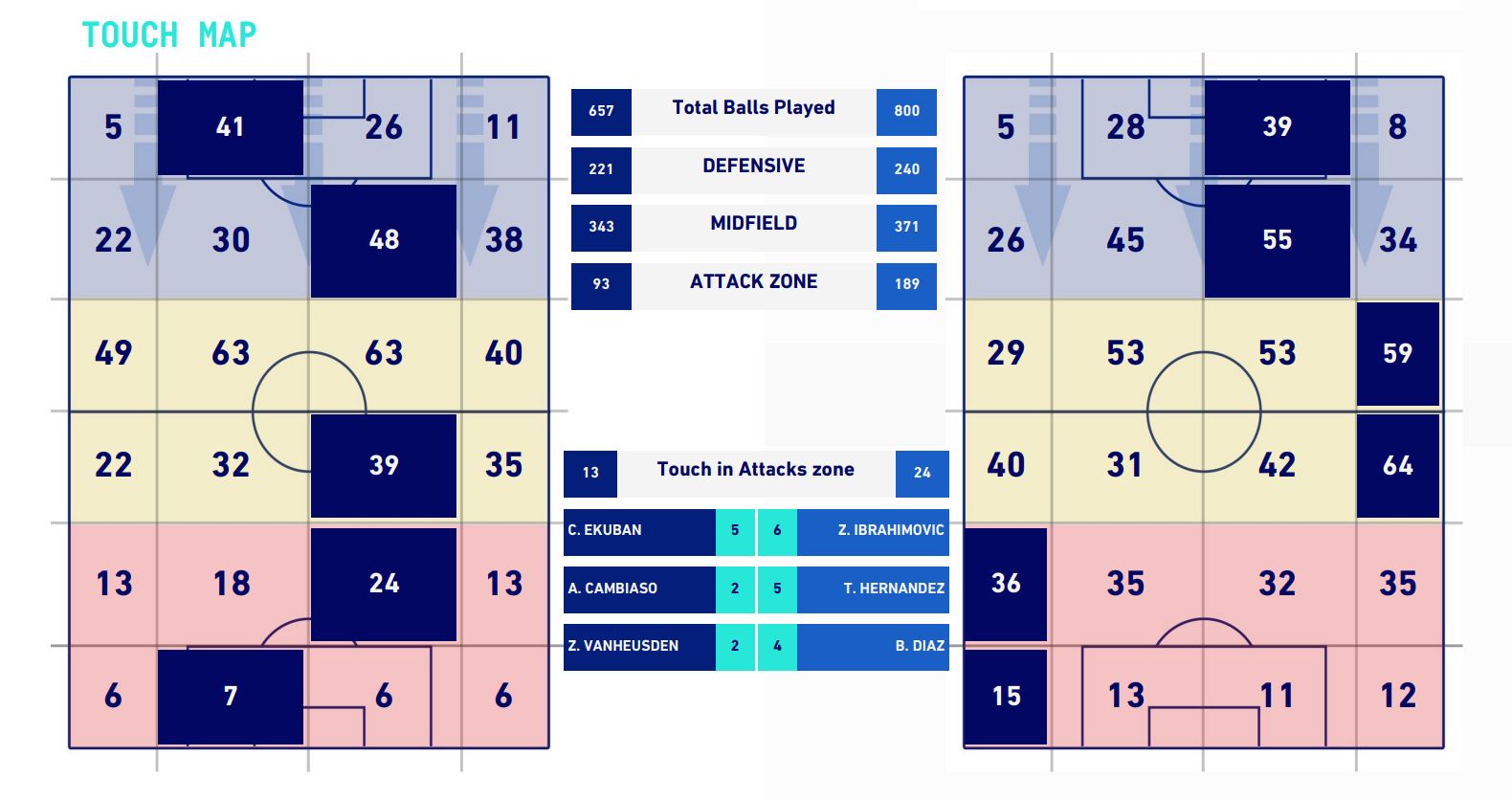 The result was the most important thing on Wednesday night after the small winless run, but the professional, efficient and controlling nature of the victory were pleasing too. Pioli cannot let the team get carried away though given they faced a side in the bottom three with eight absentees including their three top scorers.