AC Milan managed to make it nine wins out of ten to begin the Serie A season but they were made to work very hard for it by a resilient Torino side.

Coming into the game it might have been reasonable to expect that it would not be another seven or eight-goal thriller, given that Milan are running low on energy midway through a stretch of eight games in 22 days, as well as Torino being an opponent that had scored 12 and conceded just 10 in their first nine league games before their visit to San Siro. Below is a brief tactical analysis…

Milan took the lead 14 minutes into the game, and it came via a set piece. Sandro Tonali whipped in a corner from the right side, with Torino clearly deploying a mix of zonal and man marking. The maroon arrows depict who is supposed to be picking up who, with the Rossoneri exploiting Krunic well as the spare man.

The arc of Torino defenders are prepared to have to meet a ball closer to goal than what they did, and the flick-on exposed the overload they had allowed at the far post. Stood like statues, the defence could only watch as Giroud arrived to tap home from a yard out after a clever run. 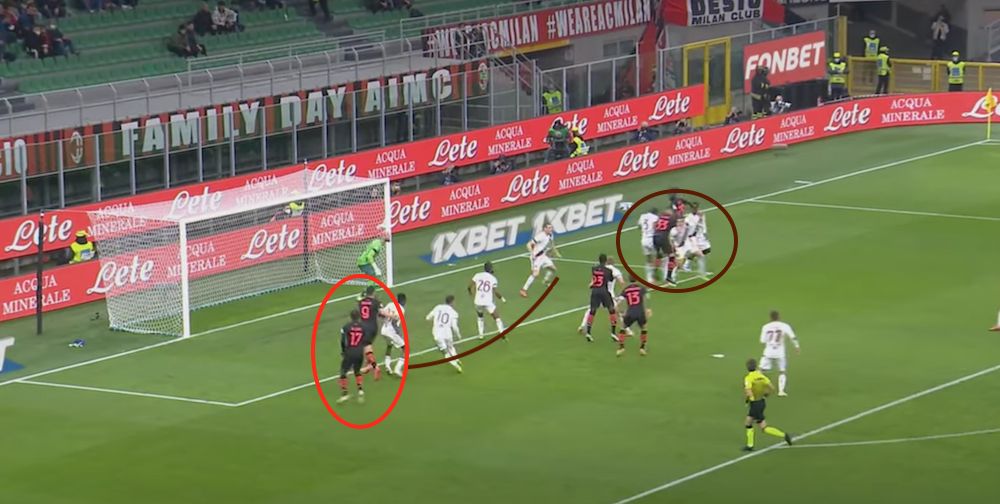 Torino are known as been a physical side under Juric who give little space by defending quite company, using the three centre-backs and four across the middle to restrict chances. Milan moved around a lot more to create room when they had the energy in the first half and were pushing for a second goal.

Below, we can see how just a simple double push-up of Tonali and Calabria (circled) and the presence of Giroud creates a situation where the defence is pinned into position, allowing Leao to stride into space and shoot into the arms of Milinkovic-Savic.

The tough thing that Milan now have to deal with is that so much of their game is built around being intense but very organised in the press. Given the hectic schedule and the injuries to depth players which has meant a lot of starters working overtime, we saw fatigue and sloppiness take hold.

Torino had two decent chances to level where they cut through Milan and the first starts below. A disorganised midfield means that a simple two-yard offload and turn exposes the space between the back four and the double pivot. Off screen at this point is Belotti who has Kjaer pinned, while Linetty has dropped off to receive the ball and spring the attack.

Tomori is drawn up to try and get straight to the receiver of the ball – as he tends to do so well – but in doing so he leaves Belotti and Kjaer in a one-on-one. Theo Hernandez might have been able to help but the presence of Singo on the right side had him preoccupied. 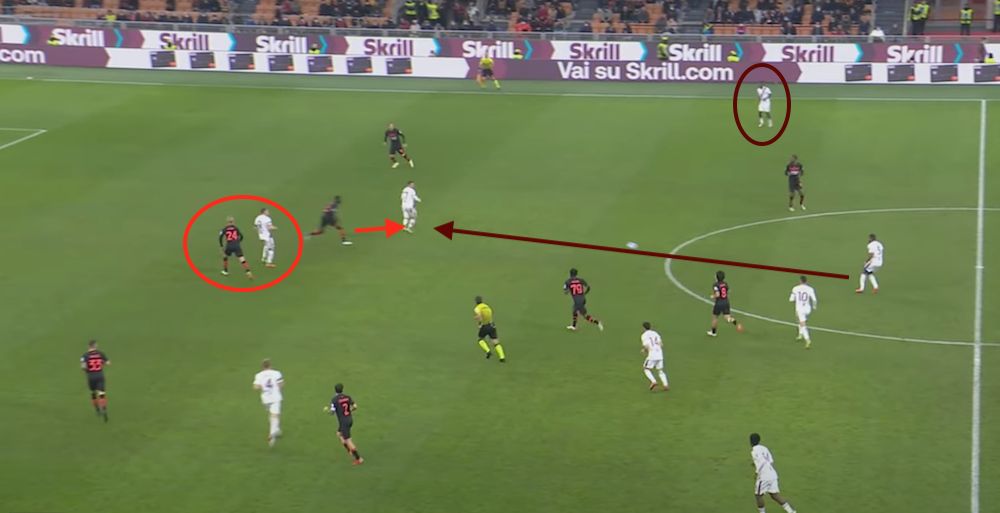 Theo acts too late (but he is not really to blame here) while the pass is slid through as Kjaer knows he has lost the footrace after Belotti’s dart to the near post. The Dane slid to attempt a block and luckily the shot was scuffed, but if Il Gallo were firing it could have been a goal. 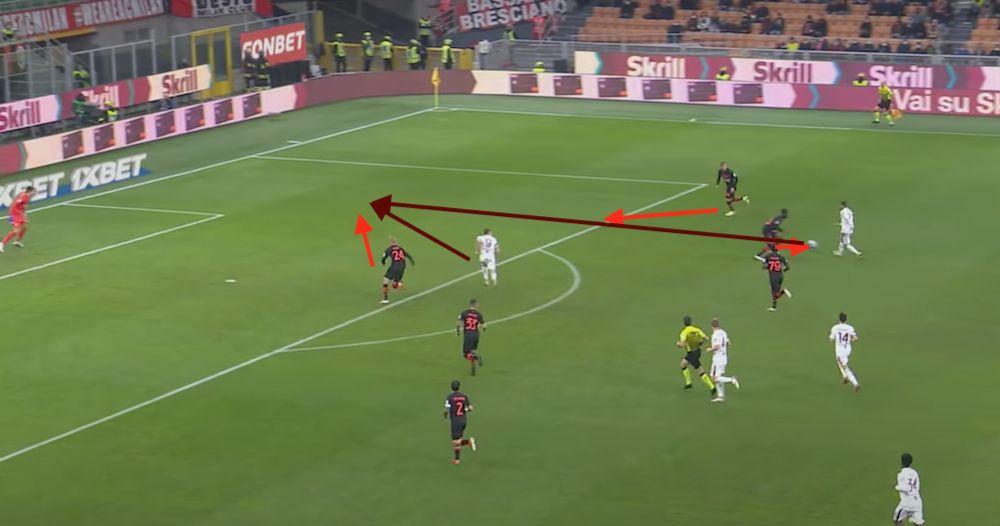 Again Milan are pressing fairly high up the pitch but they are not getting into the right positions to pressure as they usually do. Pobega would normally be pinned to the touchline if this were a press with a full battery, yet he is given the time to pick out a ball he knows will cause problems due to the space between the midfield and defence. 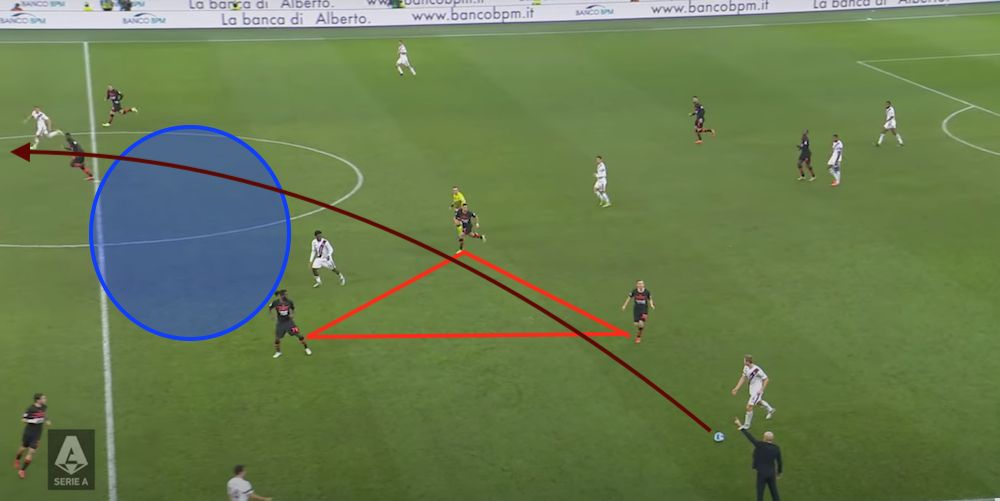 Good midfielders can work out in a flash where a second ball might drop, and that is why the ball over from the Milan loanee caused such problems. Bakayoko is the man who enters the duel but as the ball drops the disorganisation is exposed.

Tomori playing deeper gives Sanabria a space to run into while Kjaer is torn between trying to block the pass and going with the man. All this is while Kessie and Bennacer are at least 20 yards behind the play. 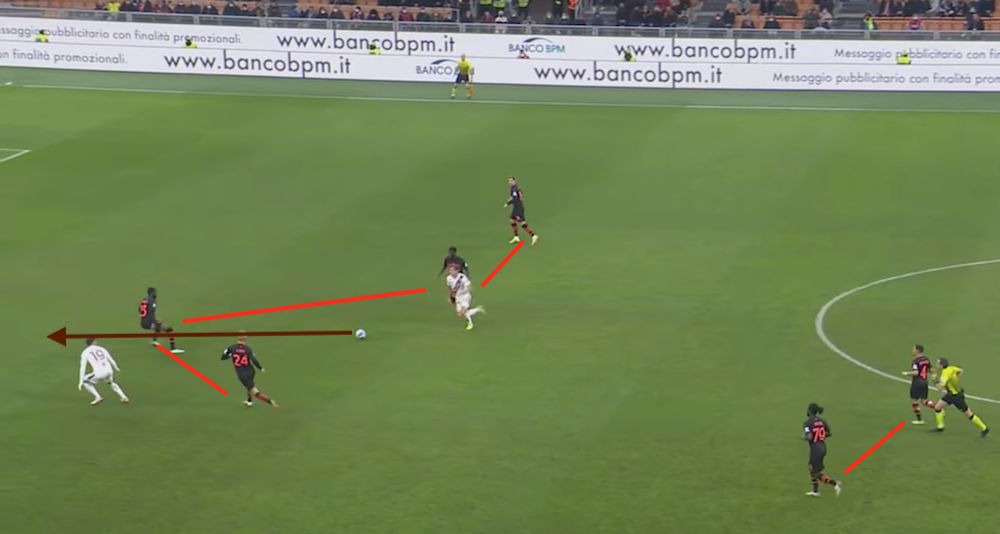 Milan were unable to do their usual overlap/underlap on the left side because of the decision to play Kalulu as a left-back. He really struggled positionally and physically, as Singo gave him a torrid time and he showed nothing at all going forward.

Pioli gave Leao a free role since there was no reason for him to be glued to the left – as seen by the occasions above he is spotted centrally – and Krunic shifted more over to the left given his greater defensive proficiency, to help cover Kalulu. Even Saelemaekers shifted over to the left wing towards the end of the first half with Pioli probably fearing a second yellow for the ex-Lyon man.

There were several signs that Milan were trying to get the win while expending as little energy as possible, but the post-match report is what gives it away the most. The positions of the Milan players in both the first and second half – even after substitutions – was very narrow which suggests the Rossoneri were happy to try contain and frustrate after their goal. 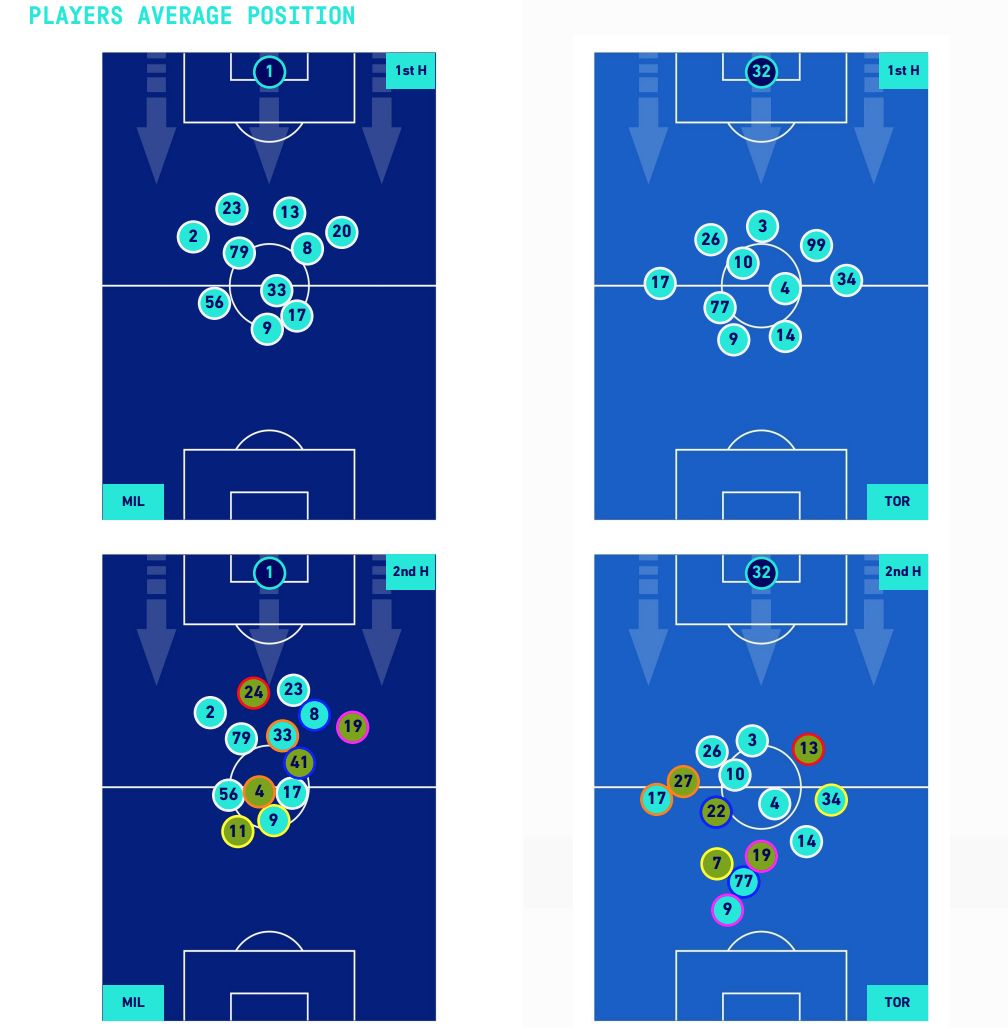 The heat map shows that Milan (left) were not required to play in their own half that much and had their most dominance between the 18-yard box and the halfway line down the middle. Torino won’t have minded that, as it’s where they had the bodies to deal with danger. 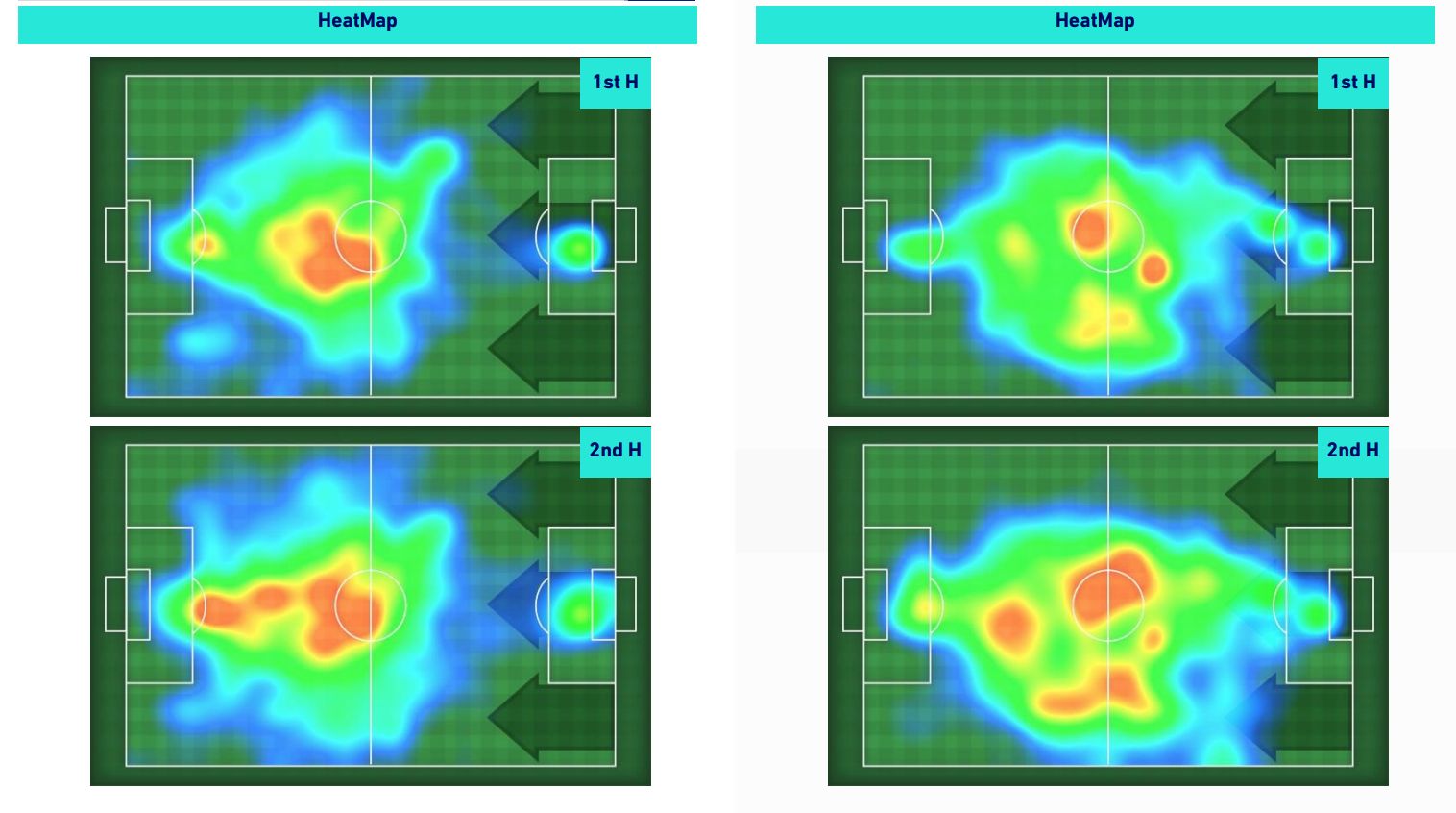 Finally, the touch map shows a lack of presence in the final third. Milan had just 108 touches in the final third of the pitch compared to 309 in the middle third. Simply put, they just didn’t have the creativity or probably the legs to hammer away like normal. 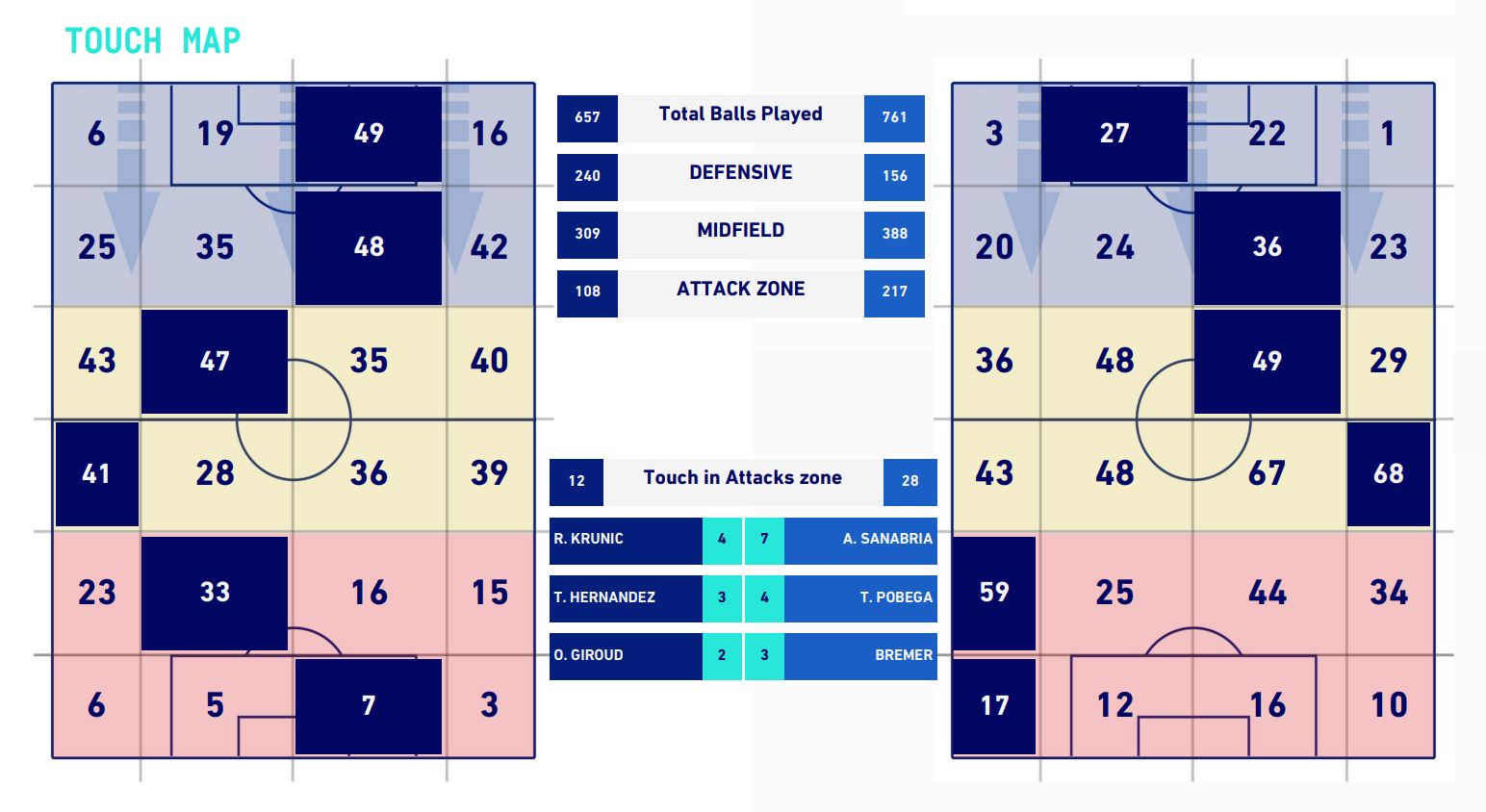 Surrendering two late goals to Atalanta, falling 2-0 behind against Verona, putting in a terrible performance against Porto and letting a two-goal lead slip against 10-man Bologna were perhaps signs that this team are struggling to keep up the energy levels.

The common theme in Serie A at least is that the wins are still arriving. The return of Theo Hernandez, Ante Rebic and Brahim Diaz is crucial to breathe fresh life into the attack, while midfield depth from Bakayoko and Krunic is also going to be important to tackle a much more challenging trio of games against Roma, Porto and Inter before the international break.

READ MORE: Midfielder shining for Monchengladbach – regret and pride for Maldini and Massara