The AC Milan Women played AS Roma last Sunday and earned themselves a 1-1 draw. Milan walked away with a valuable point, which will allow them to keep apace in the race to play in next season’s Champions League.

During the first half of the match, Roma frenetically pressed Milan. They would clog the middle and individually mark players, thus forcing the Rossonere to send in long balls over the top.

The Giallorosse would also close down space and disrupt passing channels through individual marking. 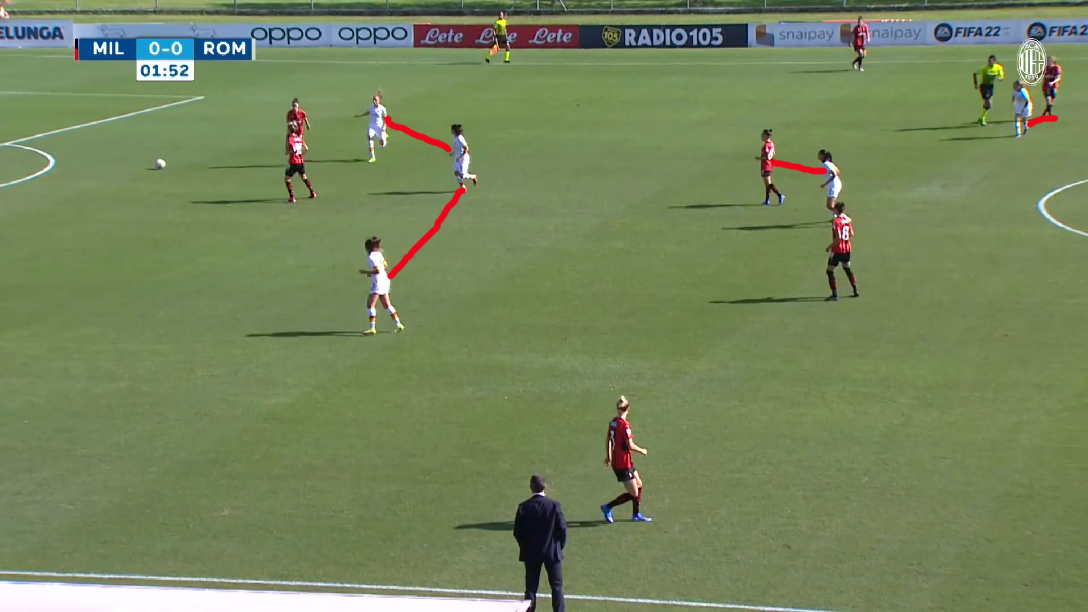 Milan, on the other hand, kept their distance from them during the first half. At times, Roma were allowed to run through the park with ease. This is most likely because Refiloe Jane was not on the pitch. Had Jane been there, then she would have closed down the middle and not let Roma make free runs on goal.

And the failure to close down the middle of the park is what led to the Giallorosse drawing first blood.

Sara Thrige, unfortunately, had a tough time dealing with the speed of both Andressa and Annamaria Serturini on the left. As a result, Thrige failed to close down Serturini and Roma scored their first goal of the match.

Eventually, Guðný Árnadóttir had to move to the left to provide more defensive stability for Milan. She proved much more adept at shutting people down.

Guðný occupying the left would force Thrige to drop into the midfield and occupy a more central role. Milan started off with a 3-4-1-2 formation, but it eventually became a 3-5-2 to accommodate this change.

Though Árnadóttir deserves praise for her defensive work, Laura Giuliani deserves plaudits as well. The shot-stopper kept Milan in the game with a few, crucial interventions, including this one against Giada Greggi. Overall, Giuliani had four saves in the game.

The second half was characterised by Roma’s inability to keep up their frenetic pressing during the first half. This would lead to a lapse of concentration on their behalf, as a failure to properly mark Christy Grimshaw would allow her to score this rather fortunate goal.

Their attacks per minute stats in the last 45 minutes would also attest to this. It increased slightly from 0.29 to 0.38, as the Rossonere were keen to take advantage of Roma’s tired legs.

Running through the middle

Vero Boquete running unchallenged through the middle was also a sign that Roma were fatigued, as they did not close her down. The midfielder made two separate runs up the pitch before lobbing off a pass to her teammates. Unfortunately, neither of those passes resulted in goals.

It seemed like Valentina Giacinti had to go at it alone for long stretches of the match. Lindsey Thomas, who was signed to bolster the attack, has proven that she has a heavy touch. This was evident by how she fluffed her lines when she had a golden opportunity to double the Rossonere’s lead.

And despite the substitutions of Nina Stapelfeldt and Refiloe Jane in the second half, the Milan skipper oftentimes did not have the support she needed, evident by how she was being ganged up on by two Roma defenders.

Milan will have to look into signing a few attackers to ease the burden on the team captain.

If we are being honest, Milan were rather unfortunate not to come away with this match with all three points. They didn’t play horribly, but they let the chance to win slip from their grasp many times.

Their next match will be on October 31st against Fiorentina. The game will take place after the international break. Milan will have to come up with a way to beat the Viola and to not let their many mistakes weigh like a millstone around their necks.