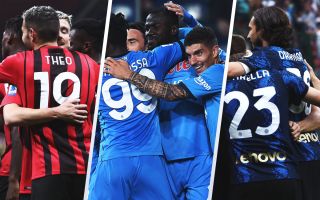 Taking a look at Milan, Napoli and Inter’s respective schedule after the break

The international break is in full swing but AC Milan will soon be back in action, scheduled to face Fiorentina in exactly one week. After the draw against Inter, the Rossoneri are in a good position in the standings.

It’s still too early to talk about the Scudetto, of course, but being able to keep Inter at a seven-point distance was important for Milan. Above all, their confidence didn’t take a huge hit and that will be crucial heading into the next face.

If you take a look at the respective schedule of Napoli, Milan and Inter, who are first, second and third in the standings, the Rossoneri probably have the easier schedule. That is not including European commitment, which all three have.

The toughest opponent Milan have in the five upcoming games after the break, on paper, is probably Fiorentina. That is the next clash, as already mentioned, but then they also have Atletico Madrid and Liverpool to face which could affect their form.

Take a look at each team’s schedule below, what do you think?