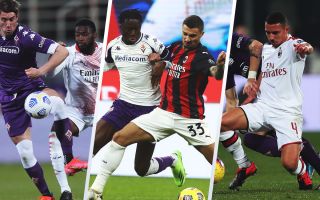 The international break has come to an end for this time and work is underway at Milanello ahead of AC Milan’s clash against Fiorentina on Saturday. An important game that could be a bit tricky for the Rossoneri.

Stefano Pioli and his players have done really well at the start of this season. Despite many injuries, they have collected 32 points after 12 games. The goal is thus to at least extend their unbeaten run on Saturday evening.

In the last five games between the sides, Milan have come out on top three times, drawing one and losing another. A positive record, therefore, but let’s dive into these games.

Fiorentina 2-3 Milan: This was the most recent match, taking place in March of this year. The Rossoneri conceded twice after Zlatan Ibrahimovic gave them the lead, but turned it around to 2-3 in the second half thanks to goals from Brahim Diaz and Hakan Calhanoglu.

Milan 2-0 Fiorentina: It was a comfortable win for Milan at San Siro. Alessio Romagnoli opened the scoring at the far post and then Franck Kessie converted a penalty. The Ivorian also missed a penalty, which was a shame.

Fiorentina 1-1 Milan: This was back in February of last year and it was when Zlatan Ibrahimovic scored that solo goal, which eventually was ruled out for a handball (wrong call, as it turned out). Ante Rebic scored the opening goal with a deflected effort, and Fiorentina equalised very late.

Milan 1-3 Fiorentina: The game that eventually led to the firing of Marco Giampaolo (after the next game). Leao scored the only goal after a very nice solo run but it was indeed a shocking performance from the team.

Fiorentina 0-1 Milan: Hakan Calhanoglu scored the winner for Milan with a header, assisted by Suso.

READ MORE: Maldini and Massara were present at Milanello today – the report of the session