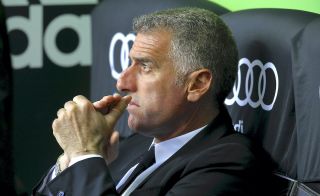 Former AC Milan defender Mauro Tassotti believes that tonight’s game against Porto is not quite a do-or-die game and praised the team’s growth.

Tassotti is a man who knows what it takes to succeed on the big stage. After making his Serie A debut with Lazio, he went on to play with Milan for 17 years and won 17 major honours with the Rossoneri, including five Scudetti and three European Cups/Champions League trophies, reaching five finals in total.

He played alongside some legends too in the likes of Paolo Maldini, Franco Baresi and Alessandro Costacurta, as well as under two of the best coaches of all time in Arrigo Sacchi and Fabio Capello.

Tassotti spoke to today’s edition of La Gazzetta dello Sport about a number of different topics starting with tonight’s game against Porto in Portugal, with his comments relayed by PianetaMilan. Milan need to get a win on the board after losing their opening two group games.

“I would not say that this with Porto is the last resort. Certainly not the very last. Milan are able to get 9 points in the last 3 games,” he said.

“The match is delicate, but I would stop at this end.And after all, the situation was delicate from the beginning, with Milan placed in the fourth pot. I think that Pioli’s team is much better in terms of quality of play.

“Of course we need to get out of the double confrontation with Porto with 4, or even better 6 points. Milan can do it. They could also go on to win in Madrid, this must be the mentality. Maybe the last match against an already qualified Liverpool could be easier. At the moment there is nothing taken for granted, even if the zero in the box weighs. Obviously the junction is here and now.”

How do you play these kinds of matches?

“I’ve played a lot of single knockout games. They help to grow, especially if the team is young.”

Would continuing to the Europa League also be a good thing?

“Staying in the Champions League would be better, it goes without saying, but even the Europa League matches would be useful in the growth path of a group that is young, it should not be forgotten.”

What kind of match do you expect?

“Milan has its own physiognomy, the one that has guaranteed successes in recent times: I expect an aggressive and fast team, ready to play the game. I don’t think Pioli will change philosophy. I would go in this same direction, his ideas have produced results. And I don’t expect a defensive Milan, even if a lot depends on the opponents: Porto are difficult to face, good technique, good dribbling. Milan, however, has the strength to impose itself.”

What about Pioli have you liked the most?

“He has made many players grow, now everyone seems better. Milan have a lot of resources now and are exploiting them very well. Just think of how Pioli fished Castillejo off the bench in the difficult moment against Verona. Nobody expected him to be a protagonist and instead he was.

“In defense now they go man against man. Think about the match against Atalanta: Kjaer under pressure on Zapata and Tomori on Malinovskyi. They are not afraid of duels. Tomori brought speed and dynamism, a player like that was needed in defense and Milan did very well to keep him.

“I like how they behave with the renewals: with Saelemaekers they went early, then certainly sorry to have lost important elements at the end of the contract, but a limit must be put. I think it is right that there is a limit of salary, otherwise it creates confusion. If Ronaldo earns a lot it is not just for the goals he scores, this too must be considered in an economic discourse.”

Will Maignan or Theo be missed?

“Theo could have found huge spaces in a match like this and upset the balance. I don’t expect Milan to be crushed in defense and therefore I don’t think Tatarusanu will be very busy. It will be a Milan far from his area, proactive. There is no Theo, but Leao is another who can tear up and open the game.”

What percentages do you assign to a Milan qualified in the round of 16?

“At the moment I would say fifty percent, but let’s talk about it again after the double confrontation with Porto. You can pass even with fewer points than expected and Milan have the character, quality and history to try. And history also weighs.”

READ MORE: The amount Milan receive from BitMEX as the Official Sleeve Partner