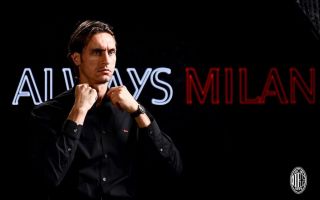 Tatarusanu reveals emotion after sealing Milan move: “I am proud to be here” – video

Ciprian Tătăruşanu has revealed his feeling of pride upon joining AC Milan and insisted he can bring ‘balance to a young squad’.

On the club’s website, they confirmed that the Romania international has signed a contract until 30 June 2023. Tătăruşanu has won 68 caps for the Romanian national team, making his debut in a friendly against Italy on 17 November 2010.

He spoke to Milan TV about his move to the Rossoneri, and his words were transcribed by MilanNews.

What are your expectations? “From this new adventure with Milan I expect to play good football, to form an even stronger group and to improve the position in the standings from last year.”

How much experience do you bring to the Rossoneri group? “I think I can bring balance because Milan are now a young team and I think I can help them with this.”

What do you think of Gigio Donnarumma? “Like the rest of the world, I didn’t know him at the beginning, but he immediately showed he was capable of playing for a team like Milan. Today he has even more experience and is even stronger, I hope to have a good relationship with him and prepare for the best together.

On the fact they are both good penalty savers: “You can save penalties only by practicing in training, staying behind to try at the end of the session and doing even more.”

Have you talked to Pioli? “Yes, I have already spoken to the coach. He welcomed me, told me that he is happy to be able to work together again and is waiting for me as soon as possible with the team in training.”

He will also join up with Ante Rebic: “Yes, I played with him in Fiorentina but we didn’t stay in contact. I’m curious to see him and talk to him.”

Training with Ibrahimovic: “It is much better to have players in the team who play very, very well, so then in the match it is easier.”

Your message to the Milan fans: “I am proud to be here, I look forward to seeing you again at the stadium. Forza Milan.”

“Proud to be here. I can bring balance to a young squad” Ciprian Tătăruşanu’s first Rossonero interview 🗣