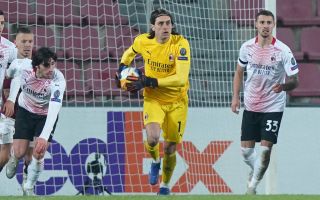 Milan came away with all three points away at Sparta Praha this evening and thus secured the first spot in their Europa League group. However, the win was indeed narrow and they nearly conceded in stoppage time.

David Moberg-Karlsson was through on goal after a long ball managed to beat both Milan defenders at the back. Ciprian Tatarusanu read the Swede and made a very good save to preserve the clean sheet, crowning his positive performance.

After the mistake against Roma, the Romanian will surely be happy with tonight’s events and he was visibly happy after the final whistle. In an interview with Sky Italia, as cited by MilanNews, he shared his thoughts on the game.

“I’m happy, it was a difficult match on a difficult pitch. I’m happy I kept a clean sheet and that we won,” he began.

He was also asked about his role at the club, which isn’t the best as Gigio Donnarumma plays almost every game from start to finish. He admitted that it’s far from easy, but that the goalkeeping group is very good.

“With Gigio and Antonio we form a good group, my role is not easy, when everyone expects me to be on Gigio’s level. Today I think I played a good game, I hope to always maintain this level.

“Dida (goalkeeping coach)? Only his presence counts a lot, when you have a coach like him it gives you a lot. There are three goalkeeping coaches, they all work well,” he concluded.

READ MORE: Pioli praises centre-backs and Tatarusanu while declaring Hauge ‘can do even better’