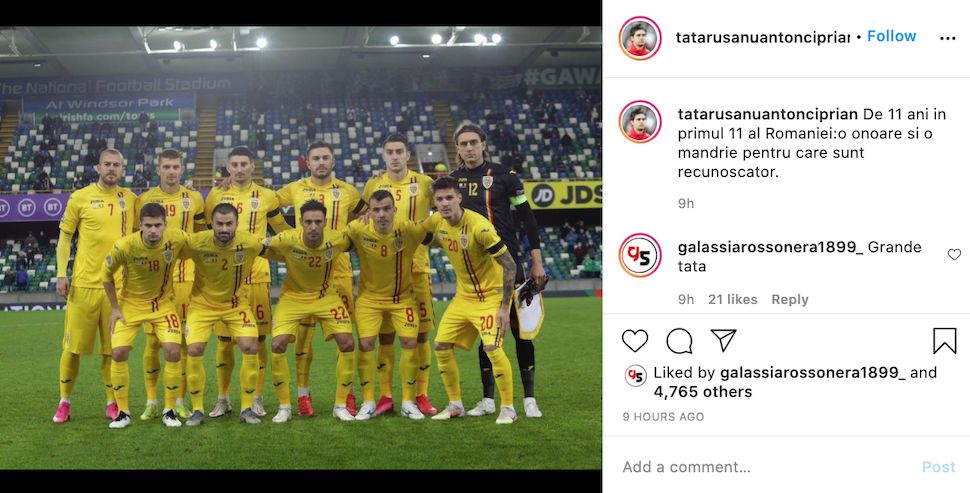 AC Milan goalkeeper Ciprian Tatarusanu has announced his retirement from international football at the age of 35.

Tatarusanu played just one of Romania’s three games over the international break, starting the 1-1 draw with Northern Ireland. He was an unused substitute and was left out of the squad entirely for the other two.

Now, he has officially announced that he has played his last game for his country via a post on Instagram. The caption reads: “For 11 years in the first 11 of Romania: an honour and a pride for which I am grateful.”

“I started thinking seriously about when I would retire from the national team earlier this year. I played for more of than decade for Romania, with honour and pride. I was grateful every time to be summoned and to be able to sing the anthem wearing the most important jersey for me.

“I will soon be 35 years old and in the last few months the belief has grown that it was time to make this decision. I have had a very good relationship with all the coaches over the past 11 years and with all the members of the coaching staff, so any speculation relating to any other alleged reasons besides the ones I share with you makes no sense. I was called up, I played, I defended Romania and in this special mission I put everything I had.

“I just think it’s time for other Romanian goalkeepers to defend the goal of the national team and for me to step back. We have young goalkeepers with great prospects, we have experienced goalkeepers who can face this role right now. One cycle has concluded, with the end of the European qualifiers and the last edition of the Nations League, another will begin soon, with the qualifiers for the World Cup scheduled for the spring. So, I think this is the best time to end my great story in the national team.

“I want to thank all the fans, the coaches, the members of the technical staff, the Romanian Football Association, the people of the administrative and medical staff, with whom I have worked and from whom I have learned so much. Maybe my way of being was not always what the public and journalists expected, but I know for sure that this way of being counted for a lot on the pitch, where I had the most important responsibility, that of defending Romania’s goal. I am happy for these 11 wonderful years and I assure you that I have always been proud to play for Romania, I have given everything for my team.

“Being able to be the captain of Romania was the best thing in my career. Thanks.”