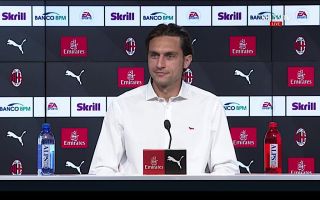 Tatarusanu: “I see that the club wants to do big things” – the full transcript

New signing Ciprian Tatarusanu has claimed that AC Milan have big plans for the season ahead, something with persuaded him to join.

Milan’s previous deputy to Gianluigi Donnarumma – Pepe Reina – completed a move to the Rossoneri’s Serie A rivals Lazio earlier in the month, and it was confirmed on Friday that Tatarusanu had been signed from Lyon as his replacement.

Olympique Lyonnais also revealed that Milan have paid a €500k fee for the former Fiorentina man, who made his debut for the Rossoneri during Saturday’s 3-1 friendly win over Brescia.

Tatarusanu spoke to reporters at his official presentation at Casa Milan on Tuesday afternoon, with the questions and answers transcribed by MilanNews.

Do you feel the trust? “I see that the club wants to do big things, we’ve seen that they managed to achieve things during the mercato, and I am pretty confident myself.”

On Steaua Bucaresti: “I was a Steaua fan like my father, I grew up with their games in Europe. They had a great team and all the children dreamed of coming to Steaua and winning the league, I was lucky to make this dream come true.”

On Italy: “I had my first friendly with the national team against Italy, I remembered that my first match was there in Austria. Many Romanian players played in Italy, it’s easier for us Romanians to emerge here.

“For me the national team is very important, I played a lot and I still want to do well. We have the playoff against Iceland, here I have to do my best to be ready when the coach puts me in the team.”

On the return of the fans to the stadiums: “It is not easy to play without fans, in France there are already fans in the stadiums. There are 5 thousand and even if there are not many, it is another sensation, it is already a little better. I hope that in Italy they will reopen too.”

When you heard that Milan were interested how did you feel? “I was happy when such an important team in the history of football is looking for you, which has had so many strong players, I immediately considered coming here.”

On the role of the deputy to Donnarumma: “I was a back-up only at Lyon, it’s not easy. You have to train 100% knowing that you won’t be on the pitch on Sunday. But I like challenges, I will always give everything and I hope to help the team when I will have the opportunity.”

A reported asked about Ilicic’s missed penalty in Fiorentina-Milan, and whether Donnarumma influences who takes penalties.

“I remember that game, it ended 0-0. Gigio is very good on penalties, he is tall and pushes well. For those who shoot it is very difficult to score, they have to shoot very well. I am also one who saves many penalties. Perhaps for this reason the players lose their composure.”

On Pioli: “I did little work with him in Florence, but when I got here he immediately showed me what he wants from the goalkeeper.”

On ending his career at Milan: “Why not? It’s a great team, many players dream of this.”

On what he brings to the locker room: “I’m a new player, I still have to establish a relationship with my team-mates.”

On Donnarumma: “He is young only in age. As a goalkeeper I can steal something from everyone. It is a profession in which you learn but also in which you steal things (laughs)”.

Is there any young players that have stood out? “I only did one training, it’s hard to tell.”

What do you like about the Italian league? What is your best memory?

“There is a lot of detail, a lot is demanded of us and we focus on every detail. I like it, even if at the beginning it is not easy. The French league is very different from the Italian one but I will do everything to adapt to the coach’s requests.”