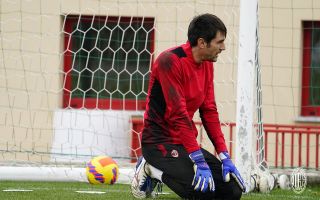 Many fans were worried about Mike Maignan’s injury which will keep him out for the rest of the year, but Ciprian Tatarusanu has so far stepped up and done a fantastic job.

During his first few games of the season he looked a bit rusty which is to be expected having been a back-up for the last few years of his career and all of a sudden being thrust into a position where he knows he will be the starter until late December, but his form has kept getting better.

Tatarusanu’s rise certainly culminated in the Derby della Madonnina before the international break when he saved a penalty from Lautaro Martinez to keep the score at 1-1 and ultimately earn a point for his team.

The Romanian veteran spoke to il Corriere dello Sport to reflect on the importance of that save, his current moment and ambitions for the season ahead. His comments were relayed by MilanNews.

“I have saved many penalties in my career, but I didn’t know that for 40 years a Milan goalkeeper hadn’t saved a penalty in the derby, I’m very happy, doing it against Inter adds something more. I studied Lautaro like other Inter players, potential penalty takers. It was a good save,” he said.

Regarding Milan and the Scudetto race, Tatarusanu revealed his belief that there are a number of teams fighting to be champions.

“I’m part of one of the strongest teams in the world. It’s a good story. I’m sorry for Maignan’s injury, but I’m happy to play at these levels, I hope to be physically well and to have other performances at this level. We take every game that comes, we hope to always give our best. Napoli are in the lead with us, but there are other great teams that can fight for the Scudetto, including Inter.”

He also discussed his future at the club moving forward.: “I have a year and a half on my contract, I don’t think about a renewal right now. What matters is to feel good and have these performances. There is no rush for the renewal. Of course, I’d like to continue here, I feel very good at Milan. But the new contract is still far away, we can talk about it in a year and a half.”

Finally, Tatarusanu was questioned about what it is like to play alongside Zlatan Ibrahimovic.

“How many times do I hear this question! He is a tried and tested player, very strong, it is right that he is the leader of Milan.”