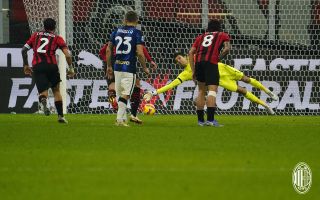 Ciprian Tatarusanu continues to get the plaudits as AC Milan’s hero from last night’s 1-1 draw against Inter in the derby.

Speaking on SportMediaset (via MilanNews), Claudio Raimondi praised the performance of Tatarusanu which was one that ensured Milan at least got a point from the game thanks to a decisive save from Lautaro Martinez’s penalty that would have made it 2-1.

The Romanian goalkeeper had studied the opponent and redeemed himself definitively in the eyes of the fans after being called to replace the injured Mike Maignan amid skepticism and criticism over the level of his performances before.

In terms of the other selection choices that Pioli made, Raimondo comments that the idea of ​​field Brahim Diaz on the right was not entirely convincing, while it seems Pioli wanted to squeeze every last drop of energy out of Rafael Leao after the long unavailability of Ante Rebic.

Zlatan Ibrahimovic seemed isolated when he came on but Alexis Saelemaekers, Ismael Bennacer and Rebic himself deserve praise for their impact off the bench.