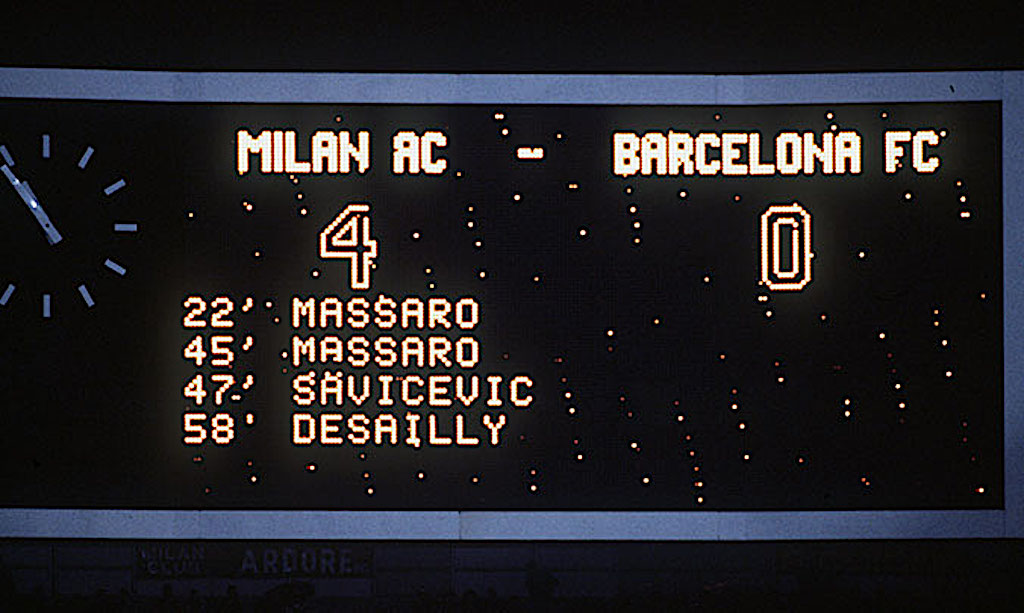 That night in ’94: When Milan overcame Barcelona’s dream team against all odds

In an interview in 2009. Fabio Capello said “Barcelona thought all they had to do was show up and beat Milan, well, you have to do a bit more than that.”

On the night of the 18th May 1994, it was the Rossoneri that showed up and clinched yet another European Cup and gave ‘Don Fabio’ the crowning moment of his managerial career.

To add some context to that particular campaign 26 years ago, Dutch legends Ruud Gullit and Frank Rijkaard – so influential in previous years – were no longer with the club. In addition to that, the third of the Dutch triumvirate, Marco van Basten, was injured for the entire year.

In the middle, Frenchman Marcel Desailly was signed from Marseille, while Demetrio Albertini and Zvonimir Boban had both firmly established themselves in the team and up front new signing Jean-Pierre Papin superbly complemented the likes of Daniele Massaro and Dejan ‘il Genio’ Savicevic.

Il Diavolo clinched a third successive Scudetto in the second-to-last match against Udinese, finishing three points above Juventus. They then romped to a second consecutive Champions League final, getting past FC Aarau and Copenhagen in the first two rounds, before topping a group containing Porto, Werder Bremen and Anderlecht and triumphing by a 3-0 margin over Monaco in the semi-final.

The joy of making the final was tempered by the fact that central defensive duo Baresi and Costacurta were sent off versus the French team and would be suspended for the showpiece final. In addition to which the most expensive player in the world Gianluigi Lentini was injured and would miss the match in Athens.

As defender Fillipo Galli would also elude to years later, the Milanisti were having difficulties getting to Athens, so they would be outnumbered at the stadium. Even with a Coral promo code you might not have bet on Milan.

Then there was the small matter of the fact they would be facing Johan Cruyff’s ‘Dream Team’ of Barcelona. The Catalans had just won a fourth consecutive LaLiga crown and had the likes of Romario and Hristo Stoichkov up front, a certain Pep Guardiola controlling the middle plus Ronald Koeman and Nadal at the back.

The odds were fimly stacked against Milan and very few gave them a chance, but what took place at the Olympic Stadium in the Greek capital has literally become stuff of legend in the city of mythological fable.

Much has been said about the arrogance of Barca heading into the final, with pictures of their players touching the trophy and downplaying Milan’s abilities, but in a strange way that motivated Milan’s players even further.

It is also worth mentioning the fact that there was a three-foreigner rule in effect, so the likes of Papin, Brian Laudrup and Florin Raducioiu could not play, but that did not matter.

Capello used a 4-4-2 formation and urged his team to press the Barca players whenever they reached the half-way line, which was superbly being implemented by Albertini and Desailly. It allowed Maldini and Galli to drop that bit deeper, which meant that Romario and Stoichkov had little to no space to work their magic.

The Rossoneri had the ball in the back of the net in the 10th minute when Panucci headed a Donadoni cross, but the linesman incorrectly ruled the goal for offside.

After some sparring between the two teams, the team in white took the lead. From pressing the Barca backline, Savicevic collected the ball, made a marauding run down the right, managed to chip the ball to Massaro while falling and the striker stretched to score.

The upset was beginning to take shape.

On the stroke of half-time, the Diavolo doubled their lead with a team goal that was the epitome of beautiful football. A long ball from Galli to man of the match Savicevic saw the Montenegrin play a one-two with Boban (including a back-heel), before the Croat played another one-two with right back Tassotti. He then sent the ball to the other wing where Donadoni collected, beating his marker and charging into the penalty area, finding an open Massaro who fired home.

Given the array of attacking talent in the Barca team, the Rossoneri still needed to be wary of a comeback, but they put an to that just a couple minutes after the interval as Savicevic got the goal that his display that night deserved.

The number 10 won the ball off Nadal, noticed the goalkeeper Zubizaretta off his line and from a narrow angle with precise technique lobbed the ball over his head and into the net in what is still regarded as one of the best goals in a major final to this day.

After the concession of that third goal, the Barcelona players started fouling indiscriminately with a series of nasty late tackles that in today’s game would result in straight red cards.

However, despite that, Milan continued to attack in search of more goals and eventually scored a fourth and final strike. From open play, Savicevic hit the post, but as Barca tried to push the ball forward, Milan pressed them.

Albertini won the ball, kept his balance enough while tackled to pass to Desailly, who scored one on one with the goalkeeper with an right footed inside out shot. Even Capello – a notoriously stone cold character – cracked a smile.

There were still over 30 minutes left to play, but Milan more or less sat back and soaked up whatever little pressure came from the opposition, as they knew the hard work was done.

Captain for the night Tassotti held aloft the European Cup and the Milan fans that did manage to make it to Athens rejoiced as witnesses to a truly remarkable night.

There have been many legendary performances in the 120 year plus history of AC Milan, but that night on the 18th May 1994 was arguably the greatest.