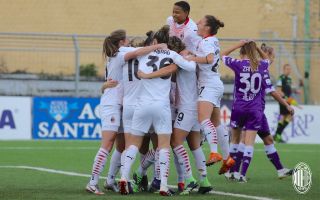 The AC Milan Women beat Fiorentina 1-0 on Sunday. The game-winning goal came courtesy of Giorgia Spinelli, who headed home a goal at the eight minute.

With this victory, Milan secured the vital three points they needed to keep apace at the top of the standings. They also beat a direct rival and for the first time in their history, they beat Fiorentina at the Stadio Gino Bozzi.

Though Milan won the match, the game itself wasn’t very pleasant to watch. The Rossonere struggled to get anything going offensively as once again, the midfield looked rather disjointed at times.

They also seemed to sacrifice playing well for the sake of pragmatism.

Despite this, a few players managed to shine above the rest during this match. The players were Valentina Bergamaschi, Linda Tucceri Cimini, Verónica Boquete and of course, Giorgia Spinelli.

It is rather fitting that Spinelli was also voted the Player of The Match as well. A more detailed match review will be posted later on. For now, enjoy the highlights below.

#FollowTheRossonere: a hard-fought battle to relish, relive our away win against Fiorentina 🤩