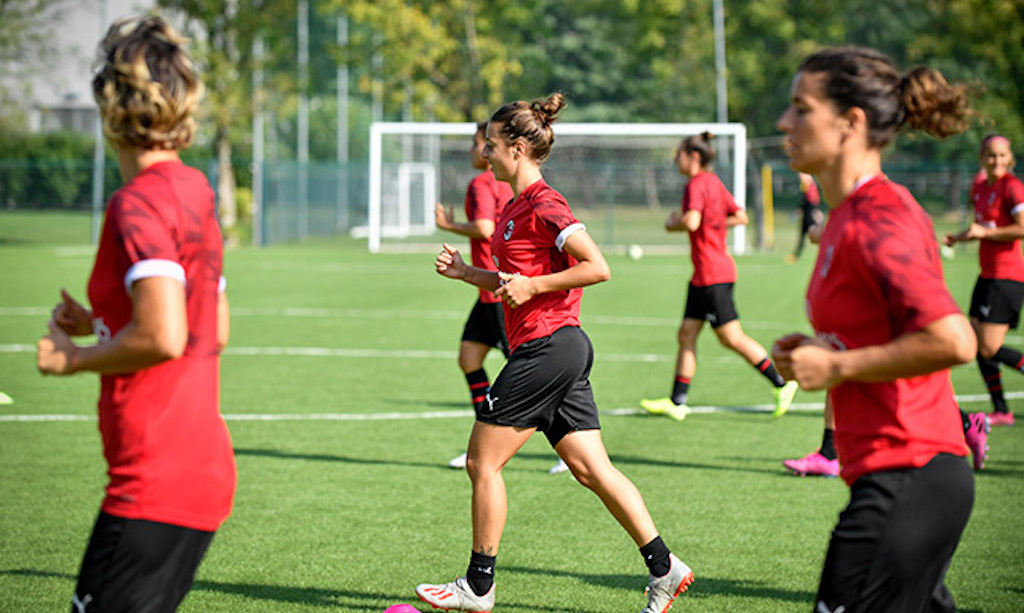 On Monday, May 25th, AC Milan captain Valentina Giacinti confirmed that the Rossonere would resume individual training this week.

The captain’s confirmation comes one week after coach Maurizio Ganz confirmed that the women would undergo testing for COVID-19, before resuming individual training.

AC Milan are the second team in Serie A Femminile to resume training, after Juventus.

Juventus has a head start over Milan, as they started training their players over a week ago.

The Rossonere are resuming training for a possible resumption of the league.

Serie A Femminile was initially set to be canceled for the season, due to the ongoing COVID-19 crisis. However, after some successful lobbying, the league was brought back from the precipice. The Italian government is now working on helping the league finish the season.

The main thing preventing the league from restarting is the issue of funding. While teams like Milan and Juventus can afford to adhere to the government’s health protocols for the resumption of play, as they are backed by wealthy men’s teams, other teams in the league can’t.

In particular, teams like Tavagnacco, Orobica, and Pink Bari can’t afford to pay for everything they’ll need to keep their players safe. Pink Bari has made their opposition to the health government’s health protocols well-known. Team doctor, Chiara Marini, has said that the health guidelines ‘are impracticable’. She also stated her team would also not be able to guarantee compliance with the protocols, as they simply can’t afford to do so.

They may soon be receiving help in this regard, however. The Italian government reportedly has €11 million in funds that are available for the league. The confirmation comes courtesy of senator Tommaso Nannicini (Democratic Party). Nannicini was also one of the senators who introduced an amendment that would allow Serie A Femminile to professionalize.

The senator is proposing that the money be utilized to not only help the league resume play but to also help them professionalize as well. As it stands, the players of Serie A Femminile are still amateurs. This might change in the near future though, as sports minister Vincenzo Spadafora has confirmed that professionalizing the league is on the government’s agenda.

There is still much to play for

The Rossonere are eager to resume the season, as they still have much to play for. In particular, they are locked in a battle with Fiorentina for second place, and Italy’s last Champions League spot.

Both teams are on level points, but the Viola are ahead due to goal difference. Currently, they have a five-goal differential with Milan.

AC Milan will know whether the Serie A Femminile season will resume during the FIGC’s next Consiglio Federale. The next meeting for the federation will take place on either June 4th, or 5th.

Before the season can resume, however, they are still a few issues for them to work out. One of the issues is the deadline the FIGC has set for the league, as they have stated that the league must finish by June 30th.

That seems improbable to adhere to, given the current circumstances. Teams will need at least one month of group training before resuming play. So far, none of the teams in the league have started group training.

It would be more reasonable for the league to start in July and finish in August. There are only six games left in the season, and as Ganz and others have noted, the season can finish in three weeks.

Finishing in August would also give the league’s teams enough time to recover and to prepare for next season, which could start in September.

We’ll know what the federation’s decision on the matter will be in early June.