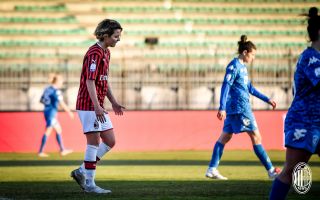 AC Milan Women lost their match against Empoli on Sunday. The Rossonere, unfortunately, made many mistakes during this game, the most notable of which, was how they completely lost control of the midfield.

Milan midfielder, Marta Carissimi, seemed to have suffered the most. Marta started the game in place of Refiloe Jane, who wasn’t feeling well and therefore, could not start the match. Her rather lethargic performance was uncharacteristic of her, and yet, it was also an indication of just how badly Milan had played.

However, it is important not to single out Marta and to think she’s solely responsible for the loss on Sunday. Rather, most of the Rossonere put on a lackluster display, and her performance was just indicative of it.

Although Milan did have the majority of the possession and shots on target in the first half, their inability to convert their chances ultimately hurt them in the end. This has sadly, been a recurrent theme for them all season. There is no better example of this, then when Francesca Vitale’s cross found Valentina Giacinti’s foot, only for her to be denied by Empoli goalkeeper Rachele Baldi at the 23rd minute.

Empoli played a stormer of a match, unlike Milan, who were perhaps out of shape due to the long winter break. The Milan Women looked like a shadow of their former selves. Eventually, the Tuscans would put Milan to the sword in the second half, with goals by Cecilia Prugna (’53) and Lucia Di Guglielmo (’82). The only consolation came from a goal by left-back Linda Tucceri Cimini, who managed to break her duck, with a goal in the 88th minute.

Unfortunately, it was too little too late, as the final score was 2-1 in favor of the visitors.

A lot to consider

Many questions will be raised by this game, mainly about the team’s physical fitness levels. The team isn’t even midway through the season, and yet they look so exhausted and so gassed.

In addition to all of this, injuries haven’t helped the situation either. In the days leading up to the match, Milan players Lady Andrade, Deborah Salvatori Rinaldi and Lidija Kuliš had all been ruled out due to injury. Refiloe Jane had also been ruled out of the starting line-up, due to not feeling well (as was previously mentioned). Milan’s newest signing, Pamela Begič, was also not allowed to start, due to the timing of her transfer and how she has yet to receive clearance from the proper channels.

All of this created a selection headache for Ganz, who had to make last-minute improvisations. As a result of this, he decided to place Sandra Žigić in an attacking trident that would normally be occupied by Lady Andrade, in addition to using Carissimi as a substitute for Jane.

A lot of questions will also be raised about Ganz’s choice of starters, chiefly why he didn’t play the in-form Miriam Longo from the get-go (instead of Žigić), and why he left Nora Heroum, who is normally a starter, on the bench as well. Perhaps if all of our starters had been available and been in fine form we could have avoided this loss. But for now, we’ll never know.

The initial experiment didn’t work, and the results speak for itself. This is the first time the Milan Women have lost a game at home. Now they’ll have to pick up the pieces from this broken mess and glue themselves back together.

Where do we go from here?

Milan’s next game will be against Roma on Monday, January 20th. Playing on a Monday is strange enough, but the fact that the game will be at 12:30 PM CEST is just a textbook example of poor planning. (One guess as to who’s responsible for this scheduling faux pas, and I’ll give you a hint: It’s not the FIGC. Or Roma.)

Roma is currently one of Milan’s direct rivals for Champions League qualification. So far, they’ve registered only three losses this season, including their opener against Milan. (Milan, on the other hand, has only had two losses.)

The only thing that will give the Milanisti any hope now, is the fact that the Rossonere tend to turn it up against the ‘Big’ teams. And it doesn’t get any bigger than Roma, with their bevy of Italy internationals and FIFPRO finalists too.

There are no more excuses now. Ganz and the rest of Milan will have to analyze the mistakes they’ve made, and do their best to fix them. They will then need to implement those changes, in order to win this upcoming game.

Otherwise, if we lose the game against Roma, then the illuminating light of the Champions League, will fade off into the distance and become a dying dream.