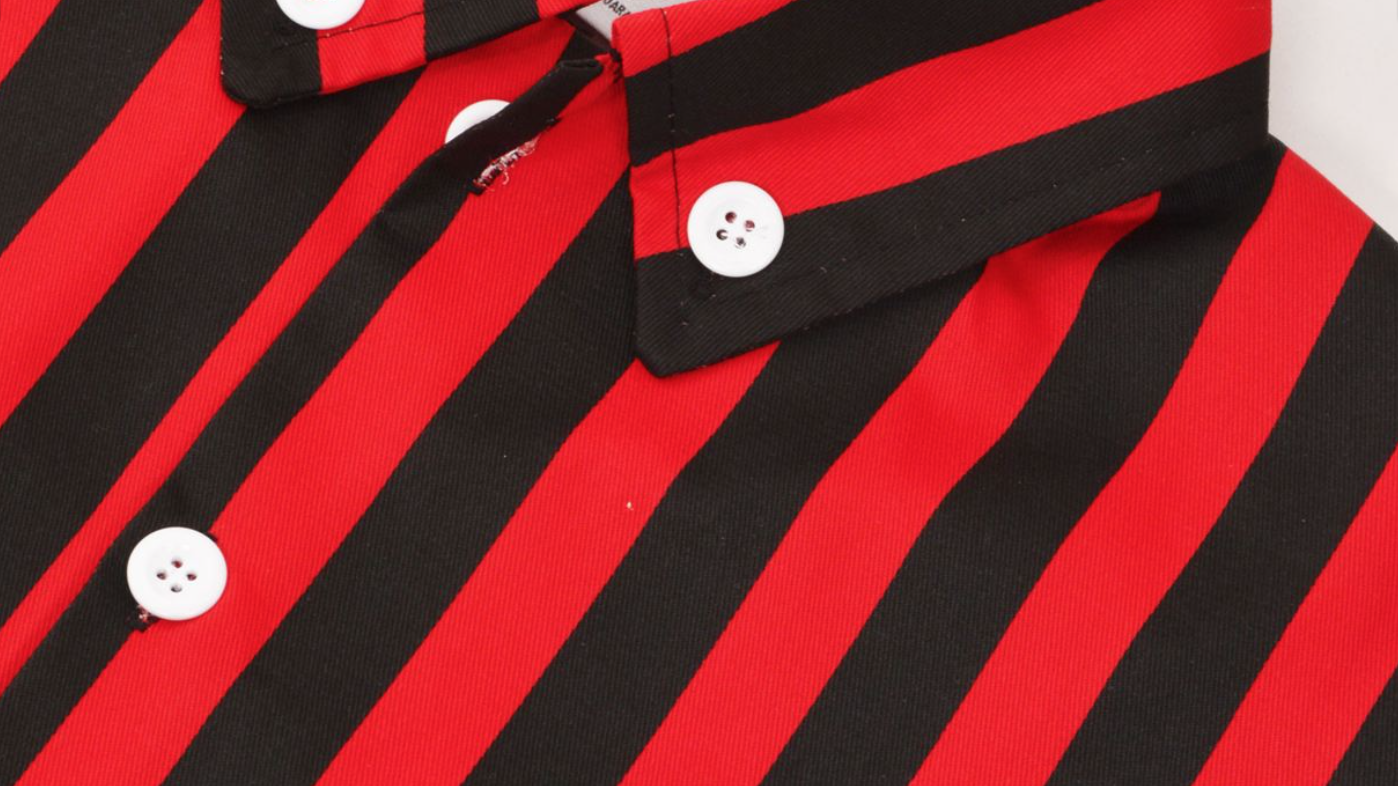 The Fabric of Milan: A tale in red and black

The famous Rossoneri shirt. So many incarnations over the years, but the red and black has remained a constant throughout our illustrious 107 year history.

From the very foundations of the history of Milan came the colours the club still wears to this day. The founder of the Milan Cricket and Football Club, Nottingham butcher Herbert Kilpin, proclaimed that the colours would be black to signify the fear of our enemy, and red the colour of the devil. 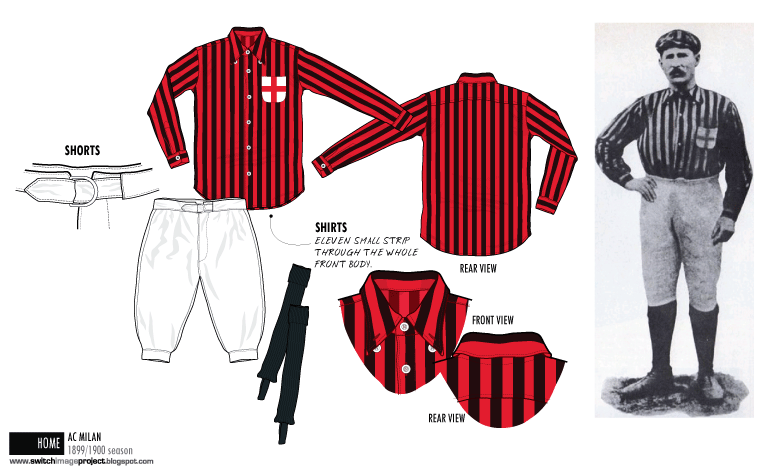 With the white baggy pants, the belt around the waist and the thin stripes, this iconic Milan jersey is one that means so much to the club as a while.

The St. George Cross adorns the chest area, perhaps as a nod to Kilpin’s homeland, or perhaps due to it being already established as the flag of Milan, which in itself is a city with lots of English heritage.

The season was not entirely successful for the newly established team, as they progressed to the second round of the Italian Football Championship by default (being the only registered Lombardy team) before losing 3-0 to FBC Torinese, with Genoa eventually winning their third title. 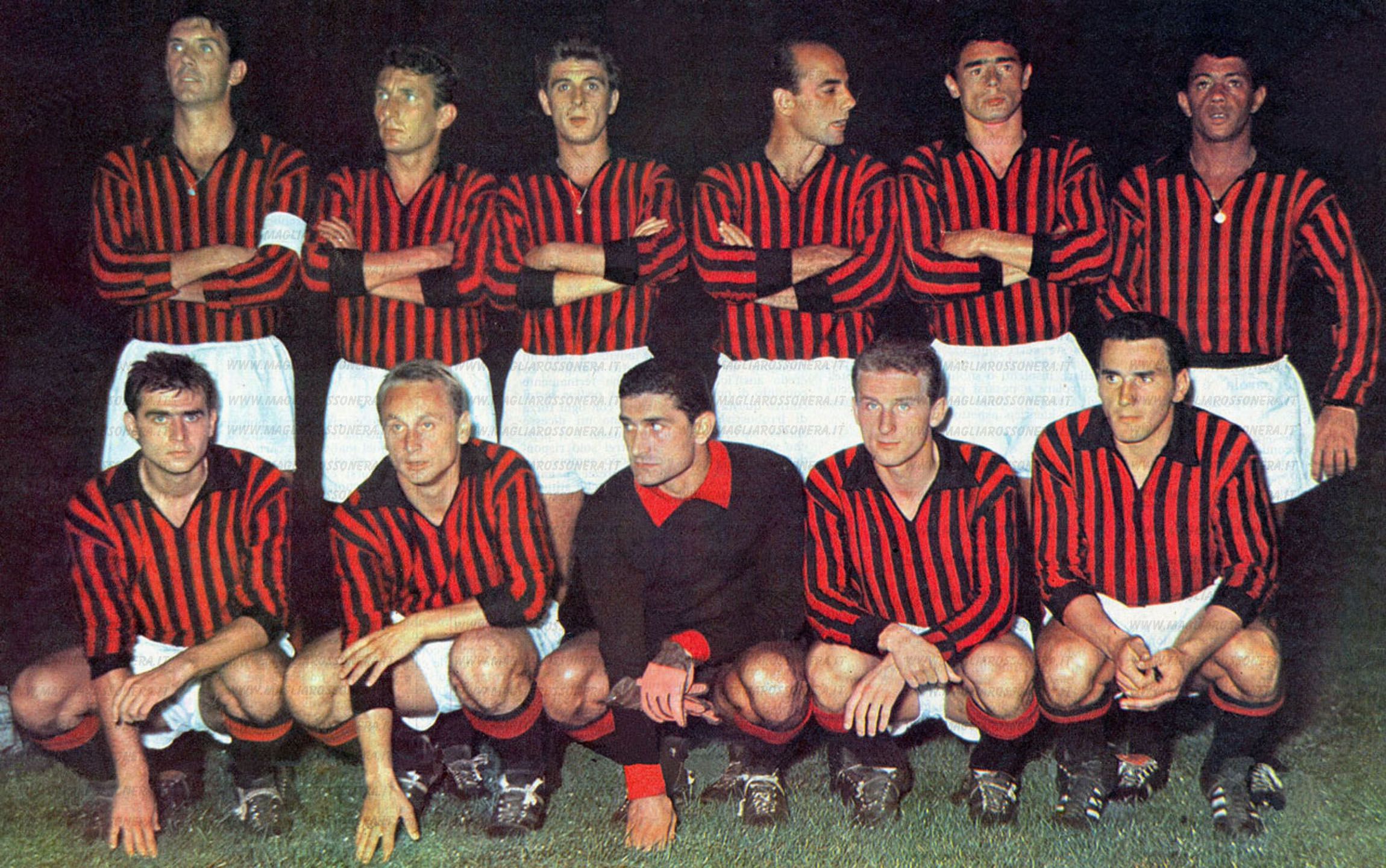 A jump ahead now to the 1960s, the decade in which Milan achieved their first continental glory in the form of a 1962-63 European Cup win.

The above jerseys were worn by the team, managed by Nereo Rocco, as they went about causing continental havoc, even recording a 14-0 aggregate victory over Union Luxembourg en route to a 2-1 win in the final versus Eusebio’s Benfica.

With the thin stripes, lack of sponsorship and manufacturer, plus the classic white shorts, the above uniform meant that Milan looked sharp during their first taste of European glory. 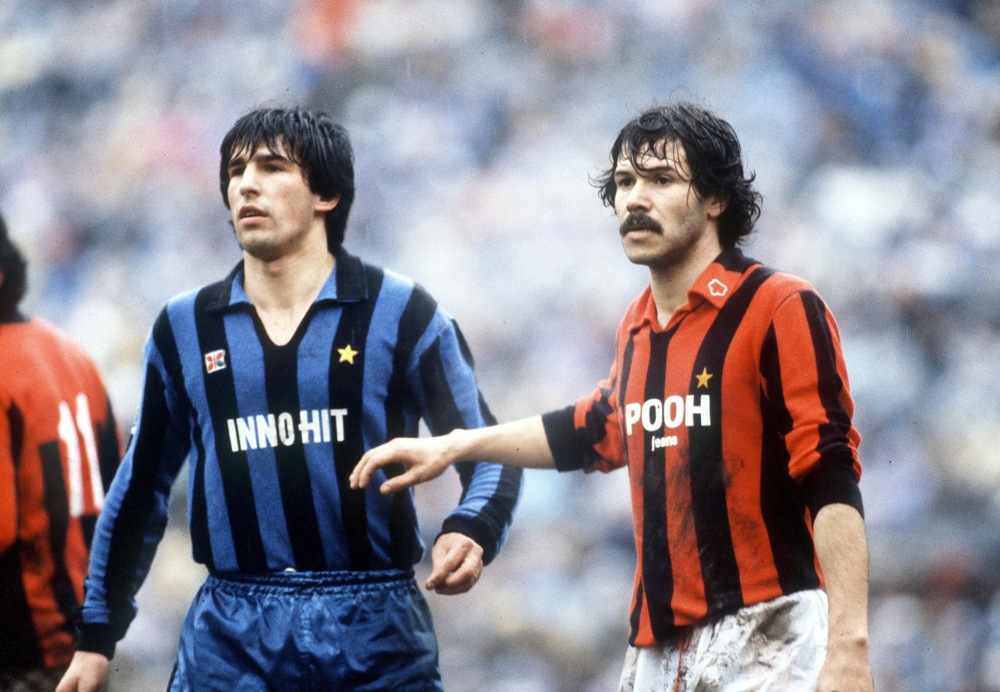 Milan made the transition into the new era of football in 1981-82 with the above shirt.

The jersey, which sports thicker red and black stripes than seen in the previous two, was the first to carry a sponsor on it, namely the brand ‘Pooh Jeans’, which only lasted one season before Hitachi became the new sponsors.

From a football point of view, the season was not a successful one. Having just been promoted from the second tier, the team was relegated back to Serie B with 24 points (it was two points for a win then) before returning to Serie A again for the 1983-84 season. 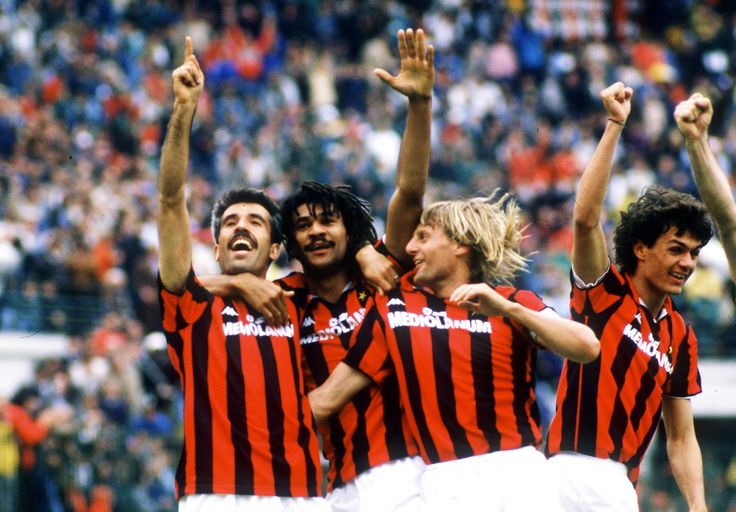 The previous season to what is seen above, Silvio Berlusconi became outright owner of AC Milan and promised to take the club to new heights.

In the period that the Rossoneri wore the Kappa Mediolanum shirt, the team won six trophies, including a Scudetto, two European Cups, a Supercoppa and an Intercontinental Cup.

The shirt was seen in three different incarnations. Firstly came the one seen above, with simply a gold star on the chest to signify 10 Scudetto wins. Then came the Scudetto shield in 1988-89, followed by the mini cup the next season. 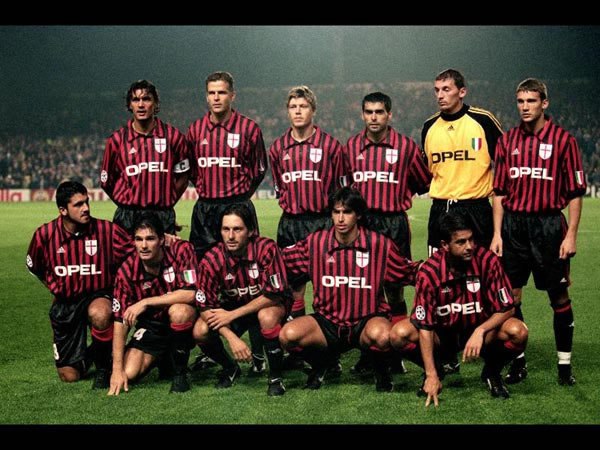 The celebration of a century came during the 1999-2000 season with the above special edition.

A throwback to the old crest, with Scudetto patch on sleeves and Champions League patch on the other, this is an instant classic from Adidas that represents 100 years of wonderful history.

It was a mediocre season on the field. Milan finished third in the Serie A standings with 61 points, and crashed out in the group stages of the Champions League after achieving just one win in a group containing Chelsea, Hertha BSC and Galatasaray.

Still, this is one for the history books, and remains a collectors item to this day. 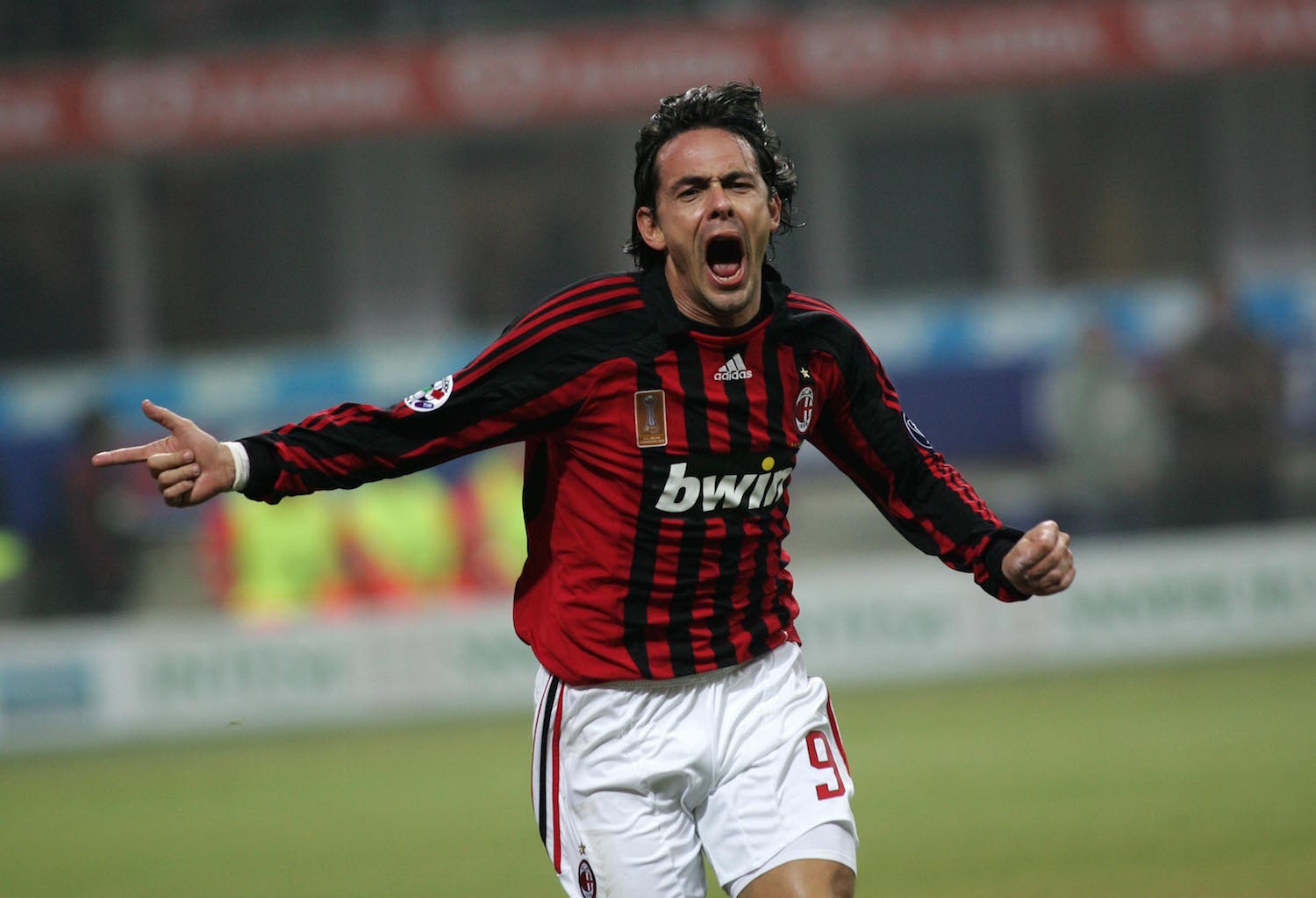 Moving closer to the present day, and we have the shirt from the season in which Champions League title number seven was captured.

Memories are still fresh of the Diavolo revenge in Athens thanks to a brace from one of our favourite sons, Pippo Inzaghi. Aside from that, it wasn’t a perfect season, with Milan finish fourth in the league and reaching the cup semi-final.

Still, Kaká’s 18 goals in all competitions lit the fuse for an exciting campaign, and cup number seven is something that may not be added to for a long time. 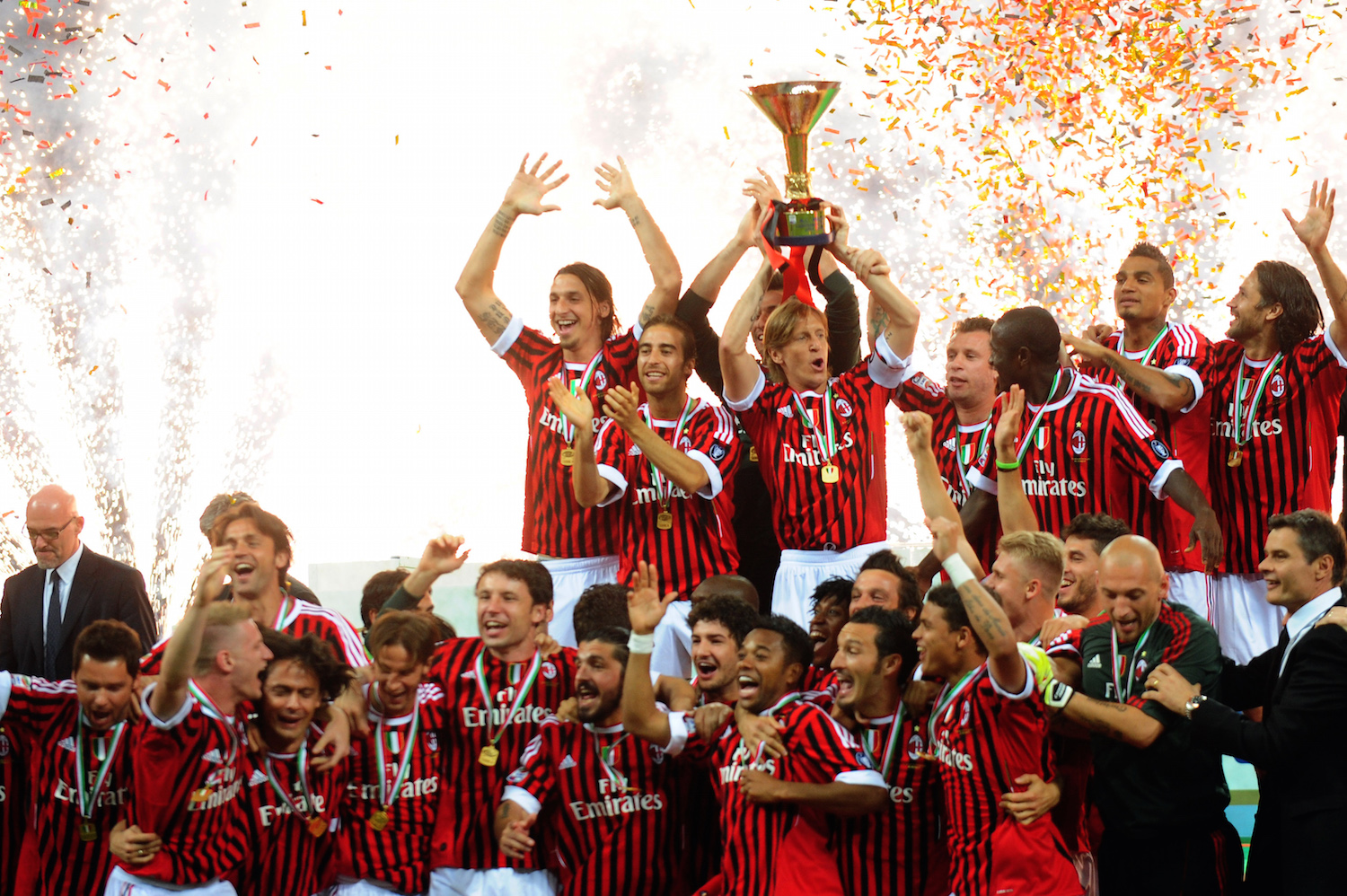 AC Milan can be seen above celebrating a Supercoppa title, and this was also the shirt that adorned the Scudetto shield for the 18th time.

Having wrapped up the title away at Roma during the season, Milan captured the Supercoppa in Beijing against rivals Inter in a Zlatan Ibrahimovic inspired performance.

This is the most recent time to date that the team has been able to celebrate a trophy on their jersey.

The question is, will this be the next shirt that Milan is able to display an achievement on? 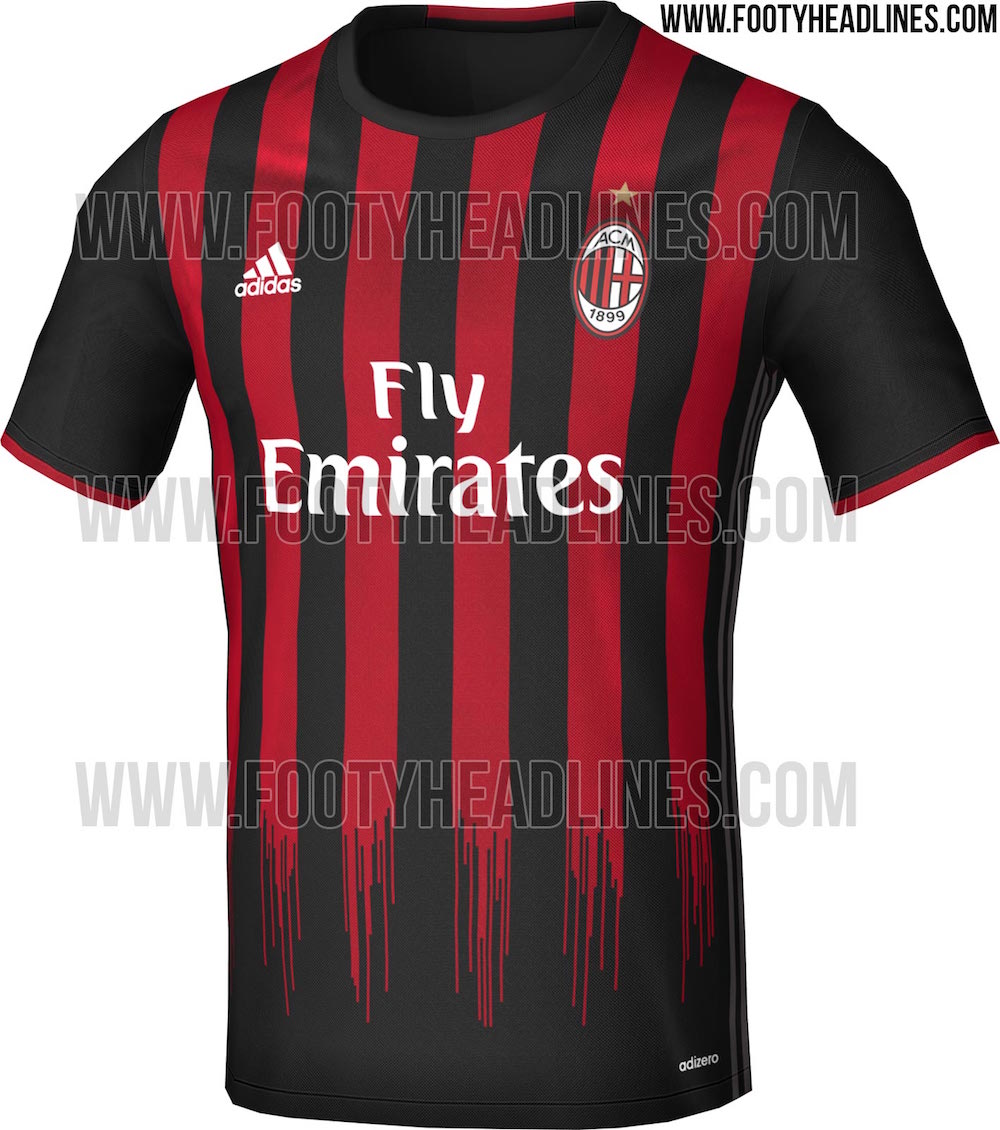 This is the leaked design for the 2016/17 AC Milan home shirt, which will be manufactured by Adidas and sponsored by Fly Emierates.

The thinner stripes, similar to the shirt above, are a throwback to more glorious eras, while the design at the bottom lends itself to the roof of the iconic Duomo.

A little tricolour Coppa Italia patch would look pretty good in the middle of there too.