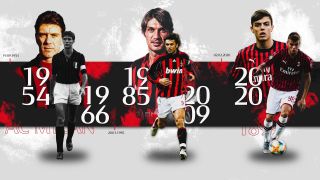 It may not have been a night to remember result-wise, but it was certainly a landmark evening once again for the Maldini dynasty.

As MilanNews reports, in the 80th minute of the game between Milan and Juventus last night Daniel Maldini came on for Davide Calabria, thus reaching six appearances with the Rossoneri shirt. The important fact, however, is that yesterday the Maldini family reached 1000 appearances in Serie A with Milan.

This is especially incredible given that Milan have played 2918 official Serie A matches as a club in their entire history, meaning the surname ‘Maldini’ has been on the back of a Rossoneri shirt for more than a third of the history of this club.

The greatest gift he gave to the club was his legacy and his son Paolo. Before Christmas he was voted as the best left-back in football history by France Football, and he made his debut with Milan at the age of sixteen and 208 days, on January 20, 1985.

Now it is up to Daniel to continue the dynasty. It is highly unlikely that he will reach the results and records of his father, but reading “Maldini” on the back of a Milan shirt is and will always be exciting.

READ MORE: The reasons to still be optimistic despite the loss vs. Juventus