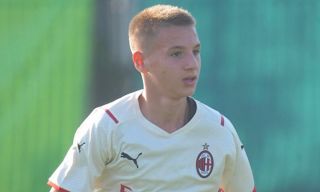 AC Milan currently have a young striker who has to be the most prolific player in his age group, with simply incredible numbers.

We have to thank Sciabolata Morbida on Twitter for bringing out attention to Francesco Camarda, a 13-year-old striker who is in his fifth year with Rossonero youth sector. Of course players scoring ridiculous amounts of goals is more common the further down the age groups you go, but the numbers for Camarda are simply obscene.

What must be taken to account in this is the average level of the opponents that Milan have met and also the fact that some of these games will not have been played as 11 vs. 11.

Camarda has already shown off again this year, in the U15 National A/B championship which he is playing in as an underage player, having moved up a year to the 2007-class Milan side (which includes Seedorf’s son, Denzel Miguel Viana Seedorf).

At the weekend the U15 side snatched three points from Verona thanks to the young Francesco Camarda who – despite playing against players mostly older than him – scored a match-winning brace. Certainly one to keep an eye on.