AC Milan and the Champions League trophy (European Cup) go hand in hand. The club is synonymous with the competition and are still the second most successful club in the tournament’s history.

With the recent resurgence of Milan back into the competition – with Stefano Pioli’s men achieving a commendable second-placed finish last season – we thought it would be a good time to reminisce, look back and rank the sides in Milan’s history that have lifted the presigious trophy.

A final of great magnitude for Milan, as they claimed a consecutive victory after the 1988-89 season and were the last team to do so before Real Madrid in 2017. A team boasting Milan legends such as Maldini, Baresi, Costacurta and of course the fabled ‘Three Dutchmen’ – Rijkaard, Gullit and Van Basten.

Utilising an effective 4-4-2 against Benfica the match was very tight, with very few chances for both sides to get ahead. However, with the legendary Arrigo Sacchi at the helm, having won the year previous in impressive fashion, the power was in Milan’s hands to win it again.

And with that said, the last addition to the Dutch triumvirate in Frank Rijkaard scored the only goal of the match after a blistering run in the 68th minute. As with all the teams on this list, they are all impressive and all sensational, but this is in seventh place just due to the overall performance of the team and the final being a fairly underwhelming spectacle.

However, this team and especially Sacchi cemented Milan as an even more legendary European giant by being part of an incredibly prestigious and limited group of teams to have won the trophy consecutively.

Next on this list is the aforementioned first victory by Sacchi’s side arriving at the final after a fantastic run including an emphatic two-legged contest against Real Madrid where Milan won 6-1 on aggregate.

Featuring an almost identical starting 11 to the year after, this team encapsulated everything that is Milan by claiming superiority over Europe after a 20-year slump in this competition. The match was against unlikely finalists Steaua București who did have the renowned playmaker Hagi in their ranks, but a brace from both Ruud Gullit and Marco Van Basten proved too much for them to handle.

This game captured the essence of Sacchi’s philosophy with the team steamrolling the Romanian outfit. Gullit opened in the scoring in just 18 minutes after a perfect passage of play from the Rossoneri which allowed Gullit to slot the first home to an empty net. Then before the end of the first half Van Basten lasered a close-range header securing the second goal.

Sacchi’s men were not done in that half, as Gullit before the strike of half-time teed himself up for a fantastic half volley finding the back of the net 18 yards out. It was safe to say at this point that București were outplayed and already had their bags packed for home before re-entering the pitch for the second 45.

It wasn’t long after the second half began – the 47th minute to be exact – that a lovely through ball played by Rijkaard sealed the victory for Il Diavolo and Milan claimed the European cup after 20 years.

Another fantastic final that claims sixth place on our list, mainly due to the ease of the victory and the quality of opponent faced, however it was a legendary victory that laid the groundwork for Sacchi’s European dominance.

This was a fairly difficult run for the Rossoneri on route to the final, with a particularly close clash with a Manchester United featuring household names such as Bobby Charlton and George Best. However, this was an AC Milan possessed, possessed to claim victory in Europe’s top footballing competition.

Most notable were the contributions Gianni Rivera, Angelo Sormani and primarily the wonderful Piernino Prati who provided a fantastic hat-trick. The murmurings at the time were that this was Ajax’s season to win, with them becoming the first Dutch team to ever reach a European final and boasting arguably the world’s most impressive player at the time, Johan Cruyff. The signs were there for them to make history.

However, how the Rossoneri proved everyone wrong, the match played into the favour of Milan right from the first whistle, with fairly dominant passages of play and numerous chances straight away. It took Prati just 7 minutes to open the scoring before doubling up before half time.

The third goal came by way of a dubious penalty call by the referee that allowed Ajax back into the game. With that being said and with Cruyff proving to be fairly anonymous by his standards, Sormani scored the third in the 66th minute, before Prati confirmed Milan’s second ever European trophy by delivering his hat-trick in the 74th minute.

This final gets fifth place for us, due to the fantastic performances by Milan in the fixtures leading up to the final and in particular Fabio Cudicini’s heroics at Old Trafford against United.

An absolutely legendary final and competition being an all-Italian affair, this particular occasion lives in the heart of every Rossoneri fan as Marcello Lippi’s men gained infamous bragging rights defeating Juventus.

In this competition Milan were flying, achieving top of their group in emphatic fashion, beating the likes of Real Madrid and Bayern Munich on the way to the latter stages. In fact, Milan were so convincing on the build up to the final, they lost only two games (both in the group stages) the entire run.

This proved to be a fairly cagey affair, as you can imagine, the final two teams being Italy’s two most successful clubs and fiercest rivals. The match started off fast and snappy, before dying out just as briskly with both sides eager to not give each other an inch of ground, which resulted in both sides sitting back.

There were some very close calls of the limited chances, including a narrowly wide effort from Antonio Conte of Juventus and Andrea Pirlo hitting the crossbar for Milan. With Juventus down to 10 men due to injuries and having made all their substitutions the game was drawn out all the way to penalties.

As if the match couldn’t be more tense, the penalties proved to be a supremely nerve-racking affair. Both teams missed a few penalties, highlighting the huge pressure both felt at the time. But, one moment that will live on forever in the hearts of all Milanisti was Andriy Shevchenko’s penalty that sealed the victory.

After having a goal disallowed in normal time, it was only right that Milan’s legendary striker propelled the club to its sixth European title. This final showing gains fourth even though it may be some fans’ favourite especially beating Juventus, mainly as the last three finals provided such spectacular performances and narratives. 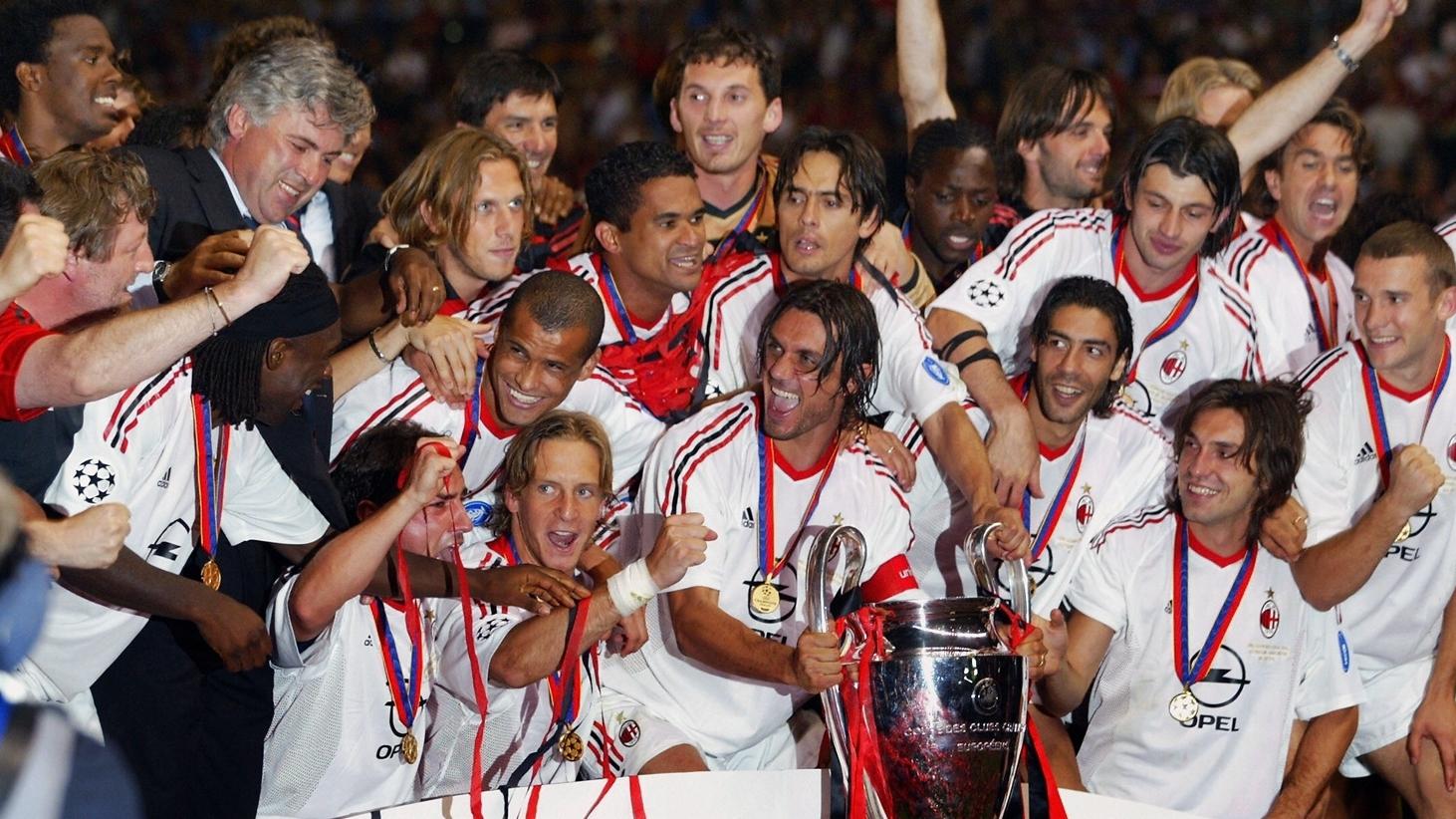 Claiming third on this list is the final that started it all. With Nereo Rocco’s men claiming a hard-fought victory against Benfica led by the legendary and at the time best player in the world Eusébio. This was also a classically iconic Milan side, boasting Giovanni Trapattoni, Gianni Rivera, Jose Altafini and of course the household name and father of Paolo Maldini, Cesare Maldini.

The road to the final showcased how dominant AC Milan can be with a 14-0 aggregate score against Union Luxembourg with Altafini scoring eight.

However, the final itself proved to be a much tighter affair. It looked to be Benfica’s night as the explosive and powerful Eusébio put them 1-0 up inside 19 minutes. Despite this, the Rossoneri held firm, and the man of the tournament came up trumps with Altafini scoring Milan’s first in the 58th minute, and only 11 minutes later scoring the winning goal.

This gets third place for us as it was not only the final that started Milan’s long history with the ‘big eared’ trophy, but it really cemented AC Milan as a ‘giant’ killer and showing that a good team with great tactics can always triumph over a side boasting one of the world’s best players.

Another illustrious final in Champions League history, featuring Fabio Capello’s ‘invincibles’ against a start-studded Barcelona featuring a familiar face to Milan, at the helm of that Barca team, that of Johan Cruyff.

All the papers and news outlets at the time favoured Barcelona, although again Milan were not ‘underdogs’ as such, as they had an amazing team one that had been dominating domestically, it was viewed as far inferior to the Barcelona team Cryuff had assembled.

Further to this, was that Milan’s preparation for the final was disastrous, star striker and elite Champions League goal scorer Van Basten was still out with a long-term injury. Not only Van Basten, but Gianluigi Lentini (the then world’s most expensive footballer) Alessandro Costacurta and icon Franco Baresi were all out as well.

However, this did not faze Capello and from the off the Rossoneri absolutely dominated. The dismantling of Barcelona started with Daniele Massaro scoring twice before half-time. Then almost as soon as the second half began Dejan Savićević scored, before new signing Marcel Desailly (who had one the trophy with Marseille the year prior) scored in the 58th minute by overcoming a weak offside trap, sealing Barcelona and Cruyff’s defeat with a 4-0 walloping.

This victory could easily top the list as it was just so emphatic a performance that even the Barcelona goalkeeper at the time Andoni Zubizaretta declared it as “just perfect”. Moreover, it was such a blisteringly convincing game played by il Diavolo that it effectively ended the dominance Barcelona had enjoyed and closed the curtain on one of their ‘golden eras’. 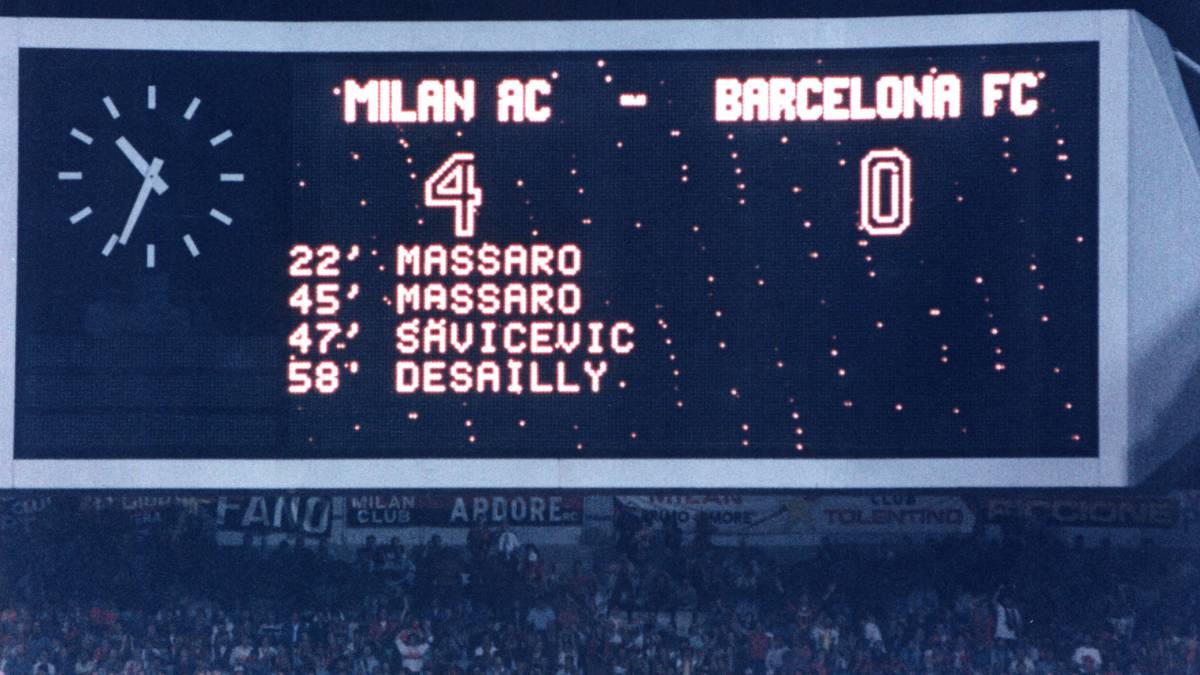 It had to be. This game and this narrative needs no introduction. The Champions League matches between Liverpool and AC Milan are always electric, both offering some of the best European atmospheres and heritage in the competition.

However, no precursor, no storyline has more weight than that of the two finals between the two clubs, that of 2005 and of course the one in question. After what can only be described as a miracle by Liverpool and notably their captain Steven Gerrard just two seasons prior, the opportunity to avenge what should have already been the club’s seventh trophy was undeniable.

Milan’s road to the final was mixed, some dominant performances and some close calls, whilst almost all of Liverpool’s were close-knit affairs. Therefore, for almost the first time in the 10 previous finals Milan had participated in, this was one where they were clear favourites. However, of all the teams to upset them Liverpool proved they were it, and the Rossoneri were determined for history not to repeat itself.

The first goal came by way of a lucky deflection off Filippo Inzaghi from one of Andrea Pirlo’s free-kicks. Then Inzaghi as he was renowned for, masterfully ran in behind stretching the offside rule to its max and slotted home the second. However, there was late drama when Dirk Kuyt scored Liverpool’s only goal of the game, but it was too late and the Rossoneri won their seventh Champions League, concluding the saga that had started 2 years ago.

This final tops the list for many reasons, but most importantly it is because of the narrative, the story that had started in Istanbul 2 years prior, the trophy that should have been. It also encapsulated all the emotion of the fans, the team and the club in that time.

To this day, it remains as one of the most legendary finals not because of the performance, but because of the story and that it showcases what makes AC Milan shine with the champions league; not only is the club the second most successful in the competition of all time, providing some of the most entertaining matches, the Rossoneri and the Champions League offer the best stories, the same stories that resonate with all fans of all clubs and the entire footballing world forever.

After every Istanbul, there is an Athens. 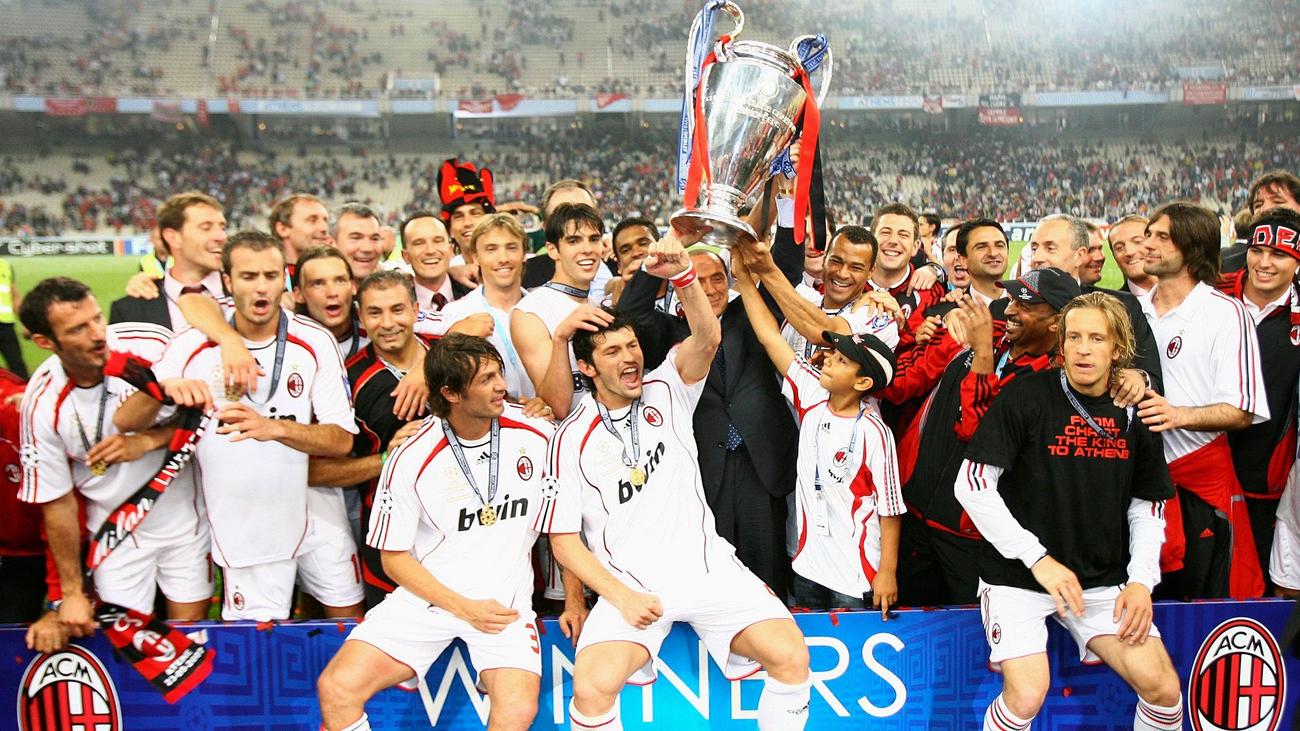