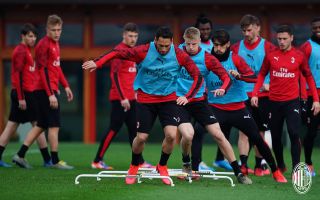 As the game against Genoa was postponed until May, initially scheduled for today, AC Milan returned to the training ground. Now, they are focused on getting ready for the important clash with Juventus on Wednesday.

Heading into the return leg, which will be played at Allianz Stadium, with an aggregate score of 1-1, the Rossoneri have a tough task ahead. However, an extra incentive has arrived, as the Coppa Italia final will take place at San Siro.

The squad began the session in the gym, per the club’s report, before heading out on the pitch for technical drills. Initially, they worked on one-on-one situations at high pace, finishing this phase with ball possession.

To end the session, they played a game on a smaller-sized pitch. Just three days away from the big game, in other words, Stefano Pioli’s men continue to work hard at Milanello to be as ready as possible.

READ MORE: Milan fan who travelled from Chile for Milan-Genoa says he ‘had been saving for years’