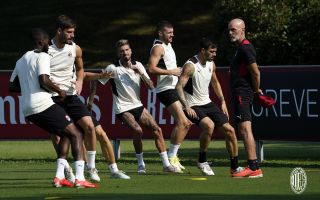 AC Milan will take on Lazio, Liverpool and Juventus after the international break so you can understand why all of the training sessions are important. Stefano Pioli has decided to grant them some time off, though.

A total of 13 players are out on international duty so the manager has been working with a decimated squad anyway. During today’s session, as confirmed by the official website, the Primavera side trained with the first team.

At the end of the session, there was a training match of two 25-minute halves between the two sides. As mentioned, Pioli has decided to give the players some time off as they will resume training on Tuesday in the afternoon.

The game against Lazio will take place on Sunday evening next week, so there is still plenty of time for Milan to prepare for the game. After that, they will face Liverpool and Juventus, so it won’t be an easy week.

READ MORE: The latest on Ibrahimovic’s ventures off the pitch – from padel to real estate